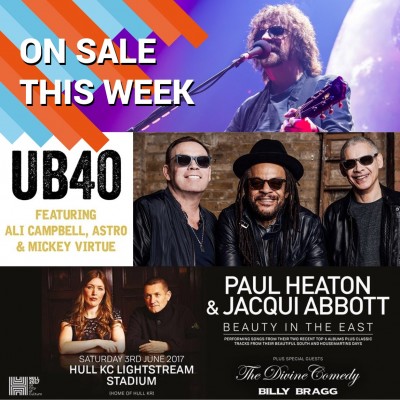 Hull welcomes back its finest adoptive son Paul Heaton and the Welsh wonder Jacqui Abbott for a very special one off show at the magnificent KC Lightstream Stadium where the pair will perform songs from their two recent Top 5 albums plus classic hits from The Beautiful South and The Housemartins.

Joining them for the unmissable evening on Saturday 3rd of June will be witty Northern Irish charmers The Divine Comedy and left-wing folk hero Billy Bragg who play support.

The concert is timed perfectly to take place amidst the summer of 2017, a year that sees Hull declared UK City Of Culture in recognition of the unique rich tapestry of art, music, theatre and more which the fine northern city crafts.

UB40 are one of the most famous names in British pop history. They have enjoyed a career which has seen them release over forty UK Top 40 hit singles and achieve sales of over 100 million records which has made them into a household name. They have topped the charts both here in the US with such smash hit singles as I Got You Babe, I Can’t Help Falling In Love With You and Red Red Wine.

Fusing reggae, pop, R&B and dub, UB40 featuring Ali Campbel, Astro and Mickey are the perfect band for the long hot nights and have just announced dates for late spring and summer in the new year. Tickets are released on Friday and expected to sell fast!

Known for their truly epic live shows encompassing a huge back catalogue of mind blowing material which covers everything from rock, pop, classical and beyond; Jeff Lynne's ELO are preparing to blow you away once more.

Having established himself as one of the greatest record producers in musical history, Jeff Lynne has penned some of the most recognising music ever and ELO have produced twenty six Top 40 singles and sold over 50 million records worldwide over the past 40 years.

Not only will they perform at the immense Wembley Stadium in London but they have recently announced that they will also be making a headline performance Sheffield Arena. Get your tickets for these exciting June shows with Gigantic!

The Beach Boys are amongst the most famous bands of all time and they have just announced two highly exciting upcoming shows at Scarborough Open Air Theatre and East Links Arena at Montrose to go on sale this Friday with Gigantic. Their Royal Albert Hall shows are selling out quickly so get yourself ready for their release by setting a personal reminder right now!

Emotive MC Loyle Carner has been amassing a huge audience and impressing critics with his unique style of eloquent hip hop. Channelling anger, despair, joy and loss into jazz enthused beats, Carner is proving to become an immense creative force. Tickets for his February tour are released this week.

The Menzingers are getting ready to headline KOKO in London on Wednesday 19th of April, 2017. The Pennsylvanian punks are known for their self-deprecating lyrics and will release their new album After The Party next year. Tickets are on sale very soon.

We are really excited here at Gigantic for the huge plethora of fantastic folk singers that have announced new dates. On sale this week we have the swarthy Jack Savoretti, singing sensation Seth Lakeman, jazz inspired Jesca Hoop and Angel Olsen promoting new album My Woman.

Get ready to rock because Skunk Anansie are headlining O2 Academy Bristol following the release of new album Anarchytecture. Metal fans will also be looking forward to the While She Sleeps and Haken tour. Plus we have high energy shows from Estrons, New Model Army and 2 Tone greats The Selecter & The Beat all about to be released.

Also on sale this week are a great range of experiment artists for those who have a taste for the experimental and eclectic. Gruff Rhys will be performing his soundtrack to new film Fire To The Stars live, De La Soul head out on tour to promote And The Anonymous Nobody…, Cigarettes After Sex hit the UK and funky hip hop instrumentalists BADBADNOTGOOD play London.

Other essential acts going on sale with Gigantic this week include:

Ultimate 80’s festival Let’s Rock The Moor! have now confirmed that Orchestral Manoeuvres In The Dark will be performing at their exciting retro extravaganza. The festival is famed for offering the very best bands and performers from the decadent decade of perms, shoulder pads and shell suits.

Other incredible acts joining OMD will be Howard Jones, Sister Sledge, Tiffany and many more. So book today for a fantastic time for all the family!

This is your last chance to get tickets for heavy Orlando band Alter Bridge. The metallers have released new album The Last Hero and the new material is expected to feature prominently at the gigs. With nearly all the bands shows coming close to selling out, if not already, you need to act fast to not miss out!

Comedian Miles Jupp lays waste to political establishment in his new show Songs Of Freedom. His satirical stand up sketch sees him eloquently tear apart both the idiotic decisions made at Whitehall and the trivial terrors that plague everyday British life.

Black Stone Cherry are an exciting mix of southern style rock with heavy grunge overtones. Having just released their sixth studio album Kentucky, they are ready to return to the UK to promote the new release with exhilarating live shows.

Gigantic always has tickets for the most inventive and imaginative artists offering the most mesmerising shows. Book now for dub stars Dreadzone, enjoy the poetic prowess of Dr John Cooper Clarke and keep it unreal with funky DJ Mr Scruff.

And finally, Gigantic also has tickets for: