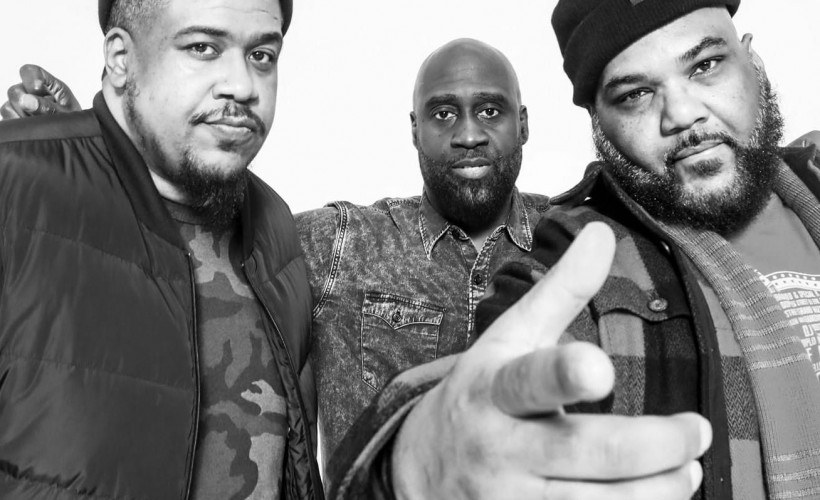 Ultimate hip hop trio De La Soul are known for their eclectic use of samples, deft lyrical skill and incredible tracks. The jazz rap pioneers are amongst the most important forces in global hip hop.

Following the release of ninth studio album And The Anonymous Nobody… last year they thrilled audiences when they played UK dates to promote the new material.

Widely considered a hip-hop masterpiece, De La Soul’s debut album, 3 Feet High And Rising, was hailed on its release as the future of the genre. A colourful burst of neo-psychedelic samples and playful wordplay plus the trio’s trademark witty skits and lyrics, the album sounded like nothing else in hip-hop. True pioneers, De La Soul, eschewed the obvious influences of old-school rap or funk and spread their net wider, taking in pop, jazz, reggae and psychedelia.

Album of the Year on its release - a measure of 3 Feet High and Rising's cross-over appeal was the fact that it was voted Album of the Year by NME. De La Soul continue to garner awards, more recently in 2006, when they won a Grammy for their collaboration with Gorillaz on the single “Feel Good Inc”.

Their success has continued with the release of another eight incredibly studio albums including their best-selling new release And The Anonymous Nobody… which sold more than 21,000 copies in the first week alone.

Because De La Soul concert tickets are such hot property you really need to book early as there are limited amounts and we do not want to disappoint. Always make Gigantic your first choice for the very best gig tickets.


When are De La Soulplaying live

Get your De La Soul gig tickets with Gigantic.

Where can I get De La Soul tickets

MEUTE show tickets are released on Fri 1st April at 10:00am with Gigantic.


Are you a music lover?

Gigantic tickets always has an excellent selection of tickets, ensuring you have a stress-free experience when booking for the very best gigs and festivals.

Make sure you set a personal reminder, and we can alert you with a text or email when De La Soul concert tickets go on sale.

At the time of its 1989 release, De La Soul's debut album, 3 Feet High and Rising, was hailed as the future of hip-hop. With its colorful, neo-psychedelic collage of samples and styles, plus the Long Island trio's low-key, clever rhymes and goofy humor, the record sounded like nothing else in hip-hop. Where most of their contemporaries drew directly from old-school rap, funk, De La Soul were gentler and more eclectic, taking in not only funk and soul, but also pop, jazz, reggae, and psychedelia. De La Soul continued the development of their innovative style as trends in rap came and went. They released albums at a steady clip up until the time of 2004's The Grind Date, but returned in 2016 with the crowdfunded And the Anonymous Nobody as well as the occasional stand-alone track.