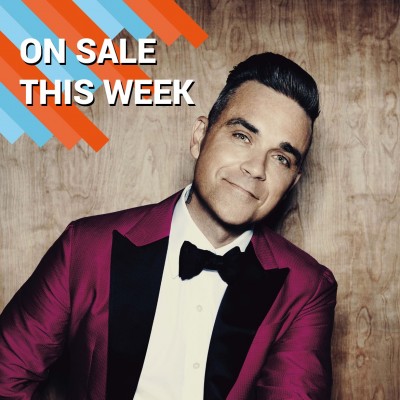 Join the irrepressible Robbie Williams as he makes his long-awaited return to the stage with The Heavy Entertainment Show Tour. The cheeky chap has been captivating audiences since being teen idol in Take That from which he progressed into an international solo superstar.

Not only will Robbie be performing material from his new album The Heavy Entertainment Show, you can bet he will be performing hits from his stunning back catalogue of smash hits which include Angels, Millennium, Rock DJ and Let Me Entertain You.

Robbie was entered into the Guinness Book Of Records when he sold a staggering 1.6 million tickets for his 2006 tour in a single day! Set a personal reminder with Gigantic right now to prepare for their release on Friday.

Cliff Richards has enjoyed a career that spans over 50 years and has shaped the sound of pop music with such hits as Congratulations, Living Doll, Devil Woman and We Don’t Talk Anymore, plus many more!

So join the living legend as he embarks on his exciting tour in promotion of his brand new album entitled Just… Fabulous Rock’n’Roll. The soon-to-be released record sees Cliff return to the golden era of rock and roll with brand new renditions of such classics as Great Balls Of Fire, Sweet Little Sixteen and Roll Over Beethoven plus his very own debut single Move It.  The newly announced tour takes him to the UK’s most beautiful castles and iconic historical locations fashioned to create wonderfully intimate arenas.

The world’s greatest 80’s retro festival returns to the capital city. The day festival is a wonderful occasion for all the family at which the audience is encouraged to dress up in the wacky fashion from the time and are treated to celebrity presenters.

This year sees a stellar line up of stars including The Human League, Sister Sledge, Howard Jones plus more for what will be an incredible day to be enjoyed by all.

and the Anonymous Nobody... by supreme hip hop group De La Soul is one of the year’s hottest album releases. The band new record by the New York trio Posdnous, Dave and Maseo gathers together a huge array of the world’s most formidable musical talent with tracks featuring the likes of Usher, Damon Albarn, Justin Hawkins and Snoop Dogg.

De La Soul have continued to be a tremendous creative force that has continued to push forward the possibilities of Hip Hop. It is the latest release in an illustrious career which has seen them enjoy worldwide fame and win a Grammy Award for their collaborative efforts with Gorillaz.

London post punk heroes White Lies have announced a huge tour for the new year. It follows their November and December dates promoting their new album Friends. The band merge a dark sound with a swelling euphoria which has seen them top the charts with previous albums To Lose My Life…, Ritual and Big TV. Their tickets are released at 09:00 on Friday.

Party band two piece Japandroids are known for their unmissable live shows. They release their brand new album Near To The Wild Heart Of Life in January of 2017 setting them up for their recently announced dates at which the new material is expected to feature heavily.

Having released their amazing album Heads Up earlier in the year, LA psychedelic wonders Warpaint will return to the UK to perform at O2 Institute Birmingham and O2 Academy Oxford. The newly released record has attracted a huge audience so book early or risk missing out!

Other awesome alternative acts coming on sale this week include indie icons The Wedding Present. they have just announced that they will be playing classic album George Best at a handful of dates. Meanwhile, fans of heavy guitar music are looking forward to the release of tickets for the tours of Leeds band Pulled Apart By Horses and Rival Sons from Long Beach. Plus, we have tickets for synth centric space rockers Moon Duo and Danish noise pop quintet Lowly.

We also have a long list of incredible singers. Modern folk legend Foy Vance has announced new shows in May and we are selling for Will Varley, Becky Hill and Declan McKenna. Plus Hull hero Calum Scott will be headlining at KOKO in London.

Spectacular post punk band Savages have announced two headline shows at The Nick Rayns LCR, Norwich and O2 Academy Brixton at the end of the month. Fronted by French singer Jehnny Beth, the London band have thrilled their fans with the two albums Silence Yourself and Adore Life whilst earning a reputation for ferocious live shows.

Get your tickets from our fine range of exquisite indie bands. Tall Ships are poised to release new album Impressions, D.I.D have December dates and Cud play the iconic 100 Club in London.

If you like it a bit brasher, we have blues rock band Monster Truck and hardcore punks SNFU on sale.