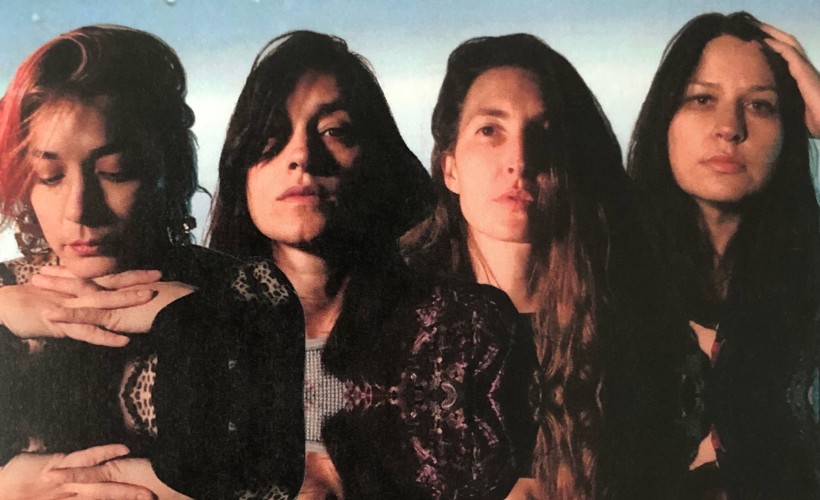 
Warpaint are the most creative band for a generation. Drawing on psychedelic influences and elements of art rock the band have quickly established a cult following and continue to push themselves to produce ever more exciting music.

Band members include guitarists Emily Kokal and Theresa Wayman who also share vocals, Jenny Lee Lindburg on bass and providing backing vocals plus drummer Stella Mozgawa who joined the band in 2009 just prior to their signing to Rough Trade.

Today the critically acclaimed LA-quartet Warpaint announce a UK and European tour for Spring/Summer 2022, and tease details of a new album. Kicking off in May with five UK dates, including London’s The Roundhouse, the tour will see the band visit thirteen cities across seven countries, rounding off at Primavera Sound in Barcelona.

Your Warpaint tickets are about to become available but are expected to sell out quickly - so book before they are gone! You can make yourself ready for their release by setting a personal reminder with Gigantic to arrive via text message or email.

Since the band’s inception in 2010, breaking onto the global scene with widely praised debut album ‘The Fool’, Warpaint have gained cult-like status and confounded expectations; releasing two more studio albums, 2014’s ‘Warpaint’ and 2016’s ‘Heads Up’. The four-piece are renowned for creating sensual mood atmospheres; gauzy guitars, hypnotic harmonies and sinister grooves. The sound and live show always come back to what can be described as feminine energy: intuitive, innate and deeply connected.

There is always a sense of arriving and returning with Warpaint. Band members have released solo works - from TT’s acclaimed 2018 LoveLaw to jennylee’s Right On! - in which you can hear the inflections of personal growth; going it alone and coming together again.

Just as they were coming together to work on a new album in 2020, the pandemic consigned them to opposite ends of the globe. Despite this, they recently released the immaculate ‘Lilys’, their first newly written music in five years and a reminder of why the band have sat at the forefront of female-fronted alternative music for a decade. Co-produced and mixed by Sam Petts-Davies (Radiohead, Frank Ocean), ‘Lilys’ has already featured on HBO’s new series Made For Love, and captures the essence of a band reunited and reconnected, never more ready for the next phase of new music, in the post-pandemic world.

As they are currently one of the hottest bands on the planet, Warpaint concert tickets are expected to sell incredibly quickly so book yours before they are gone. Stick with Gigantic for the very best range of essential gig tickets and a phenomenal experience.

The band weaves intricate guitar lines, hypnotic vocals, and driving post-punk rhythms into gorgeous, sprawling songs that skirt the line between the soundscapes of psychedelia and intimacy. The group has gone through many line-up changes, including actress Shannyn Sossamon and Red Hot Chili Peppers guitarist Josh Klinghoffer.

The Los Angeles band first began on Valentine’s Day 2004 and initially saw childhood friends Kokal and Wayman play with Lindberg and her actress sister Shannyn Sossamon playing drums. The band began work on their first EP in 2007 and featured the talents of Red Hot Chili Peppers guitarists Josh Klinghoffer on drums and mastered by John Frusciante. The six track record Exquisite Corpse was initially self-released by the band in 2008 and quickly shot to #1 in the local Amoeba Records chart. The EP was given an international release by label Manimal Records and made them the new favourite band of critics around the world.

The band signed to Rough Trade and released their debut album The Fool in 2010. Haunting and beguiling, the album is considered a sister record to the previous EP and initial limited editions of the album did also include a copy of Exquisite Corpse. The album saw the band launch into the consciousness of a wider audience and were nominated in the BBC’s poll for the Sound Of 2011.

Ever experimental, their self-titled second album Warpaint saw the band take a new approach to song writing by allowing the music to come naturally through jamming sessions. The 2014 record also began to draw from their wider music interests, such as R&B and hip hop, and saw the inclusion of new sounds from drum machines and synths. This was soon followed by the double A-side single No Way Out/I’ll Start Believing.

The band’s latest release is third album Heads Up. Recorded in LA, it saw Warpaint continue to explore an electronic sound but with more obvious mainstream appeal. The finished result is a well-constructed pop album that pleases their core fan base whilst appealing to the more casual listener.

Stella Mozgawa of Warpaint appears of audiobooks debut album ‘Now! (in a minute)’