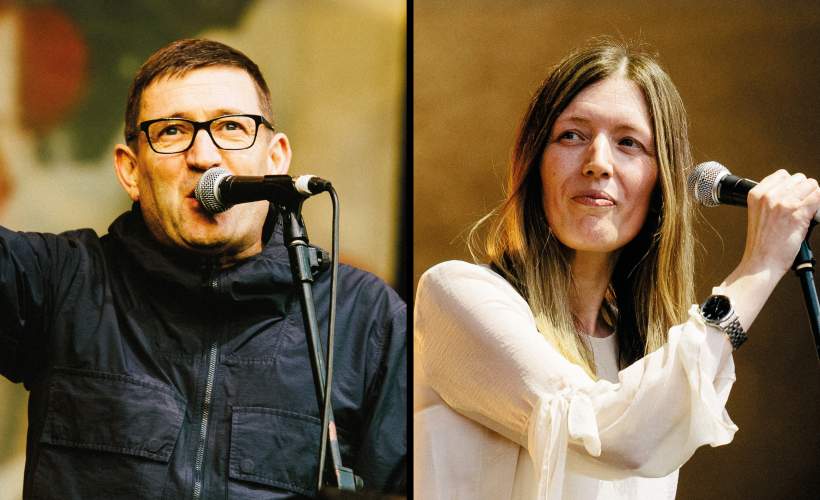 Paul Heaton and Jacqui Abbott return to centre stage for a huge night at Castlefield Bowl in Manchester on Saturday 4th of July 2020 in support of their new album Manchester Calling.
We are very excited to be getting Paul Heaton and Jacqui Abbott gig tickets into the Gigantic offices but we expect them to sell very fast - so do not hang around! Fortunately, we make it easy to make a booking as you can access our website 24/7 at home or on the go using your computer, tablet or smartphone.

We highly recommend that you set a personal reminder so we can alert you with a text message or an email as soon as they are released at 09:30 on Friday 15th of November.


Paul Heaton first began making waves as the singer for seminal indie band The Housemartins. They released two incredible albums including their breakthrough debut London 0 Hull 4 including such classic songs as Happy Hour and Think For A Minute plus follow up LP The People Who Grinned Themselves To Death which had Build plus Me And The Farmer. They would also become Christmas No.1 in 1986 with their acapella cover of Caravan Of Love.

In 1988, Heaton would and Housemartin Dave Hemingway would form hit pop group The Beautiful South who would see singer Jacqui Abbott join their ranks to sing some of their best charting singles Perfect 10 and Don’t Marry Her.

The group called it quits in 2007, having sold more than 15 million records worldwide, and Heaton shifted his focus to his solo career. He released 2008's The Cross Eyed Rambler under his own name. Two years later, Heaton returned with Acid Country, which he helped to promote with a bicycle-led U.K. pub tour. The year 2012 saw the release of Presents the 8th, a stage play that boasted a single conceptual song told in eight chapters, dealing with the seven deadly sins, and featuring guest vocalists. In 2014, he released What Have We Become?, a collaborative album recorded with the Beautiful South's Jacqui Abbott. After the warm reception of that effort, which catapulted to number three on the U.K. albums chart, the duo regrouped for 2015's Wisdom, Laughter and Lines. The success of their renewed partnership was also reflected in an extensive and well-received set of live dates, culminating in a sold-out homecoming gig to a crowd of 20,000 in Hull in 2017. That same year, Heaton and Abbott released their third record as a duo, Crooked Calypso, which was produced by longtime collaborator John Williams (Cocteau Twins, Alison Moyet).

The year 2018 brought the career-spanning The Last King of Pop, a 23-track collection representing both of Heaton's beloved bands, solo material, and his partnership with Abbott. It also offered an original duet with Abbott and an updated version of "A Little Time."

Word is getting out, but with only limited supplies of Paul Heaton and Jacqui Abbott concert tickets being made available you will have to act fast and book yours before they are all snapped up. Combining excellent customer service with a truly vast range of essential gig tickets, Gigantic should always be your first thought when looking to book for your big night out.

Get your tickets for Paul Heaton & Jacqui Abbott with Gigantic!

Madness, The Ends, Paul Heaton & Jackie Abbot plus We Love The 90's and more!

Come see what we have to offer!

Everything about the show was wonderful! Venue was lovely People were great Paul and jackie - just superior One improvement - let me have a bottle top on my water please!

That's all we have for Paul Heaton & Jacqui Abbott! Check out their upcoming shows