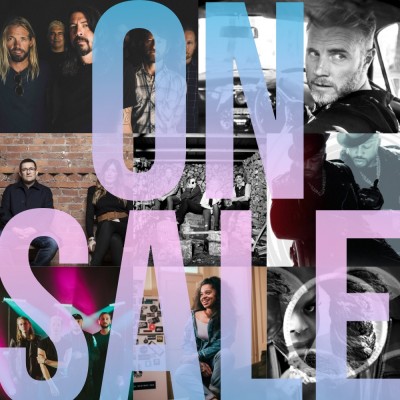 There are few bigger rock bands than the Foo Fighters. Led by Dave Grohl, Foo Fighters have grown from a solo project to packing out stadiums whenever they play. Their songs range from the emotive and touching to hard and heavy, never anything less than perfect.

Grohl and the gang have announced highly anticipated major UK shows. Playing Etihad Stadium in Manchester plus two nights at The London Stadium, you can expect to hear material from their latest album ‘Concrete And Gold’ plus classic tracks from their mighty back catalogue.

Foo Fighters tickets are available from 09:00 on Friday.

Get ready for his takeover of Hyde Park in London on Saturday 14th of July where he will be supported by many great names for a huge all-day festival.

Bruno Mars tickets are available from 09:00 on Friday.

You are hereby invited to explore Disney On Ice World Of Enchantment 2018 where you will see performances from such major motion picture stars as Lightening McQueen from Disney/Pixar’s Cars, The Little Mermaid’s Ariel plus Woody, Jessie, Buzz Lightyear and all the Toy Story gang – not forgetting Disney’s Frozen sister Anna and Elsa of course!

The show sweeps across the UK and heads to a stadium near you during May of 2018.

Disney On Ice tickets are available from 09:00 on Friday.

Let's Rock travels round the UK, uniting the very best stars from the 80’s for an unmissable festival where you are invited to come dressed as your favourite new wave pop star, glam metal rocker or new romantic.

Get yourselves down to Herrington County Park in Sunderland for the first ever Let's Rock the North East and look forward to a whole host of stars from the decadent decade. Early Bird tickets are just about to be released plus news of the line-up.

Let's Rock the North East tickets are available from 09:00 on Friday.

Gary Barlow rose to fame as member of ultimate 90’s boyband Take That to enjoy a career which has seen him sell 45 million records with the band and a further 5 million as a solo artist. He has also taken home an incredible six Ivor Novello Awards!

He now announces outdoor shows at High Lodge in Thetford Forest and Delamere Forest at Northwich for the Summer of 2018. Expected to sell fast, book yours before they are gone!

Gary Barlow tickets are available from 09:00 on Friday.

Following the massive success of their homecoming gig in Hull during the Summer of 2017, Paul Heaton once again teams up with Jacqui Abbott to head out on tour and perform hits from The Housemartins, The Beautiful South plus their recent Top 5 albums. Join them during June of 2018 for fantastic outdoor shows. Paul Heaton and Jacqui Abbott tickets are available from 09:00 on Friday.

Ever since the release of his 1995 debut album ‘Brown Sugar’ which sold two million copies, supreme neo soul, funk and R&B singer/songwriter D’Angelo has remained as the one to watch. He now announced his D’Tour which takes him to Eventim Apollo in London where he will be supported by Omar. D’Angelo tickets are available from 09:00 on Friday.

As you know, demand is always high and we expect these major shows to sell very quickly. Put yourself ahead of the rest by setting a personal reminder with Gigantic right now. We will alert you with a text message or an email as soon as your chosen event becomes available.

With something new arriving every day, we highly recommend you also check Gigantic frequently to see what new and thrilling events have come on sale. Take a look at all these great gigs coming your way this week:

Celebrating 50 years of amazing music, Jethro Tull have become world famous for blending the harder end of prog rock with blues and folk which has seen them sell a staggering 60 million albums. See them play all their hits when they tour round the UK throughout April of 2018.

Broken Witt Rebels draw their influence for the blues rock of the southern states. Having burst onto the scene with the release of their self-titled EP last year, the Birmingham based band are keen to impress on their extensive tour which sees them play throughout November and December.

Gigantic is famed for having a huge amount of essential gig tickets. Take a look at the many exciting events you can book right now: