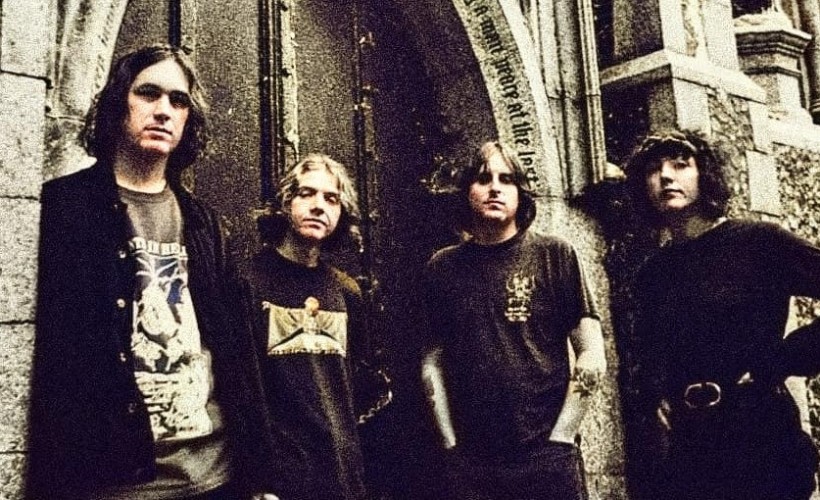 The Wytches plus guests Chalk, Brighton

The Wytches The Bodega, Nottingham

I liked the small nature of the venue with its wide stage which gave clear views of the bands. The sound was very good. I really enjoyed the music especially the local support band.

The Wytches have already have big plans for 2022. They hit the road once again in October!

The Wytches tickets are available through Gigantic right now. Everyone is after them so book yours before they are gone.


Bell and Honey had worked together previously in the band The Crooked Canes which split before the pair started university. Advertising on campus for a bassist, they were met by Rumsey who had previously fronted the bands Fall Victim and Dan Rumsey & The Bitter End. They began to forgo all else and throw everything into the band.

“When I was at university in Brighton I had to choose between giving a presentation or playing a gig we were offered. I chose the band and consequently got kicked out. It also ended a relationship. In the more exhausting on-tour moments you question these big life decisions, but then I remind myself that all I’ve wanted since the age of eleven was to play music. I was gigging in my first band at thirteen, and ultimately chose actual song writing over studying song writing. It’s still all I ever want to do.” - Kristian Bell

They began to get traction with the release of their debut single Beehive Queen, released through Hate Hate Hate Records, in 2013 followed by the cassette Thunder Lizard Revisited and the single Robe For Juda the same year.

The band signed to essential indie label Heavenly at the beginning of 2014. They recorded their debut album Annabel Dream Reader at Toe Rag Studios in Hackney, London, which was released in the Summer of 2015.

They followed this in 2016 with the release of their highly anticipated second album All Your Happy Life. The record draws on hugely varied spheres of influence, drawing on the magnificent literature of Tolstoy, the acoustic beauty of Elliot Smith and the irrepressible energy of underground metal bands.

As we our supplies of The Wytches gig tickets are always limited and everyone wants to see this amazing band we really do advise you to book early to avoid being disappointed. Gigantic is proud to offer a fantastic service in providing a huge range of essential gig tickets so stick with us to enjoy an unforgettable experience.

“This is the first thing that I've ever been proud of for longer than a week,” says The Wytches frontman Kristian Bell of the band’s latest album 3 Mile Ditch.

Whilst this is no doubt down to both his modesty and an overly sharp critical eye of his own work, it remains a significant and powerful statement nonetheless. “I'm so pleased with this record,” he beams. “I've been listening to it like it's somebody else's album.”

This sense of vigour and enthusiasm coming from Bell about the band’s third album is matched by its contents. The album is an explosive collection of 10 tracks that weaves seamlessly between gut-wobbling monster riffs, swampy rock, slick surf, and finely tuned songcraft. It’s also the result of a band coming back from the brink of collapse. “We've come back feeling re-energised and rejuvenated,” Bell says. “For a period I was losing interest. We were going through the motions but now things feel right again - the songs have a real sense of purpose.”

The band’s early trajectory was a steep and speedy one. Releasing two albums in two years via Heavenly and Partisan Records, they quickly established themselves as one of the country’s most exciting and pulverising new bands. Major festival slots stacked up at places such as Glastonbury, SXSW, Reading and Leeds, and British Summertime with the Strokes. As did the tours: a headline one in Russia, across the US with METZ, traversing Europe with Fat White Family and Death Grips. The radio sessions came in - for BBC, KEXP, NPR, Daytrotter - as swiftly as the knockout reviews: 10/10 from Artrocker, 9/10 Paste, 8/10 from DIY, MOJO, NME and more.

However, when the ascent to the stratosphere is moving at such a speed, there’s a risk of burning out and imploding, and the band came close to this. Especially after their drummer decided to leave and they were left questioning the future of the group. “When Gianni left we were all uncertain if we would continue,” Bell says. “We didn’t know where to start with finding a replacement and were disheartened by the whole thing. All the work that goes into getting a band off its feet and into the public felt like something we’d have to try all over again.”

The band were a little on the rocks for a while, unsure of themselves and if the band should - or even could - go on. “I had it in my head that this kind of thing only really happens once and to try it again might be a big waste of time,” Bell reflects. However, despite the difficulties, the powerful pull of the band was too great to ignore. “We had an album’s worth of songs that was some of our best material,” Bell says. “The mission became to complete a Wytches album rather than get The Wytches back on the touring circuit. This album helped us make the decision to try it again.”

Also, it turns out that the new streamlined approach benefited the new songs and helped shape a new path. “We found a direction with this album which I think came from simplifying things,” says Rumsey. Bell echoes this. “We wanted to make a straightforward rock album without going too weird with production and all the bells and whistles. To try and keep things minimal.”

Although once again Bell’s modesty is creeping in here. Whilst the album is bursting at the seams with hard rock screamers, with hooks and riffs so infectious they burrow deep into the brain, there’s also other more nuanced elements at play. Bell’s love of classic songwriting from Bob Dylan to Elliott Smith via Big Star’s Alex Chilton can be heard reverberating throughout the record; the result is a blend between his honed and subtle knack for songcraft and crunchy, eruptive bursts of noise.

For the recording, the pair couldn’t face introducing a new drummer and teaching them all the new songs. They simply pounced on their momentum and simply took on that role themselves, sharing drumming duties. Joining the two, and to help further ignite things, was a familiar face in Mark Breed. “It was the first time Mark was present for most of the recording sessions,” Bell says. “Mark was our original bassist before we moved to Brighton. He decided to stay in Peterborough to focus on his own work and a few years later re-joined us on guitar and keyboard. He added a lot of depth to the song arrangements. Also, I think when he saw things were starting to fall apart, he stepped in to help bring back the band dynamic we were missing.”

They recorded at Tile House Studios with Luke Oldfield and the process was the antithesis of how they had approached their last album, All Your Happy Life. “The second album was all written on the fly,” says Bell. “We didn't even demo anything. It was really refreshing to come into this record feeling really prepared.”

The band’s ferocious return also coincides with them starting their own label, Cable Code Records, to release it. This step further emphasising the exciting new position the band find themselves in after emerging from near disintegration. “Ultimately, we can put out whatever we want however we want,” says Rumsey.

For Bell, the band has never felt more vital or alive and that’s come with a degree of confidence and assuredness when looking to the future. “Early on a few negative comments would be enough for me to disassociate from my own work,” he says. “But you grow up and you mature. I never felt like I could stand behind what I was doing all that much but with this album I really can.”


Related to The Wytches

Make sure you see The Wytches in November!

Celebrate Halloween 2018 with The Wytches

The Wytches have previously performed at MIRRORS

On The Radar – Outlines Special

The Wytches To Play At Outlines 2017