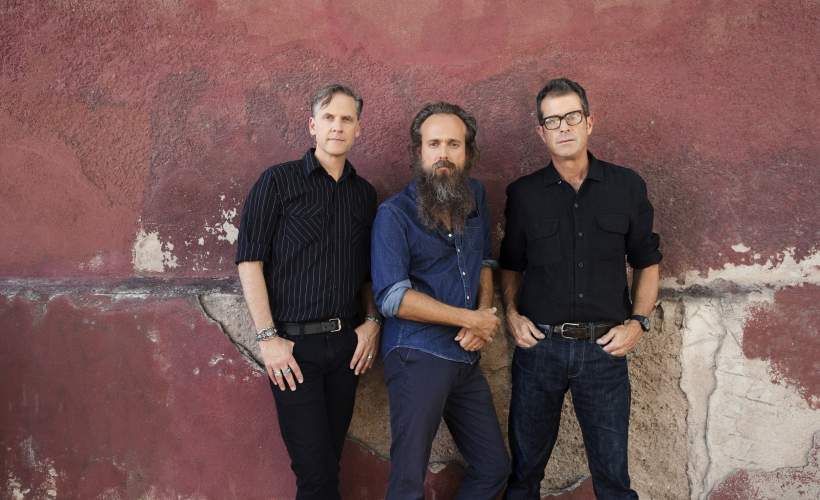 Tex-Mex indie rockers Calexico take a dark and enigmatic path, causing some to describe their sound as “Desert Noir”.

They have just announced that their ninth studio album titled ‘The Thread That Keeps Us’ will be dropped at the beginning of 2018. To promote the new material, they head to the UK to make a headline performance at O2 Shepherds Bush Empire in London on Thursday 29th of March where they will be supported by Mexican Institute Of Sound.

We at Gigantic are very excited to be able to offer you Calexico tickets, however we know that they will sell very quickly so we urge you to make sure you act fast and books yours before they are gone. Fortunately, Gigantic makes booking your gig tickets easy by giving you access to our site 24/7 through your computer, tablet or smartphone while you are on the go or while relaxing at home.

We also highly recommend that you set a personal reminder right now, and then we can alert you when they become available at 10:00 on Monday 16th of October with an email or a text message.


Calexico release their brand-new album ‘The Thread That Keeps Us’ early in 2018. The band describe their latest offering to be more chaotic than previous releases, which they ascribe to the current condition of the planet. They also tell fans to expect far greater experimentation on the upcoming album.

“Whenever we’re writing and we come up with something that feels too familiar, someone will end up saying, ‘That feels good, but let’s keep going and see what else we can uncover.’ It’s been really important to the arc of this band’s evolution for us to always keep on trying new things.” - Joey Burns

Excitement is building, so with only limited supplies of Calexico concert tickets on offer we really do urge you not to hang around and make your booking as soon as possible. Gigantic is famed for offering excellent customer service on a wide range of essential gig tickets meaning we are the right place to come whenever you are booking for your big night out!

Making a long awaited return to La Linea following their debut show at the festival in 2004, Calexico is no stranger to negotiating borders. For the better part of two decades, eight albums, and countless trips around the globe, Joey Burnsand John Convertino have crossed musical barriers with their band, embracing a multitude of diverse styles, variety in instrumentation, and well-cultivated signature sounds.

For their latest recording, Edge of the Sun, the band’s keyboardist, Sergio Mendoza (also known to La Linea audiences as the maker of the musical arrangements of Morrissey’s oeuvre which led to Mexrrissey), stepped up to co-write and arrange certain songs, ultimately co-producing the album along with Burns, Convertino, and longtime associate Craig Schumacher. Mendoza suggested that Calexico would physically cross an actual border for a retreat to the historic Mexico City borough of Coyoacán to begin the writing process for Edge of the Sun.

“I wanted to see the band revisit elements in the songwriting that led to songs from [the band’s 1998 breakthrough album]The Black Light, so I suggested going to Mexico City,” says Mendoza. “To me, it wasn’t going back to something they had already done, but rather adding another chapter with Mexican collaborators. The surroundings of Coyoacán really helped bring life to those ideas that were waiting for a special time and place to come out.”

Joey Burns, says, “Of course, we have been influenced by Mexican music and culture since the beginning, and you would imagine that a trip to Mexico City would have happened on past projects, but it hadn’t. So going to the center of Mexico and seeing an artistic community with such an impressive history as well as notable current musicians really inspired us.”

The ten days in Coyoacán were not without their surprises. Initially expecting for the world of Calexico to mesh with the sounds and vibe of Mexico City and take on varied overt Latin influences, Burns and Convertino were amazed when they left the country with some of their poppiest songs to date. Album opener “Falling from the Sky” is earnestly straightforward in its rafter-reaching approach, and “When the Angels Play,” with additional vocals and lyrics by Pieta Brown, connects thematically to the Aztecs but, in Burns’ words, could have been written anywhere.

Perspective achieved, the band internalized the influence of Mexico and continued to write and record in their home Wavelab studio in Tucson throughout the middle half of 2014. Songs such as the electronica “Cumbia de Donde” and the cinematic swell of “Coyoacán” were direct results of the foreign experience and the type of lessons that can only be realized upon reflection. While Convertino’s move to El Paso, Texas, presented another slight border to cross, all this distance only served to inspire and preserve the unique Calexico identity: unconventional timing and instrumental elements, an electrifying live show, and the pushing forward of social connection and ideas to create a profound space.