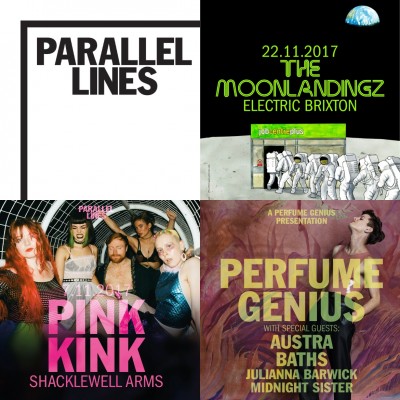 Seattle based indie pop songwriter Mike Hadreas AKA Perfume Genius makes his way to the grand Roundhouse in North London. There, he will be joined by Austra, Baths, Julianna Barwick and Midnight Sister which adds up to an incredible line-up.

With each band member originating from a different country, Pink Kink are a European melting pot which perhaps explains the chaotic nature of their music. Lunging from lofi electro to indie pop via post punk, Pink Kink are being hailed as the UK’s hottest unsigned act.

The Moonlandingz sees members of Fat White Family reaching out to their many friends to form a fictitious psychedelic art rock collective with a massive creative scope. Their released their surrealist debut studio album ‘Interplanetary Class Classics’ earlier in the year.

The Moonlandingz tickets are currently available.