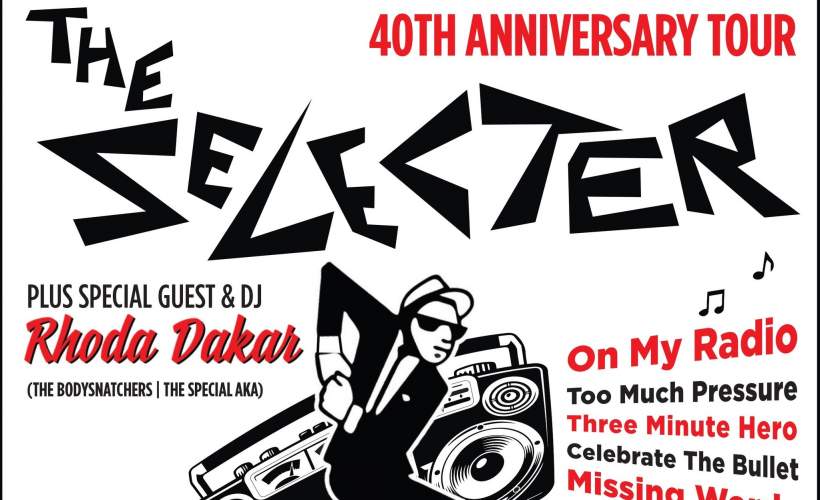 From the Jam + The Selecter Barrowland, Glasgow

From The Jam Plus The Selecter Exeter University Great Hall, Exeter

From The Jam + The Selecter O2 Academy Bristol, Bristol

Tweet
The Selecter have always been essential band since their inception in 1979 and continue to remain vital since recently reforming. Remaining challenging and compelling and performing high energy shows, The Selecter remain as important as ever.

Following the release of their latest critically acclaimed album Daylight, they have announced headline dates for the new year starting with Wedgewood Rooms at Portsmouth on Saturday 25th of May. They later play Concorde 2 at Brighton on Saturday 29th of June.

They have just announced an extensive tour for the new year. Catch them when they play at iconic Nottingham venue Rock City, The Roadmender at Northampton and O2 Institute Birmingham in October, and then Dreamland at Margate, The Engine Shed in Lincoln and De La Warr Pavillion at Bexhill during November 2019.

You need to get your hands on The Selecter tickets before they all get taken. Did you know gig ticket orders can be placed with Gigantic using your tablet, computer or smartphone 24/7 either home or away?


When classic bands reform they are typically marketed as a heritage act with lesser bands opting into the easy money to be made through nostalgia. Not so with The Selecter who have continued to grow artistically and excel in their live performance. In recent years they have re-established themselves as a major festival act, played three headline tours and released the album Daylight to critical acclaim.
Led by iconic singer Pauline Black, who has also enjoyed success with her recent shows on BBC 6 Music and the release of her book Black By Design, the band continues to drive audiences wild with their high energy show fuelled by anarchic passion. With confidence at sky high levels, their upcoming shows are bound to be absolutely amazing.

The Selecter concert tickets are always massively popular so expect them to sell out quickly. We advise to book early or risk missing out. Gigantic always have a huge array of must have gig tickets so stick with us for the very best experience.

Legendary 2-Tone artists, The Selecter, released their new studio album SUBCULTURE to critical acclaim in June this year on DMF Records and have just announced part two of their Subculture tour with dates around the UK in Spring 2016.

Whenever successful bands from the past reform they invariably start trading in nostalgia and become “heritage” acts. No one expects them to grow artistically or continue to excel at the same things that brought them popularity in the first place, but that’s what The Selecter have done in the past few years. They’ve played at major festivals, headlined 3 UK tours and recorded three studio albums, the latest of which, Subculture, is mixed by UK dub-master Prince Fatty.

The Selecter is led by their iconic frontwoman Pauline Black, whose recent series of shows on BBC 6Music were hugely well received, and whose book ‘Black By Design’ continues to sell in droves worldwide, alongside an incredible talented band of musicians, including Neil Pyzer (Spear Of Destiny) Will Crewdson (Rachel Stamp) and co-fronted by original member Arthur ‘Gaps’ Hendrickson (who features extensively on Subculture).

The anarchic passion that fuelled Selecter gigs during the 2 Tone era, when they toured with the Specials and Madness at the peak of their early fame is still there, except the pair (Pauline & Gaps) seem more driven than ever. Their confidence is sky-high and they’re also writing the best songs of their career, which is saying something given the enduring popularity of hits like Three Minute Hero, Missing Words and On My Radio.

Related to The Selecter

Interview With Pauline Black Of The Selecter About Playing Outlines

The Selecter To Play At Let's Rock!