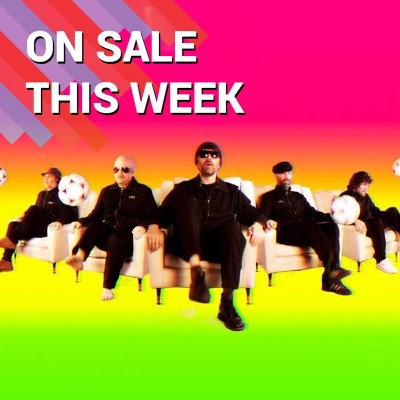 The countdown has begun for the biggest dance festival in the South-West. Lockdown will have ravers dancing to a full weekend of the biggest names in Drum and Bass, electro and grime.

Can you get any bigger than the likes of Shy FX, Tinie Tempah, Rudimental and Katy B? The weekend is fast approaching so get your ticket now!

Psychedelic, eccentric and totally electrifying, The Flaming Lips are the ultimate rock and roll band. Their oddball rock and roll is always endearing and their artistic flair makes for unforgettable live shows.

With little known about their upcoming album, you could be amongst the very first to hear their new material if you join them on their January tour.

Now that the schools are out we have the perfect weekend to keep all your little people entertained. Gloworm has plenty of rides, activated and workshops to excite the children who will be delighted by guest appearances from the likes of Dick & Dom plus Mr Bloom.

There will also be great music from the likes of Toploader, Seas Of Mirth and more!

Master of the blues Joe Bonamassa has recently released his twelves studio album Blues Of Desperation which went straight in at #3 in the UK Charts.

“Joe Bonamassa is one of the most technically proficient guitarists in the world. This has characterised all his releases – note perfect blues-rock, not a thing out of place.” – Rolling Stone Australia

Bonamassa showed signs of greatness when he played support for the legendary BB King whist only twelve years old. Now he plays two electrifying nights at the auspicious Royal Albert Hall in London during April of next year.

We are really excited to find out that our favourite Welsh psychedelic indie band Super Furry Animals have just announced a tour of the UK on which they will be playing their first two incredible albums; Fuzzy Logic and Radiator in their entirety.

Essential dance act The Orb have been pioneers of ambient house since they founded in 1988. They are celebrating quarter of a century since the release of their seminal debut album Adventures Beyond The Ultraworld with live dates. Get your tickets before they are gone.

Modern soul star Nao recently smashed the Top 20 with her new album For All We Know. Catch her when she tours later in the year. Plus, New Jersey hip hop producer Clams Casino will be demonstrating his skills at various upcoming dates.

Californian deathcore band Suicide Silence cannot wait for their upcoming tour, stating; “Hold on to your butts cause we will be headbanging our way through your town!”. Hard rock fans also need to pay attention to the rise of Blood Youth. They are about to launch their first headline tour to promote the new EP Closure.

Perfect post punks The Wytches are poised to put out their second record All Your Happy Life to be promoted with provoking performances and The Joy Formidable will be playing for your pleasure.

Also, mod revivalists Ocean Colour Scene are celebrating twenty years of their breakthrough album Mosely Shoals with a tour and singer/songwriter Lissie is presenting material from her new album My Wild West around the UK.

Sikth, InMe, Black Peaks, The Qemists and Stop, Stop all will be playing at the magnificent Macmillan Fest this year. The hard rock day festival takes place at various of Nottingham’s fine venues before relocating to Bristol Tekla the following week.

Macmillan Fest is also a force for good, having raised more than £20,000 for the Macmillan Cancer Charity since it first began thrilling audiences several years ago. Please give generously whilst enjoying the many mind blowing bands playing the two dates.

Located in the truly unique acoustic spaces of Newhaven Fort in East Sussex, Fort Process offers an evocative experience by bringing together a myriad of the world’s foremost musicians, poets and artists. Fort Process will also be screening compelling films.

Festival goers are invited to attend the many compelling speaker events being held over the course of the day, as well as taking part in the fantastic workshops where you can develop your own skills.

OnBlackheath has something for everyone; amazing activities for children including Puffin Books World Of Stories, fantastic food such as the Chef’s Banquet produced by the internationally renowned Theo Randall and marvellous music from the likes of Primal Scream, James, Hot Chip, Belle & Sebastian plus more.

The South London festival offers a welcoming environment and a wonderful experience in an easily accessible setting.

The Damned have been instrumental to the development of punk and hardcore having played their very first gig as support for Sex Pistols in 1976. The gothic rockers are marking their 40th Anniversary with an extensive tour.

Primal Scream’s latest album Chaosmosis has all the makings of a modern classic and can boast featuring dancepop sensation Sky Ferreira on the single Where The Light Gets In. They take over Time Square in Newcastle for a truly exciting evening.

We have some great tickets for the alternative audience. The Wave Pictures are keen to show off the new songs on their A Season In Hull record, nu-disco wonder Bright Light Bright Light has just released a track which includes Elton John’s original vocals and Anathema are back on tour.