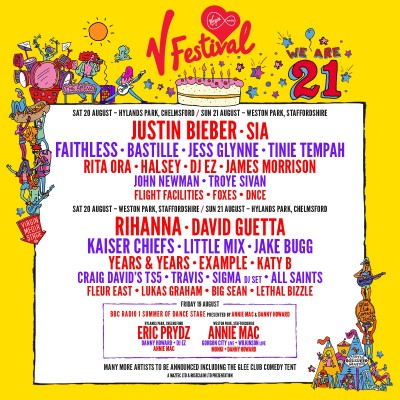 V Festival is celebrating 21 spectacular years of being at the forefront of UK festivals. To mark their coming of age, the organisers have managed to secure the absolute biggest names ever - Prince of Pop Justin Bieber and Megastar Rihanna.

Other amazing acts that make up the superb array of celebrity pop and rock names include Bastille, Little Mix, Jess Glynne, Jake Bugg, Years & Years plus many more!

The exciting festival simultaneously takes place in Hylands Park at Chelmsford and Weston Park in Staffordshire on Saturday 20th until Sunday 21st of August.

The festival promises to be a real treat and absolutely unmissable. Check below for some of the many other humungous stars all performing for you!

Let’s face it; there is no-one bigger than Justin Bieber. When he isn’t topping the charts all over the world with hits like Sorry, Boyfriend and Love Yourself he is appearing in blockbuster movies and modelling for Calvin Klein.

Nowadays he seems to have gone bad and it feels so long ago that he was like baby, baby, baby. But for one night at V Festival he will always be yours.

Can you get any better than RiRi? Platinum selling albums, Grammy Awards and a decade of essential singles including S&M, Take A Bow, We Found Love and Diamonds.

We are set for more scorching days this August. But don’t worry if it rains because you can stand under her umbrella.

Australian alt pop sensation Sia may leave some scratching their heads after watching her videos. But everyone agrees that her powerful music is truly inspiring.

Her incredibly voice works so well over pop enthused drum and bass to create such outstanding tracks as Cheap Thrills, Chandelier and Taken For Granted.

When anyone says Superstar DJ the first name that comes to mind is David Guetta. The French record producer has sold over nine million albums and collaborated with just about everyone worth mentioning.

His hit singles Memories, Titanium and When The Love Takes Over are the sound of the summer.

Faithless have been bringing the party bangers since 1995. The dance veterans Sister Bliss, Maxi Jazz and Rollo have shaped the course of dance and pop music with such massive hits as Insomnia, God Is  A DJ and We Come 1.

So throw your hands in the air like you just don’t care because this is going to be big!

Everyone loves Kaiser Chiefs. The cheeky chappies from Leeds hit singles Ruby, Oh My God and Everyday I Love You Less And Less are literally the best ever festival songs.

Get yourself to the front because we know one thing for sure – it is going to be a riot!