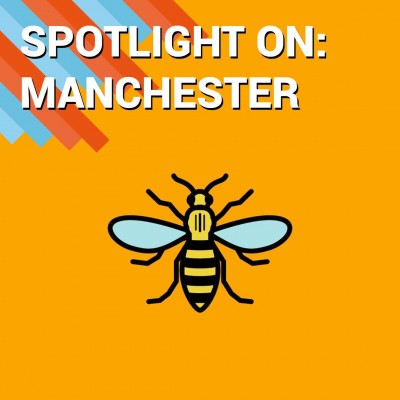 Manchester. The city of industry, canals and football has a well-earned reputation for being the origin of fantastic music. Having already been known for their rowdy Victorian music halls in the past, the city was also quick to respond to with its own version of punk following the Sex Pistols playing at the Lesser Free Trade Hall on 4th June, 1976. This northern re-interpretation was less stylised than the London Teddy Boy bands of London in their designer suits taking a harder edge as typified by Slaughter & The Dogs and Buzzcocks who played support.

Also in attendance of the infamous Sex Pistols gig were the vanguards of the new musical movement of post punk. The soon-to-be members of Joy Division, Mark E. Smith of The Fall and visionary producer Martin Hannett would harness the energy of punk but shed the nihilism in favour of sonic experimentation and modernist aesthetic design that would produce a sharp futuristic sound that would come to define the genre and inform the upcoming dance music revolution.

Spearheaded by New Order who changed their name and direction following the loss of their singer and lyricist Ian Curtis, Manchester began to discover the use of samplers and synthesizers and give rise to dance music. Propagated by self-appointed spokesman Tony Wilson through his essential Factory Records label, dance music would find a home in his nightclub The Haçienda which would develop and diversify into acid house and rave.

As the Nineties approached, the city gave birth to a sound with which the name of the city has become synonymous. Fusing the indie guitars pioneered by other local legends The Smiths with the recent progress created by dance music, bands like The Stone Roses and Happy Mondays created the psychedelic baggy “Manchester Sound”. This created the musical landscape that led to the rise of mainstream indie groups such as The Charlatans and Oasis.

Today Manchester still reigns as a cultural epicentre for the entire world being a leader in art, design and can boast of such important music venues as Gorilla, Soup Kitchen, Albert Hall and The Deaf Institute. The city also plays host for a fine array of upcoming gigs.

The influence of Miracle Legion cannot be underestimated. The college rock band were direct influences upon such mighty names as R.E.M. and Radiohead. The New Haven band have returned from retirement to play at The Deaf Institute on Thursday 18th of August.

Join him when plays at The Deaf Institute on Monday 22nd of August.

See him headline The Deaf Institute on Thursday 25th of August.

Their must see gig takes place at The Castle Hotel on Thursday 3rd of November.

Much like Manchester, Chicago is a major industrial city with a rich musical traditional that is predominantly steeped in blues. Ryley Walker found a home in the Chicago independent music scene where his blues rock came to the fore.

Be sure to get down to Ruby Lounge on Monday 14th of November to see him play.

Jay McAllister AKA Beans On Toast is a familiar face on the festival scene. His off the cuff storytelling style has resonated with listening audiences the world over and earned him a well-deserved reputation of an antifolk hero.

Tickets are available for his show at Gorilla on Saturday 26th of November.