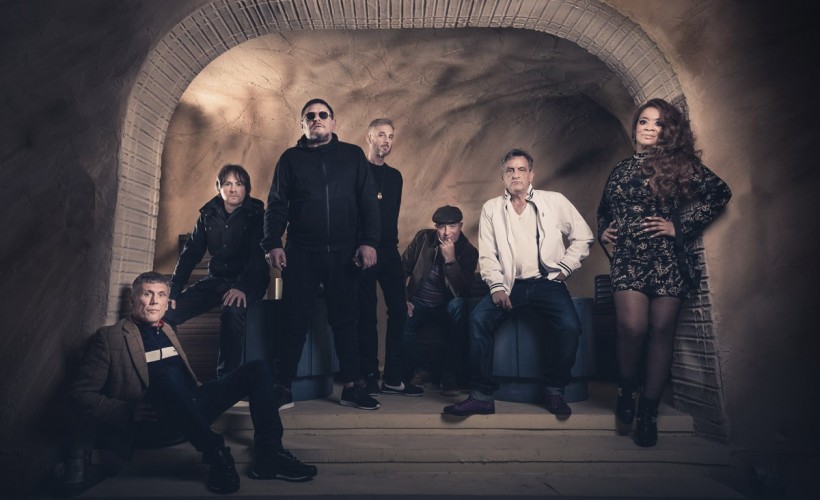 Took me back they were amazing !! Bez was great dancing xx

I've never been to Rock City before, and oh my, what a treat.. Happy Mondays were on top form, and at such a small venue, the sound is incredible. Fantastic night...

They still have it. Loved every minute of the performance......

"One of the best"


Anyone of a ‘certain age’ in the late 1980s and early ‘90s will remember just how much of an influence on the dance and Indie music culture the Happy Mondays really were. Iconic Mancunian musicians that paved the way for bands like Oasis and Blur to move to the forefront of ‘Cool Britannia’ later on, Shaun and Paul Ryder, accompanied by the permanently happy Bez, set the tone for an explosion of unique pop music that summed up an entire era.

Today the Mondays are still together, still bringing to adoring audiences a selection of brash vocals, sublimely complicated tunes underpinned by riffs that just won’t quit, and an image that remains as true to the band’s spirit of independence now as it did 30 years ago. Happy Mondays tour dates are bound to sell out quickly as a generation of 40/50-somethings remember those glo-stick waving raves and halcyon Hacienda days once again. So if you’re one of those 40/50-somethings or a member of a new generation of Mondays fans, check out the Happy Mondays concert tickets available at Gigantic.

The word is spreading and the demand is rising so make sure you act fast and book your Orbital tickets before they are all snatched up. Making your gig tickets booking is made easy as you can access Gigantic 24/7 at home or on the go using a tablet, computer or smartphone.

We make your booking even easier if you set a personal reminder with Gigantic. It means we can send you a link via text message or email directing to where you can make your purchase just prior to their release at 10:00 on Friday the 10th of December.


The Mondays will, of course, be twisting that melon as hard as ever (and to this day nobody’s actually worked out what Bez’s role in the band is…). And you can guarantee that there will be plenty of smiley face tee-shirts, bandannas and whistles as hundreds of Mondays fans relive those heady days of midnight dashes through the countryside to all-night raves in the middle of nowhere.

But don’t simply assume that the Mondays are a relic of the 1990s rave culture, they’re as relevant today as they’ve always been, and their unique sound is finding a new legion of fans in the 20-Teens. Happy Mondays tickets will move quickly, so make sure you grab yours from Gigantic now.

Along with the Stone Roses, Happy Mondays were the leaders of the late-'80s/early-'90s dance club-influenced Manchester scene, experiencing a brief moment in the spotlight before collapsing in 1992. While the Stone Roses were based in '60s pop, adding only a slight hint of dance music, Happy Mondays immersed themselves in the club and rave culture, eventually becoming the most recognizable band of that drug-fueled scene. The Mondays' music relied heavily on the sound and rhythm of house music, spiked with '70s soul licks and swirling '60s psychedelia. It was bright, colorful music that had fractured melodies that never quite gelled into cohesive songs.

Unwittingly or not, Happy Mondays personified the ugly side of rave culture. They were thugs, purely and simply -- they brought out the latent violence that lay beneath the surface of any drug culture, even one as seemingly beatific as England's late-'80s/early-'90s rave scene. Under the leadership of vocalist Shaun Ryder, the group sounded and acted like thugs, especially in comparison with their peace-loving peers, the Stone Roses. Ryder's lyrics were twisted and surrealistic, loaded with bizarre pop culture references, drug slang, and menacing sexuality. Appropriately, their music was as convoluted. Happy Mondays were one of the first rock bands to integrate hip-hop techniques into their music. They didn't sample, but they borrowed melodies and lyrics and, in the process, committed rock blasphemy. For a band that celebrated their vulgarity and excessiveness, Happy Mondays appropriately were undone by their addictions, but they left behind a surprisingly influential legacy, apparent in everyone from dance bands like the Chemical Brothers to rock & rollers like Oasis.

Bummed
With their second album, 1988's Bummed, Happy Mondays became British superstars, particularly Ryder. Pills 'n' Thrills and Bellyaches, released in 1990, marked the height of the band's popularity, creativity, and influence; although the record made the Top 100 albums chart in America, it didn't establish them as stars in the U.S. After that, the fall was quick. By the time they released their next studio album, Yes, Please, Manchester had disappeared from public consciousness; it sold respectably, but the group didn't have the commercial impact that they had just two years before. Besides the lack of public interest, Shaun Ryder had become addicted to heroin, tearing the band apart in the process. At a high-level record contract meeting, Ryder walked out for some "Kentucky Fried Chicken," which was the band's slang for heroin. He never returned and the group quickly fell apart.

It's Great When You're Straight... Yeah
Ryder and the Mondays' full-time dancer, Bez, re-emerged in the mid-'90s with Black Grape. The band released its critically acclaimed debut, It's Great When You're Straight...Yeah, late in the summer of 1995. Black Grape's sound pursued the same direction as the Mondays, only with a harder, grittier edge to their sound and lyrics. In 2007, 15 years since their last record, the band (minus about half the original members, including guitarist Mark Day) released their fifth studio album, Uncle Dysfunktional.

Get your Happy Mondays tickets with Gigantic.

Gigantic has tickets for Happy Mondays

Gigantic has the best tickets for Happy Mondays