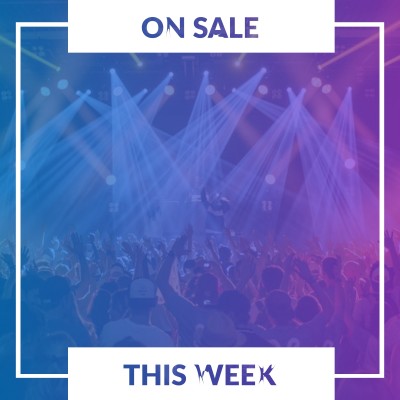 Folk singer George Ezra has been electrifying audiences even prior to the release of his critically acclaimed debut album ‘Wanted On Voyage’ which became one of the best-selling UK albums when released in 2014.

Now, with a follow up album waiting in the wings, Ezra invites you to attend two extraordinary outdoor shows taking place at Westonbirt Arboretum in Gloucestershire and Cannock Chase Forest in Staffordshire this summer.

George Ezra tickets are released at 09:00 on Friday.

The first major musical event for 2018 is the release of The Breeder’s new album ‘All Nerve’. Reuniting the original 1993 line up, the brand new material plus their classic alt rock hits will be played at a handful of shows later in the year.

The Breeders tickets are released at 09:00 on Friday.

Family entertainment doesn’t come any better than Disney On Ice World Of Enchantment 2018. The non-stop fun includes appearances from all your favourite characters including Lightning McQueen from Disney/Pixar’s Cars, Ariel from The Little Mermaid and Disney’s Frozen sisters; Anna and Elsa.

Combining classical music with a pop feel, Katherine Jenkins has proved to be a huge success performing to huge crowds around the world. She now unites with the National Symphony Orchestra for a spectacular show at Sennowe Park in Norfolk.

Madchester’s finest band Happy Mondays spearheaded the baggy revolution and paved the way for the acid house inspired indie that would breakthrough into the mainstream and flavour the sound of both the 80’s and 90’s. They have just announced a very special show at Zebedee’s Yard in Hull. Happy Mondays tickets are released at 10:00 on Friday.

This year sees the release of Car Seat Headrest’s new album ‘Twin Fantasy’. They promote the exciting new material with a handful of UK shows being held in May 2018. Car Seat Headrest are released at 10:00 on Friday.

We always highly recommend that you set a personal reminder with Gigantic so that we can alert you with a text message or email just prior to the release of your favourite show.

There are always thrilling new events been added to Gigantic, so it makes sense to check the site to see what has been newly added. Take a look at all these events which become available this week:

A huge fan favourite, Rock and Bike Festival excites the whole of Derbyshire and beyond with many attending each year to enjoy the bike show, tattoo competitions and hard hitting music.

Hoosiers, Cast, Eyre Llew plus many more form the fantastic line up for Blokout Festival held at Locko Park in Derby.

Stone Free Festival 2018 is the right place for hard rock fans, putting on headliners Scorpions supported by Megadeth and Yes at The O2 Arena in London.

Wrexham plays host to Rock The Park; a two day festival celebrating the biggest names in rock and pop with the very best tribute acts.

Guitar great Joe Bonamassa showed early promise whilst performing with the legendary B.B. King aged only 12. He has subsequently grown to become one of the world’s best living blues players, inspiring many with each gig and awesome album. He hits the road and plays across the UK in March.

One of the biggest progressive rock bands of all time; Jethro Tull can boast an impressive back catalogue which spans genres – including blues, folk and heavy rock. Join them as they embark on an extensive tour throughout April.

And finally, 2018 promises to be a truly great year with all these excellent events already on sale and waiting for you to enjoy: