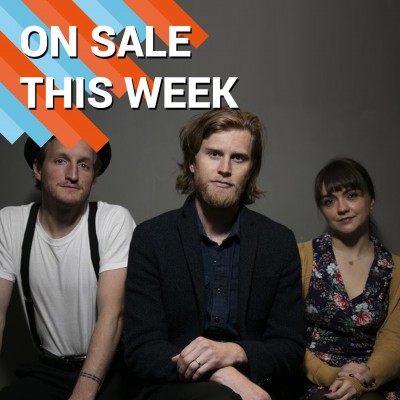 After wowing vast crowds at the infamous Glastonbury Festival this summer, Jeff Lynne’s Electric Light Orchestra return to Wembley Stadium for one night only as part of their electrifying Alone In The Universe tour.

The prog-pop band have sold over 50 million records and have made their indelible mark upon all contemporary music from rock to dance. Their out-of-this-world back catalogue includes such wonderful hits as Hold On Tight, Don’t Bring Me Down, Livin’ Thing and their #1 disco track for the film Xanadu.

Folk rock fans will be absolutely thrilled with the news that The Lumineers will be touring in Autumn. The tour will heavily feature material from their brand new album Cleopatra which shot straight to #1 in the UK Album Chart.

The Denver band previously enjoyed mammoth success with their self-titled debut album which has subsequently been certified Platinum in the States and been declared Gold in the UK, Australia and Canada – with their latest release set to do even better.

French electronic musician Anthony Gonzalez is the exceptional musician behind the super synthpop band M83. Since the release of their eponymously titled debut album in 2001 they have won the well earned respect of fans and critics around the world.

With the recent release of their new record Junk, M83 return to the UK to play O2 Academy Brixton at what will be an unmissable gig. Absolutely essential evening for anyone who enjoys upbeat electro with a euphoric dreamy dimension.

Afropunk arrives in the UK for its first major event in the counterculture movement’s history. The celebration of Black Culture includes a number of fantastic performances from such great musicians as Grace Jones, Benjamin Brooker, Kwabs, The Noisettes and many more.

The festival fosters a spirit of energy and seeks to empower all who attend with a sense of independence through the various incredible and inspiring artistic endeavours on display which celebrate diversity and equality amongst all people.

Big time grime MC Kano has just released his first studio album in six years; Made In The Manor. The record gathered together a huge array of truly great guest appearances from the likes of Giggs, Jme, Wiley and Damon Albarn and features massive tracks like Endz, 3 Wheel-ups and This Is England.

Made In The Manor marks more than just another release as part of the recent resurgence in grime. Kane Robinson’s new album allows him to voice the legacy of the frequently misunderstood and oft maligned genre resulting in not only his best record to date but appointing him as the true champion of British urban music.

Master of nu jazz Ludovic Navarre is more commonly known to his fans as St Germain. Fusing laid back house beats with amazing jazz arrangements, he made his name in the nineties growing from cult icon to international sensation after his 1995 debut album Boulevard sold over 1 million copies worldwide. In 2000 the French multi-instrumentalist released his breath taking album Tourist which has now exceeded sales of 3 million.

This year the EFG London Jazz Festival invites you to watch the living legend perform at Royal Festival Hall in London.

On sale soon we have a huge plethora of amazing international artists including the outstanding Irish five-piece band Walking On Cars, Catalan rhumba greats The Gipsy Kings and American singer-songwriter Lissie.

Plenty of you out there love to rock and so you will be pleased to hear hardcore band AGAINST ME! will return to the UK to promote their new album Shape Shift With Me plus make sure you check out scuzzy art mess of Brighton band Tigercub.

For those with a taste for talented songwriters we have South London’s finest Jamie T playing material from new album Trick, Long Beach acoustic punks This Wild Life and also superb country duo The Shires.

Organisers of Truck Festival have just released their early bird tickets following the wild weekend at Hill Farm that still has ecstatic fans of such great acts as Catfish & The Bottlemen, Manic Street Preachers, The Big Moon, Estrons and more reeling with excitement. Get them at the cheaper price before they are gone!

No-one defines the wild excesses of Madchester like baggy champions Happy Mondays. See them take over Derby Arena where they will be support by indie pop champions The Bluetones.

There are some great alternative dance acts on sale including the shimmering melancholic beauty of The Japanese House touring in October and original ambient techno DJs The Orb celebrate 25 years of their highly influential debut album Adventures Beyond The Ultraworld.

It’s a great time for fans of indie rock as both The Jesus and Mary Chain and Echo & The Bunnymen are currently selling tickets for their separate tours around the UK later in the year.