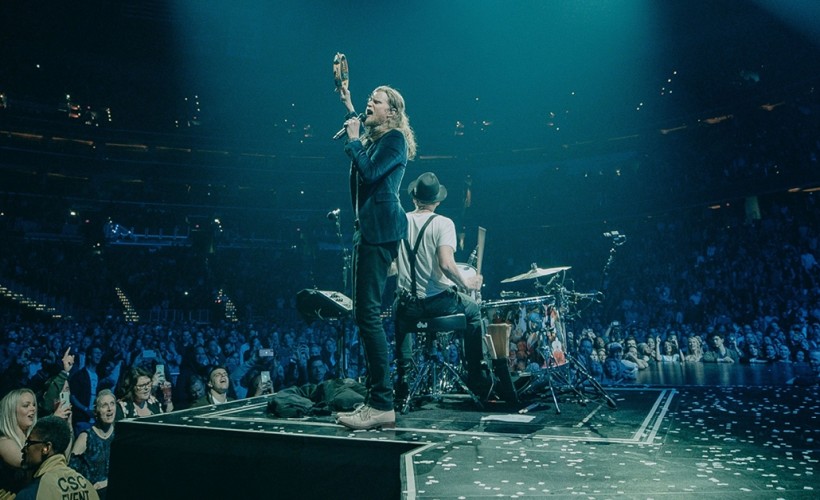 I loved the concert, The Lumineers were amazing, their performance was outstanding and generally, the mood of the concert was intoxicating and magical, truly an unforgettable evening.


As Jeremiah Fraites holds a euphoric beat, and Wesley Schultz’s rich timbre fills a dark arena, the band are joined by a chorus of voices from thousands of carefree fans. The verve in the room is palpable, no one could predict that night, the epic impact the pandemic would wreak upon the world for the next year and some. The very next day the world paused and doors were closed as everyone retreated inside.

The tracklisting for the EP includes favourites Ophelia, My Cell, Donna and Gloria, along with the now unfamiliar, but heart-warming sounds of crowd appreciation and an audience joining in to sing. The vocals are mid-show raw, both poignant and joyous, the music up-tempo, yet pure low slung blues. A magical hybrid of Americana folk pop, created with accomplished composition and musical grit.

Live From The Last Night Of The Tour is a perfect appetizer, before the band reset and fire up the juggernaut of buses, rigs & ticket sellers, to take the 2022 tour on the road throughout February & March. Almost two years after lockdown Wesley, Jeremiah and thousands of fans around the world will emerge, blinking into the spotlights for what is going to be one monumental reunion.

The Lumineers are at the forefront of indie folk and need to be seen. To see them live is to see the band, led by front man Wesley Schultz, at its very best. So far, the demand for tickets in the UK has been astonishing.

The band’s numerous performances and nominations cement what has been a phenomenal year for the Denver five-piece who have sold over 2 million copies of their debut self-titled album globally and over 4.5 million single copies of their debut single ‘Ho Hey’ in the US alone. In the UK, the album has hit the 300,000 mark, reaching an official chart high at #8, while ‘Ho Hey’ is also certified Platinum. Both the album and single have been fluctuating in the UK iTunes top 10 since release last year with sales increasing week on week.

Excitement is quickly building and many people are looking to get their hands on The Lumineers tickets. With demand so high, we recommend you book early or risk missing out. Fortunately, placing your gig ticket order is made easy as you can access Gigantic 24/7 using your computer, smartphone or tablet whilst relaxing at home or busy on the move.

This year will see the release of their third album, appropriately titled III. It will, no doubt, be one of the biggest records of the year!

The new album is a cinematic narrative told in three chapters, with the songs from each chapter focusing on one primary character in the fictious Spark’s family. “Gloria”, the first single from III, is about love between an addict and her family.

Wesley Schultz says the album “was inspired by a member of my family, and no amount love or resources could save her. She’s now been homeless for over a year. Loving an addict is like standing among the crashing waves, trying to bend the will of the sea.”

Jeremiah Fraites says, “This collection of songs worked out in a beautiful way, and I feel with this album we’ve really hit our stride.”

The band has sold out tours across the world, with over 300,000 tickets sold on 2017’s Cleopatra World Tour and ended with 27 sold out arena shows.
The Lumineers have also supported icons and their musical heroes on the road, including Tom Petty and the Heartbreakers on his final tour and U2 on its Joshua Tree tour.

There are limited supplies of The Lumineers concert tickets being made available so you will have to act fast and book yours before they are all gone. Having provided excellent customer service with every order, you know Gigantic is the right place to book your essential gig tickets whenever you are planning your big night out.


Related to The Lumineers

The Lumineers tickets on sale with Gigantic!

Grab tickets for The Lumineers with Gigantic!

Gigantic has your tickets for The Lumineers