M83 is the brainchild of French electronic musician Anthony Gonzalez. Based in Los Angeles, the band incorporate shoegaze and synthpop styles with a heavy use of reverb. They have released seven studio albums, including their latest named Junk.

Anthony Gerard Gonzalez began playing guitar as a teenager growing up at Antibes in France. As his interests and talent developed, he acquired a synth and began to record demos. The expansion into the use of synthesizers caused an explosion in creativity and he created the band named after a galaxy found 15 million light years away in the constellation Hydra.

In 2001 they released the eponymously titled debut album M83 whilst Gonzalez was still in college to little fanfare. However, the breakthrough came with the release of second album Dead Cities, Red Seas & Lost Ghosts in 2003 which received great critical acclaim as did 2005 release Before The Dawn Heals Us.

They released the ambient album Digital Shades Vol.1 in 2007 and the massively successful album Saturdays = Youth in 2008. The latter hugely raised the profile of Gonzalez when it hit #1 in the UK Top Heatseekers Chart.

Their success continued with the 2011 release Hurry Up, We’re Dreaming which smashed into #44 in the UK Album Charts.

Their latest release is the record Junk. Released in April of 2016, it hit #28 in the UK Album Charts and will feature heavily in their upcoming live UK date.

M83 tickets can be yours through Gigantic when they go on sale at 09:00 on Friday 22nd of July. Be sure to set a personal reminder so you are ready for their release.

The amazing electronic band will be performing at legendary South London venue O2 Academy Brixton on Wednesday 23rd of November.

Gig tickets are always in limited supply so be sure to book yours with Gigantic early to avoid disappointment. 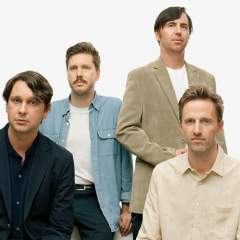 That's all we have for M83! Check out their upcoming shows