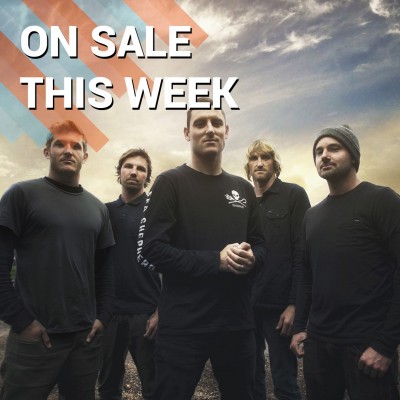 The Dillinger Escape Plan have announced their plans to enter an indefinite hiatus following the release of their new album Dissociation          and the completion of the accompanying tour. Released in October, the upcoming album is expected to mark a creative high for the superb mathcore band.

The news of their impending break comes as a shock to their legions of loyal fans and we expect their tickets to sell fast. Get your ticket before they, and the band, are gone!

Click HERE for your The Dillinger Escape Plan tickets.

Experimental rock band Cage The Elephant draw on little elements everywhere, from punk to blues, to create a whole load of fun. Adored by their fans and the critics alike, it comes as no surprise they received a Grammy nomination in Best Alternative Music Album for the record Melophobia.

Last year saw the release of their massive selling album Tell Me I’m Pretty and in January the Kentucky boys return to the UK to totally rock O2 Academy Brixton.

This is your last chance to get your tickets for Lockdown Festival. The absolutely banging weekend plays host to some of the biggest names in dance music and you can expect to rave to the likes of Shy FX, Tinie Tempah, Chase And Status plus Rudimental.

Offering everything from drum and bass techno, grime and beyond. Get your ticket and get involved!

Inspired by the Academy Award®-winning motion picture, be prepared to be whisked away to a wintery wonderland when Disney On Ice presents Frozen. Joining you will be all your favourite Arendelle characters including loving sisters Anna and Elsa, plus the hilarious snow people Olaf, Kristoff and Sven.

Touring the length of the land, Disney On Ice presents Frozen will be hosted by Micky and Minnie and will include other of you cherished Disney friends.

Stick it up punks; it’s the Fun Lovin’ Criminals! Having enjoyed celebrating the 20th anniversary of their 1996 debut album Come Find Yourself they are about to launch tickets for the Spring 2017 tour. Armed with some killer riffs, a whole load of Tarantino samples and being just so damn cool, original G Huey Morgan and co. are ready to blow you away.

Just announced! Parkway Drive will be making their way to Europe for their Unbreakable tour in April of next year. The news will excite the legions of fans for the Australian metalcore band who will be joined by homegrown talent Asking Alexandria. But if you need your guitar fix a bit sooner pop punks Jimmy Eat World will be hitting the UK in November as will hardrock bands Yashin and Boy Kill Boy.

Commenting on the many incarnations of post punk band The Fall, singer and the one remaining founding member Mark E. Smith once famously said “If it's me and yer granny on bongos, it's The Fall”. Whilst we can’t promise that your granny has secured her place as percussionist in the band we are looking forward to seeing Smith bring some sort of motley crew on stage in January. Keeping with the alternative theme, we are also about to release tickets for the stupendous Kate Nash, LA afropop group Local Natives and rising Leeds legends Clay.

Blending folk with hip hop to create a sound she describes as A-Flop, Lucy Spraggan has released three temedous records including Top Room At The Zoo, Join The Club and We Are. Join her when she tours in March. We also have tickets for trap DJ Baauer.

And we also are about to release tickets for X Factor winner Ben Haenow for spring of next year. That is certainly something you need.

Taking place across three days in thirty of the best venues vibrant Brighton has to offer, The Great Escape festival offers over 300 amazing acts from right across the world such as Loyle Carner, Desert Mountain Tribe, Warhaus, Eyre Llew and Vulgarians.

They have now released super early bird tickets in limited amounts. Get them before they are gone!

Allen Valleys Folk Festival holds pride of place as one of the final festivals of the year. Saving the best till last, the wonderful folk festival takes place in the idyllic Northumberland countryside from Friday 30th of September until Sunday 2nd of October.

Revellers will be treated to the likes of punk inspired Stick In The Wheel, Uist heroes Eabhal and the irrepressible Superfolkus.

Sadly, New York indie trio Augustines have announced their Farewell Tour. Guitarist Billy McCarthy, drummer Rob Allen and multi-instrumentalist Eric Sanderson have release three fantastic albums and toured the world. But it a recent statement issued by the band they concede that financial difficulties have made it too difficult to continue and their October tour will be their last. Do miss out on your last chance to see them!

Having already experienced a very busy year having appeared on Kanye West album The Life Of Pablo and releasing EP There’s A Lot Going On; Chicago rapper Vic Mensa takes it even further by reportedly appearing on the new Gorrillaz album and headlining at cool London club Heaven.

Anyone after alternative electronica needs to give Gigantic a good look. Manchester producer Mr Scruff will be keeping it unreal when he takes over Queens Social Club in Sheffield and turntablist master DJ Yoda is taking his superb mixtape inspired by recent TV horror smash Stranger Things on the road. Also, be sure to check out electro enthused rockers The Ramona Flowers. The Scott Pilgrim influenced Bristol band take cutting edge electronic sounds that ranges from the delicate to the downright dirty.

Math rock extraordinaires Black Peaks have just hit the road to tour material from their newly released record Statues. They will be joined as dual headliners by hardcore band HECK who are known for their insane on/off stage antics who are also promoting a new album; Instructions.

Scottish punk Skids were amongst the first to make a foray into New Wave. First demanding attention when they broke the Top 10 with single Into The Valley and continued to chart highly until their break in 1985. They will be touring in June of 2017 which marks a decade since they returned to the stage. We also have tickets for their post punk contemporaries The Pop Group. The avant-garde agitators will be embarking on a tour this autumn.

And finally, we have tickets for folk rock band Matthew And The Atlas and singer song writer A R Rahman is about to launch his September tour.