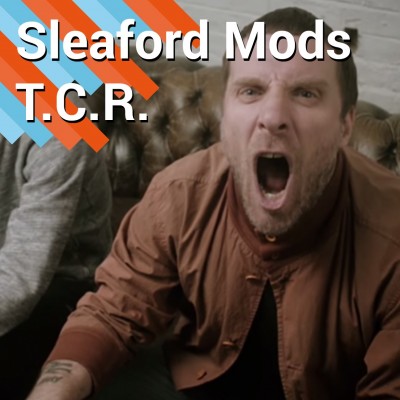 Early in the year it was announced that laptop ranters Sleaford Mods had signed to the ultimate bastion of independent music; Rough Trade. Making total sense, the uncongenial pair who use pre-recorded LoFi beats for an unconventional karaoke-esque live performance are now backed by a label that is known for selecting acts that defy obvious commercial appeal in favour of essential artistic worth.

The first release on Rough Trade will be the EP T.C.R. which is released on 14th of October. The acronym of the title song stands for Total Control Racing which was a seventies/eighties copycat of Scalextric in which players race miniature cars endlessly on a closed track. Similarly, the subject of the song is stuck in a repeating circuit of lacklustre nights out. Buying a return bus ticket knowing full well by the time he is done the buses won’t be running only to be patronised, bored and dissatisfied. Despite recognising the inevitable frustration, he continues to do it again, and again, and again.

The new video follows the announcement Sleaford Mods will play a second night at Rock City in their adopted home of Nottingham owing to the massive demand that remained after the initial night sold out. With the rest of the tour expected to soon sell out, you better grab your ticket quick!