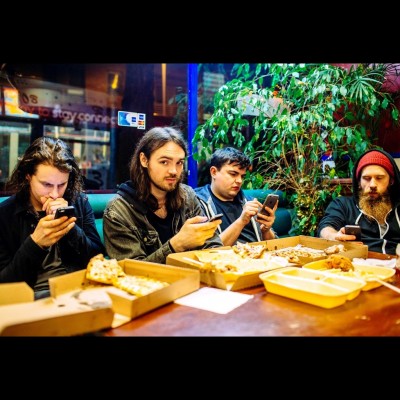 Tweet
HECK are known for their intense and chaotic shows which sees the death defying band leaping into audiences, creating impromptu climbing frames from their own amps and vaulting from heights that are truly not safe. The heavy rock band have also earned a reputation for producing relentlessly fast riff based amazing songs and highly inventive videos. HECK unites the unique talents of drummer Tom Marsh, guitarists Jonny Hall and Matt Butch Reynolds sharing vocals, plus the one and only Paul Shelly on bass.

Forming in 2010, the band originally went under the title Baby Godzilla and included Butch, Marsh and Shelly. Keen to establish themselves in the flourishing Nottingham music scene they quickly recorded and released the demo EP titled NPAG.

Following the release of the original demo Marsh invited Hall to join the band as a last minute replacement. Finding that the new addition to the band worked well he became a permanent member and they began to work on new material together.

The first finished product of the sessions was the single At The Oche. A ninety-eight second blast of energy that would typify the sound of the band. The song was promoted by an accompanying video directed by David Lankester. It was shot in their practice studio and would culminate with a laser show any dance festival would be envious of.

The band reached out to Lankester for the video for their next song Powerboat Disaster. Shot in the wasteland behind a pub, the video captured the destructive nature of the band and sees the word POWER built out of ten-foot-high wooden signs burning furiously from being doused in kerosene. The flames were so intense they melted Marsh’s drumming stool.

The two songs were featured on the simply titled EP Oche, which was released through independent label I’m Not From London in 2012. The band had a stamp created depicting them involved in a wrestling match for the front and back cover and then spent many agonising evenings hand printing the copies, gluing the sleeves together and even DIY shrink wrapping each copy. They became victims of their own success as their reputation grew spurring on greater demand resulting in the band having to handcraft ever greater numbers of the EP.

It was perhaps for this reason they released the following EP Knockout Machine in 2013 through download only. However, the band still had some lessons to learn as shown when they lost their newly won sponsorship from Jägermeister following an ill-advised video for the track Trogloraptor featuring irresponsible drinking.

Baby Godzilla continued their trend for extreme videos when they once again teamed up with director David Lankester for the single Don’t Touch That Dial. Released on 7” through Venn Records, the band envisioned a snuff video which was to be realised by Lankester who had them bound, whipped, force fed maggots and pelted by paintball guns.

The single built up a momentum for the band who then released The Great Hardcore Swindle single and a split single Greedy Pete/ We Don’t Like You with bandmates God Damn. However, with the rise in notoriety came the unwanted litigious attention of the Japanese film company that owned the rights to the name Godzilla. Staring down the barrel of a cease and desist order they changed their name to HECK in 2015.

HECK brought out their debut album Instructions in March 2016. The album saw a creative leap for the band, hinted by the singles released after the initial EPs, by incorporating the sheer force of their live shows with songs that tended to be longer and with more depth. The album features the song Good As Dead which, in typical fashion for the band, is accompanied by a stunning video in which HECK perform their very own dance routine.

Their place in the heavy rock scene was formalised when they were invited to perform at the Kerrang! Awards Nominations Party, which they promptly destroyed, and receiving the nomination for Best New Band at the Metal Hammer Golden Gods Awards.

HECK tickets are now on sale through Gigantic.com - so book today!

See them take to the massive stages at Leeds & Reading Festival taking place from Friday 26th until Sunday 28th of August.

Gig tickets are always limited so get yours early to avoid disappointment.

This September sees the boys team up with Black Peaks to obliterate stages all across the UK. The tour includes two nights in London at Boston Music Room before pushing on to Plug at Sheffield, The Slade Rooms in Wolverhampton and Talking Heads in Southampton.

HECK Have Been Supported By Chambers

HECK Are Now On Tour!