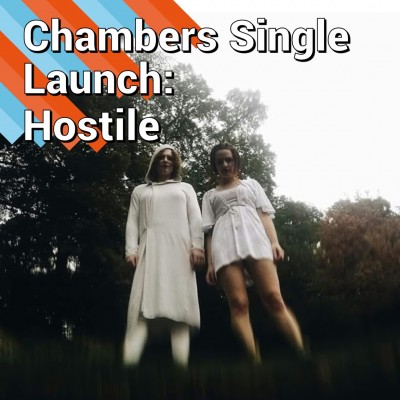 Leeds / Hull based two piece Chambers have been building an audience, drawn to a style they have termed ‘Sister Doom’. Despite being a two-piece, guitarist/vocalist Aeris Houlihan and drummer Eleanor-Cara Churchill draw on dark imagery to create a huge heavy sound with their fuzzed-up songs that capture a rampant energy trapped within a claustrophobic rhythm.

The pair have already played support for the likes of HECK, Black Honey and Dinosaur Pile-Up. Having earned praise from the music press and now signed to Nottingham based label I’m Not From London they look ready to strike out on their own as a headline act.

With the upcoming launch party for their brand new single Hostile taking place on Saturday 10th of December at Lofthouse in Nottingham, we caught up with Eleanor to ask her about the soon to be released song, how the band was formed and life up North.

Despite both being major Yorkshire cities, Hull and Leeds often feel a world apart. How did the pair of you meet and begin working together?

We joined another band at the same time but the music wasn’t really for us. I was on the look-out for a guitarist for a separate project, I thought Aeris was perfect for it. We clicked straight away.

Hull to Leeds is only a train ride away and it’s nothing when I consider how much I love the band. Aeris comes over to Hull too and the scene over there is fantastic, especially for the type of music we do.

Both cities enjoy of wealth of independent venues, pubs and shops. Where do you like to hang out?

(In Leeds) Bar wise we like to hang out at Brewdog, Wharf Chambers, Headrow House and Brudenell. We’re also a fan of Bad Apples, places like Little Tokyo are great for Japanese food and definitely always up for a bit of art. I used to work at The Hepworth in Wakefield which is only a 15-min train journey away, lovely place.

In Hull, Newland Ave is fab generally, The Sesh on Tuesday is always great fun and all the amazing shows and events at Fruit. Hull Truck has a whole bunch of amazing theatre, there’s loads to do and see.

Your sound is typified by coldly removed vocals, a pneumatic rhythm and crashing chorus which you describe as ‘Sister Doom’. What more can you tell us of this self-described sound?

Sister Doom actually came around as a term because we never knew how to describe our music. We’ve always found it difficult to describe as there’s a horror element in there, but it’s not necessarily ‘doom’. We’ve always considered our relationship as sister like so it sort of became Sister Doom.

Sister Doom is also the name of the next track we'll be releasing in February. Our single cover represents her, dressed in white with red hands. Something beautiful but dark at the same time which is something we both love. She controls what we do and we control her. Essentially, what she represents is the energy and mood we have created as a band.

I can’t help but be reminded of the movements of machinery in the brutal cyclical nature of your music. Does coming from cities based on manufacturing and industry have an unconsciousness effect upon the sound perhaps?

No, I can’t say it does. I grew up in rural Worcestershire myself. The passion I have for playing the music we do comes down to taste.

I don’t feel the music reflects our geographical locations though – I’m proud to live in Hull for example, but for me the music is more of a reflection on human emotion, love and the adrenalin you feel from watching horror films.

You’ve recently enjoyed praise from the likes of BBC Radio 1’s Huw Stephens. How did you capture his attention and have you benefitted from the high-profile acclaim?

BBC Humberside were hosting a slot on Huw’s show. Our track ‘Disappear’ was chosen to be played as part of that. It was great and really grabbed people’s attention, so we totally have the team at BBC Humberside to thank for that one!

The new single Hostile was inspired after watching the film Nicholas Winding Refn’s biopic Bronson. What was it about this unrepentant yet charismatic violent figure who remains incarcerated to this day that and his descent into criminality that compelled you to write the song?

I think because of the nature of what we already do, which is quite raw and almost angry, it sort of fits well with the characteristics of Bronson. It was easy to write a song that is a representation of his anger.

Going back to what we mentioned before about liking things that are very beautiful and dark at the same time. We liked that Bronson also had a soft side to him. Particularly during the scene where he expresses himself through his art which in itself is very beautiful.

Incidentally, did you know Bronson served some of his stretch at Hull Prison?

I think I may have been told that at one point yeah! Interesting!

Hostile is released by Nottingham based label I’m Not From London Records. How did you get involved with them and what have been your experiences so far?

I first heard about I’m Not From London Records through interviewing the band No Nothings a while ago. Aeris gave them a call and the rest is history. We feel INFL have really understood what we wanted to do and the support they have given us so far has been fantastic. We feel lucky to be working with such a lovely bunch of human beings.

The magnificent city of Hull has been marginalised for too long but has now been appointed UK City Of 2017 Culture in recognition of the abundance of unique creative endeavours in art, music theatre and more that it produces. Why do you think Hull has been demonised in the past and will Chambers be involved in any of the upcoming events?

Hull is already a city of culture, so I feel Hull actually becoming the city of culture in 2017 was inevitable, it fully deserves it. I’ve never experienced such a close knitted creative community before. Everyone in Hull supports each other and wants each other to do well.

Perhaps Hull becoming such a tight knitted community can sometimes create a little defensiveness towards outsiders - particularly when some people think the city has been forgotten about. I think it's important for people to branch out and expose themselves in the city, just as much as it's important for other cities to embrace what talent Hull has to offer. It's about working together.

People are generally super excited for 2017 which is ace and Chambers will get involved with whatever comes our way.

For many, 2016 has proved to be a turbulent year characterised by the death of their musical heroes. What have been your experiences of the past twelve months and what can we expect from Chambers in the year ahead?

It’s been a year to remember for everyone. Some good some bad!