"Outstanding performance by all bands, but mostly Chambers"

Not been to that venue before but it certainly won't be the last time! The promoters in this instance, engineer and regulars were all welcoming and super positive. Whilst I primarily went to see Chambers, Minatore and The Madeline Rust were superb. I will be looking out for those again certainly. Whilst Hollywood were not specifically my bag, they were certainly excellent musicians and a most accomplished band and group of performers. As previously stated, Chambers were outstanding and despite the diminutive size of the venue, it felt massive from the torrent unleashed from the wall of noise spat through the mic and hammered across the drum skins. Good work all round. 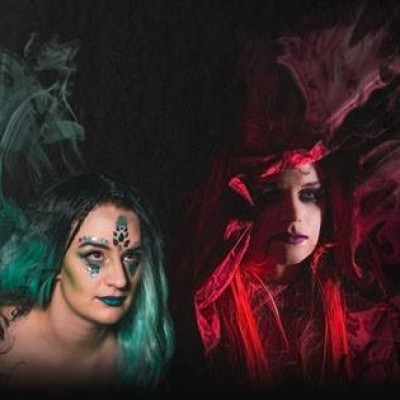 Sat 10th December at The Lofthouse

To release the single "Hostile" from Hull/Leeds "sister doom" band CHAMBERS we've decided to put together this stella lineup of INFL associated bands at the amazing Lofthouse, we hope you can all join us, we think it's gonna be rather special!!

“The concept of sister-doom is sort of like a spirit that drives us to do what we do” the pair explain. “It’s sort of that feeling you get when you’re stood in a dark, empty house with all the lights turned off. A figure suddenly appears in front of you and your eyes try to work out if it's real or not. It’s sort of that adrenaline you get from the unknown. Like something you shouldn’t do but you just want more.”

New single 'Hostile' emerges on December 2nd via I'm Not From London Records, and it's a probing, dramatic piece of music.
Coming from a very real place, 'Hostile' finds Chambers etching out ground that could only be their own. Tune in now.
- Clash Magazine

Blues Rockers, WHISKY STAIN are a two-piece Rock band from London and Nottingham formed in 2011. Their music ranges from bass driven dance influenced stompers through to blues drenched guitar based thrillers. The duo are known predominantly for their huge sound on stage and catchy vocal melodies.

Last year their single "The Lords Revolver" was released on I'm Not From London records featured as on the trailer to Sky Atlantic’s series Ray Donovan and rumour has it they have an amazing new single coming out very soon...

Nottingham supergroup led by Dick Venom's Will Wilkinson play their very first gig tonight. Comprising of former members of other Nottingham bands such Captain Dangerous, Practical Lovers, and judging by their demos, Hollywood promises to be an extremely excting band. Haunting, piano built crescendo ballads and twisted lyrics this band are a must check out one for all fans of Cave, Cohen and dark romantic soul rock!

Chambers are playing at Waterfront Festival 2017

Interview With Chambers About The Launch Of Hostile