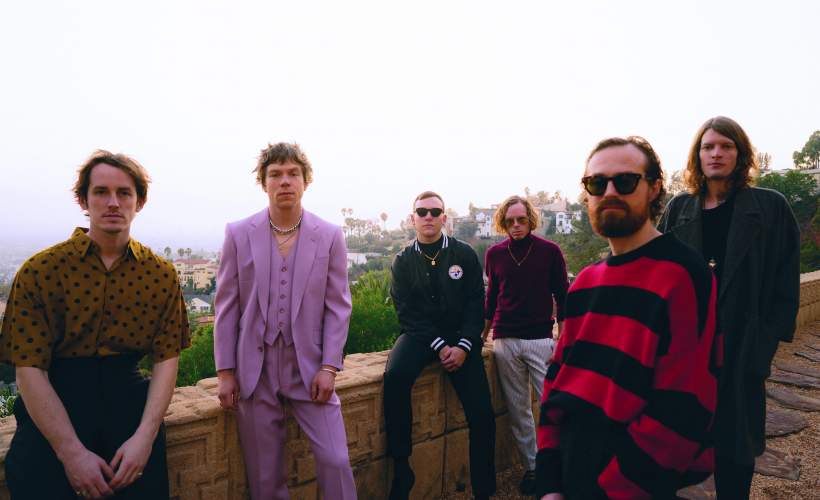 They were bloody brilliant, class act and terrific performers

Fantastic performance by cage the elephant, venue was suitable and acoustics were really good.

Tweet
Cage The Elephant will be rampaging in the UK once again. Their tour takes them to O2 Victoria Warehouse and Alexandra Palace in London during February 2020 - be there!

Real fans will not want to miss out. So, make sure you set a personal reminder with Gigantic so we can alert you with a text message or an email just before they become available at 09:30 on Friday 27th of September.

A headrush of garage rock - Cage The Elephant come crashing in to become your favourite band.

Excitement is already high and still rising as is the demand, so make sure you do not hang about and book your tickets for Cage The Elephant before they are all snatched up.

Fortunately, placing your order with Gigantic is made easy as your purchase can be made 24/7 at home or on the go using your smartphone, tablet or computer.

Although chart success in England was an unlikely first step to fame for a band from Bowling Green, Kentucky, mainstream rockers Cage the Elephant achieved just that. Formed by Matt Shultz, Brad Shultz, Jared Champion, Lincoln Parish, and Daniel Tichenor, the group earned a contract with the Relentless label and released the "Free Love" single late in 2007. A support slot for the Pigeon Detectives beckoned in early 2008, and follow-up single "Ain't No Rest for the Wicked" reached the Top 40 in June. The group's self-titled debut followed soon after, becoming a respectable commercial and critical success.

Two years later the band returned with the single "Shake Me Down," while early 2011 saw the release of second album Thank You Happy Birthday, which debuted at number two on the album charts. In early 2012, the band released the live audio/video package Live from the Vic in Chicago, which captured performances from their sold-out two-night run at the famous Chicago venue. Returning to the studio, the band recorded its third album, Melophobia. Released in October 2013, the album saw Cage collaborating with Alison Mosshart (the Kills, the Dead Weather) and featured the modern rock radio hit "Come a Little Closer." During the Melophobia era, Cage the Elephant parted ways with their founding guitarist, Lincoln Parish, who went on to focus on producing for other artists in Nashville.

In late 2015, the band released its fourth album, Tell Me I'm Pretty, which was produced by the Black Keys' Dan Auerbach. The ensemble embarked on both nationwide and European tours in promotion of the record throughout 2016 to rapturous success; the album would later win the Grammy for Best Rock Album in 2017. Cage the Elephant continued performing throughout early 2017 with a series of intimate, stripped-down, unplugged shows around the States that spanned their entire back catalog. The performances were captured and chronicled in their second live release, Unpeeled, which arrived in the early summer of 2017.

This year sees the release of their killer new album Social Cues. It was heavily influenced by Matt Shultz's divorce. Exploring dark emotions, the album was produced by John Hill and included the single "Ready to Let Go" along with "Night Running" featuring Beck.

“The band’s best work to date.” - The Indepedent

“This audacious album succeeds not by altering Cage's distinctive identity but by exponentially amplifying it.” - Uncut

“The album's introspection paired with its urgent energy make Cage The Elephant sound more passionate than ever.” - Entertainment Weekly

With only limited supplies of Cage The Elephant concert tickets available, you really need to book them early or risk missing out. Gigantic is proud to offer a huge array of essential gig tickets, so stick with us to enjoy a great service in providing you an unforgettable experience!

Related to Cage The Elephant

Grab a ticket for Cage The Elephant with Gigantic!

Cage The Elephant To Rock The UK

The Subways The Killers