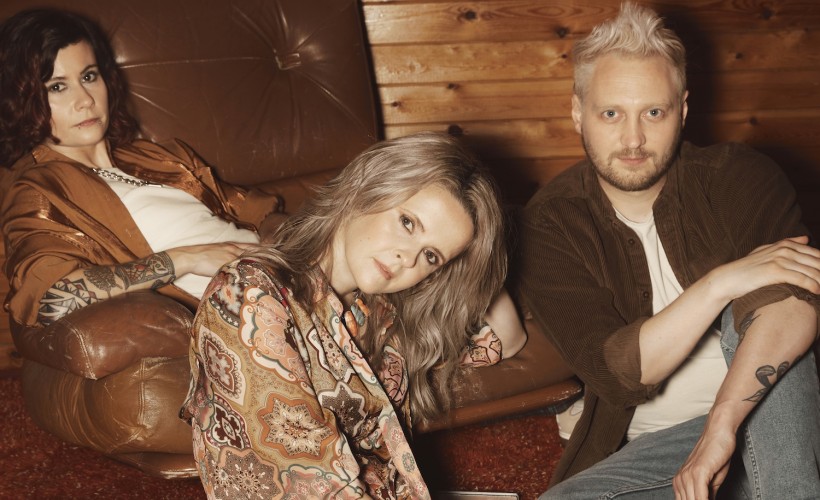 The Subways The Sugarmill, Stoke-on-Trent

THE SUBWAYS are one of the most exciting live bands on the current touring circuit, thrilling crowds with their explosive rock sound and wild stage performances. Firm summer festival favourites, they have graced the main stages of over 100 international festivals. Whether in front of 100 people or 250,000 the band always deliver a high octane and thoroughly entertaining set.

The demand is growing so make sure you book your The Subways tickets before they all go. Gigantic makes booking your favourite gig tickets easy as you can place your order 24/7 using your tablet, smartphone or computer from the comfort of your home or while busy on the go.

The Subways are a high-spirited alternative rock outfit featuring Billy Lunn (guitar/vocals), Charlotte Cooper (bass/vocals), and Josh Morgan (drums). The British band formed in Welwyn Garden City in 2002, when the three musicians were only in their early teens. Despite their young age, brothers Morgan and Lunn (the latter of whom took his mother's maiden name as his rock & roll moniker) were longtime music fans, having raided their parents' record collection as kids. Growing up on AC/DC, the Carpenters, T. Rex, the Beatles, and the Ramones helped instill a love for noise and melody in the siblings, while an Oasis performance on Top of the Pops convinced Lunn to begin mastering his father's old acoustic guitar.

Around this time, Lunn met kindred music fan (and future love interest) Charlotte Cooper. Both shared a fondness for Nirvana, the Pixies, the Jam, Mudhoney, and the Sex Pistols -- thus, Cooper started to learn bass in order to play alongside Lunn, while big brother Morgan took up the drums. The trio soon delivered an energetic, punk-inspired sound, which they captured on a series of homemade recordings. The Subways then used those recordings to secure shows in London, and in 2004 the bandmates cemented their on-the-rise status by winning the Glastonbury Festival Unsigned Performers Competition.

Prior to the year's end, the Subways began working with producer Ian Broudie (Echo & the Bunnymen, the Coral) for the recording of their debut album. Packed with four Top 40 British singles, Young for Eternity was released in the U.K. in June 2005. An appearance on Fox's popular sitcom The O.C. (as well as a spot on the show's soundtrack) followed that fall, and Young for Eternity received an American release in February 2006. The album's most popular track, "Rock & Roll Queen," went gold in the U.S., and the group decamped to California to record its follow-up effort. Partially inspired by Lunn's breakup with Cooper, 2008's All or Nothing introduced a harder sound courtesy of veteran producer Butch Vig. All or Nothing peaked at 17 on the U.K. charts. The Subways accentuated their British roots on 2011's Money and Celebrity by hiring producer Stephen Street, best known for his work with the Smiths and Blur. The band continued to be a regular on the European music festival circuit, then released their first single off The Subways, "My Heart Is Pumping to a Brand New Beat" in 2014. In a break from tradition, they took a full-ownership approach for the eponymous 2015 release, so titled because it was self-recorded, produced, mixed, and released, a first for the band.

The excitement continues to build and we expect The Subways concert tickets to sell very fast. Plus, with only limited amounts being put on sale by the event organisers, you will have to act quickly and place your booking before they all go. If you have any questions, then contact our dedicated customer service team who can assist with every question when selecting from our huge range of essential gig tickets. Remember, award winning ticket vendor Gigantic is the very best place to come to make a stress-free booking before enjoying your big night out.

Related to The Subways

The Subways tickets available with Gigantic!

The Subways announce the new dates for their shows!