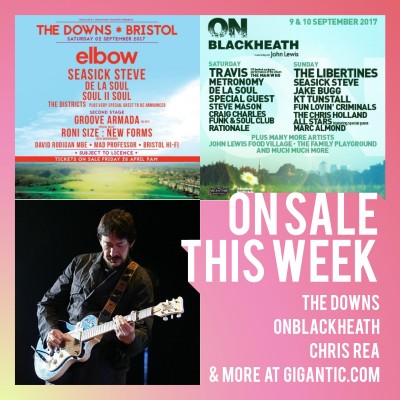 Taking place at the stunning London Blackheath common, OnBlackheath offers cooking master classes and amazing adventures with plenty on offer for children to do. Plus, a fantastic festival line-up that includes Travis, The Libertines, Metronomy, Seasick Steve and many more!

The tickets are expected to sell very quickly so we advise setting a personal reminder to alert with a text message or email so you are ready for their release at 09:00 on Friday. OnBlackheath is in partnership with John Lewis.

Following the massive success of last year’s inaugural event, Bristol’s best day festival The Downs returns for another unmissable year held at the beautiful public grounds. It promises to be one of the musical highlights of the year.

Celebrate the most memorable Disney tales with all your favourite characters in Disney On Ice presents Passport to Adventure. Join Mickey Mouse, Minnie Mouse, Donald, Goofy and Daisy on a journey to the timeless worlds of Disney’s The Lion King, The Little Mermaid, Peter Pan, and Disney’s Frozen.

The wonderful show tours to Glasgow, Newcastle, Manchester, Birmingham, Sheffield and London so you can enjoy all the magic close to home. A delightful treat for all the family, so book your tickets before they go!

Disney on Ice presents Passport to Adventure tickets will be available at 09:00 Friday

Linkin Park rose to prominence at the turn of the millennium to become one of the leading lights of the nu metal movement. Tapping into hard rock, electronica and rap, their music connected with fans around the world seeing them sell 70 million albums and win two Grammy Awards.

They are poised to release seventh studio album ‘One More Light’. The record features guest appearances from Pusha T, Stormzy, and Kiiara and looks set to be one of the year’s biggest releases. They play at Manchester Arena in July to promote the new material.

The unmistakable gravelly voice of blues inspired rock star Chris Rea has seen him sell a staggering 30 million albums worldwide. Having announced the upcoming release of the album ‘Road Songs For Lovers’ comes the news of an extensive tour to promote the new material. Catch him when he plays a stage near you.

Surrey song writer Newton Faulkner exploded with the release of his double platinum album debut Hand Built By Robots in 2007. His success has continued with each subsequent record reaching an ever-growing audience. He hits the road in November.

Sheffield festival Tramlines offers you genre spanning line up of incredible artists such as Primal Scream, Metronomy, Lady Leshurr and The Libertines.

Featuring Primal Scream, Sigma, Wlkinson, The Charlatans, James, Blonde, The Coral and more. The big names at Penn Festival go on and on!

Bringing you the best of Britpop, Beano On The Sea hosts Lightening Seeds, The Bluetones, Reef and more at Hastings Pier.

Celebrating twenty years of her stunning debut album ‘Baduizm’, neo soul legend Erykah Badu performs the triple platinum selling record over two nights at Eventim Apollo in London. Tickets are selling out fast so book yours before they are all gone.

Madness present House Of Common! A day festival taking place at Clapham Common on 28/08 featuring a wide range of awesome acts including De La Soul, Soul II Soul plus many more. It follows a number of massive gigs all over the country earlier in the month.