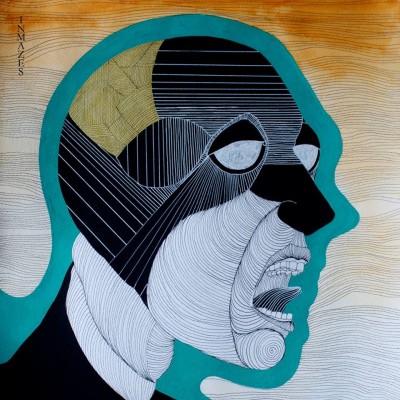 Hard rock band Vola prepare to hit the UK. See them play at Dingwalls in London on Wednesday 16th of August, 2017.

Vola tickets are expected to sell incredibly quickly so make sure you book yours quickly!

After three years of writing, recording and perfecting their craft, VOLA self-released Inmazes digitally in 2015. Prior to this album the band had already released two EP's. Guitar player and singer Asger Mygind sees a steady development from 2011's Monsters towards Inmazes: "On Monsters we started experimenting with 7-string guitars and a lot of polymetrics - odd-time signatures over a straight 4/4 beat in our case. And it worked so well on the EP that we wanted to elaborate on this for a full album. But I think we have gotten better at producing our music as a band, which has given way to a tighter and more in-your-face vibe on Inmazes. We are also one person less than on Monsters (guitarist and singer Niels Dreijer Madsen quit the band in 2012), so in my case I've had to fill out more space as guitarist and singer, as Niels also played guitar and sang a lot of vocal harmonies."

All in all, creating Inmazes after the two EP's was a liberating experience for Mygind and his bandmates. "The album format of course also allows for a more voluminous story to be told in music and lyrics, which can lead to an overall more rewarding creative experience - and by that - a more rewarding listening experience."

When Mygind was in highschool he started writing songs and jamming with his friends in a rehearsal room in the basement of his parents' house in Copenhagen. "The collaboration grew out of a common interest in melodic rock and weird time signatures. We'd listen to stuff like Dream Theater, Freak Kitchen, Opeth and Porcupine Tree and tried to play their songs in order to explore what kind of sound we could create as a unit. And also because it was just a lot of fun!"

After recording a couple of demos the band recorded their EP, Homesick Machinery, in 2008. But that was a different VOLA than it is today. Besides Mygind only keyboard player Martin Werner can be heard on the EP. In the following years the band found its form, with bass player Nicolai Mogensen and drummer Felix Ewert joining in 2011, before the recording of Monsters.
At times futuristic, the music of VOLA has references to tech-prog and pop as well. Further touching on the band's influences, Mygind states: "I've always been a big fan of bands like Opeth and Porcupine Tree, and they write very dynamic songs, so I think the influence to explore dynamics and moods came from that place initially." Then again, he admits, he is influenced just as much by just the opposite: groove-based, monotonous music. "Some big influences of heavier music are Devin Townsend, Soilwork and Meshuggah. But it doesn't have to be metal at all as long as it has a spectacular beat, groovy odd-time groupings, an interesting mood or something else along those lines. Massive Attack‘s 100th Window is a big influence. It's monotonous but it still feels like it's constantly evolving. Steven Wilson‘s Insurgentes and Ulver's Shadows Of The Sun both have a darkness that we find very fascinating."

"What we've always liked from artists like Steven Wilson and Devin Townsend is that the music can change the physical state you're in. It's not just sound reaching your ears. It's a force of a larger scale. There is nothing like a big chorus that suddenly opens up and elevates your body to the point where it almost feels like you levitate from the floor. That's one of the feelings we want to evoke with our music."

Lyrically, Inmazes deals with entrapment. Mygind: "The album tries to capture this feeling of being trapped in mental mazes and not being able to fully experience happiness, basically. How is this struggle visualized in your own mind and how do your surroundings react to the behaviour caused by it. Where the EP Monsters deals with strategies on how to escape the negative thought patterns, Inmazes is more about the distance these thoughts can create between people."

Inmazes was mixed by Asger Mygind himself and mastered by Jens Bogren of Fascination Street Studio. Bogren worked with Opeth, Katatonia, Soilwork, Amon Amarth, Symphony X, Paradise Lost, Devin Townsend, Fates Warning and Arch Enemy, amongst others. Mygind: "I've been a fan of Jens Bogren ever since I heard The Great Cold Distance by Katatonia, which I think is an amazing record with a fantastic production and mix. I like the way he keeps the elements very punchy but still maintains a sort of softness to the overall sonics. He mastered our EP Monsters and we were so fond of the result that we really also wanted him to do Inmazes too. Jens has a signature sound which works great if you want a fat and dynamic mix or master, that is pleasing to the ear."

Inmazes was received very well by a large number of metal and progrock blogs throughout the world. In the same time VOLA impressed with the cleverly animated videos for the quite positive-sounding rock track Gutter Moon and dreamy Emily, the quietest song on the album. The videos are created by bassist Nicolai Mogensen and his girlfriend, and are clearly in line with the album's artwork, which is based on a watercolour/acrylic drawing by Danish artist Anders Thrane.
Before the end of 2015, the band played high-profile gigs like Euroblast in Germany and ProgPower Europe in the Netherlands. Says Mygind: "We felt very proud. We haven't played that many shows in total, so to step upon a big stage in a foreign country and experience the incredibly positive energy coming from the crowd, was amazing. We didn't know what to expect, so it blew us all away."

With only limited supplied of Vola concert tickets available you will have to be quick off the mark and book yours before they are all gone.