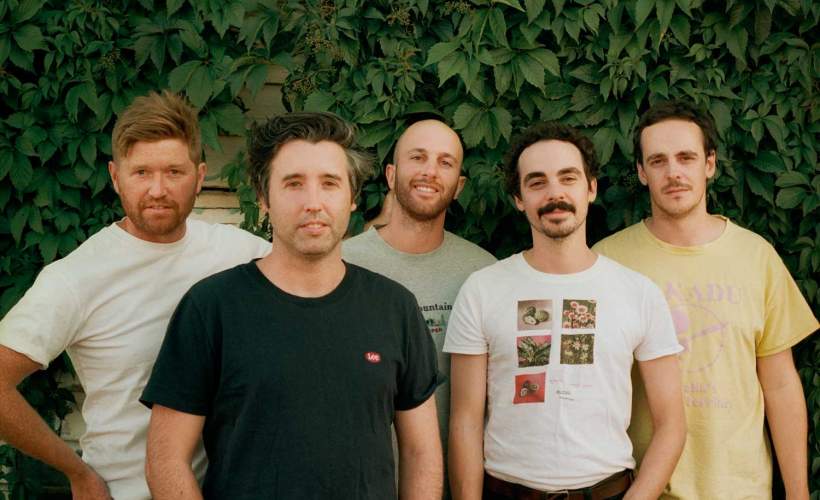 I saw 20 mins of Rolling Blackouts C.F at Green Man this summer, and from that was looking forward to a longer set at the O2 Academy Oxford - and they did not disappoint! With a guitar heavy line up (lead, acoustic, bass and rhythm(?)) - plus the drummer obvs! - they have a certain almost traditional rock line-up presence on stage dare I say it, but they really do have the driving tunes that get inside your head. Only gripe of the night was the stage lighting - all back-lit which plays havoc with any pics you try to take, but so minimal and low-key that virtually the whole gig was played out in semi-darkness! This may have been the band's artistic decision, but not a great audience experience IMHO.

"No Boy Azooga but otherwise good"

I had wanted to see Boy Azooga, who were billed as the support act, but they must've cancelled. However, the other bands, Fur, Bodega and Rolling Blackouts CF were very good. I particularly enjoyed Fur's retro take on Indie Pop and would recommend them to my friends. It was odd that there was no mention of Boy Azooga but I still had a good night.

It's rare that a band's debut album sounds as confident and self-assured as Rolling Blackouts Coastal Fever's Hope Downs. To say that the first full-length from the Melbourne quintet improves on their buzz-building EPs from the last few years would be an understatement: the promise those early releases hinted at has become fully realized here, with ten songs of urgent and passionate guitar pop that elicit warm memories of bands past, from the Go-Betweens' jangle to the charmingly lo-fi trappings of New Zealand's Flying Nun label. But don't mistake Rolling Blackouts Coastal Fever for nostalgists: Hope Downs is the sound of a band finding its own collective voice.

The hard-hitting debut is a testament to Rolling Blackouts C.F.’s tight-knit and hard-working bonafides: prior to forming the band in 2013, singers/guitarists Fran Keaney, Tom Russo, and Joe White had played together in various garage bands, dating back to high school. "Over the years, we built up our own sound and style, guitar pop songs with bits of punk and country” says Keaney. “Then when we started this band, with Joe Russo [Tom’s brother] on bass, Marcel [Tussie, Joe White's then-housemate] on drums, we had this immediate chemistry. We started to let the songs go where they wanted to go”.

The band's first gigs included friends' bars and old shopfronts. After a split EP with You Yangs (another Russo brother's band), released in the form of a frisbee, they self-released the Talk Tight EP in 2015, with Sydney-based record label Ivy League giving it a wider release the following year. Talk Tight garnered plaudits from critics, including legendary rock scribe Robert Christgau. In 2017, Sub Pop would join the effort, helping to release The French Press EP, bringing the band's chugging and tuneful non-linear indie rock to the rest of the world as they settled into their sound with remarkable ease.

Hope Downs was largely written over the past year in the band's Melbourne rehearsal room where their previous releases were also written and recorded. The band's core trio of songwriters - Fran Keaney, Joe White, and Tom Russo - hunkered down and wrote as the chaos of the world outside unavoidably seeped into the songwriting process. "We were feeling like we were in a moment where the sands were shifting and the world was getting a lot weirder. There was a general sense that things were coming apart at the seams and people around us were too”. Russo explains. “The songs on this album are like a collection of postcards about wider things that were going on through the lens of these small characters."

The album title, taken from the name of a vast open cut mine in the middle of Australia, refers to the feeling of “standing at the edge of the void of the big unknown, and finding something to hold on to.”

With recording sessions largely taking place in the Australian winter of 2017, the band escaped the Melbourne frost and headed to drummer Marcel Tussie’s hometown in Northern New South Wales. "We were right at the foot of this beautiful mountain next to a creek," says White. "We could play out into the bush through the night”.

"We didn't really want to record in a studio," says Keaney. “We thought we'd get away up North, somewhere where it was warm, and record the songs live in the same room. We wanted to make sure it sounded like us," White explains. With the help of engineer/producer Liam Judson and his portable setup, the band recorded and co-produced these ten guitar pop gems over the course of two weeks.


Hope Downs possesses a robust full-band sound that's all the more impressive considering the band's studio avoidance tendencies. If you loved Talk Tight and The French Press, you certainly won't be disappointed here - but you might also be surprised at how the band’s sound has grown. There's a richness and weight to these songs that was previously only hinted at, from the skyscraping chorus of ‘Sister's Jeans’ to the thrilling climax of album closer ‘The Hammer’.

The first single ‘Mainland’ follows Tom Russo’s pilgrimage to the island of his grandparent’s birth, reflecting on his own love and privilege while a refugee crisis unfolds not far away, while second cut ‘Talking Straight’ wonders “where the silence comes from, where the space originates”, and suggests loneliness be faced together.

And then there's the sprawling overture ‘An Air Conditioned Man’, which portrays the slow burning panic of a salaryman and features some beautifully tricky guitar work weaving in and out of frame as well as a surprisingly effective spoken-word section from Tom Russo during its closing moments. “As the world around him gets faker and faker, he realises he's getting further away from the idealism of his youth."

Indeed, Hope Downs is as much about the people that populate the world around us - their stories, perspectives, and hopes in the face of disillusionment-as it is about the state of things at large. It's a record that focuses on finding the bright spots at a time when cynicism all too often feels like the natural state. Rolling Blackouts C.F. are here to remind us to keep our feet on the ground - and Hope Downs is as delicious a taste of terra firma as you're going to get from a rock band right now.

Get excited for all the new events just announced!