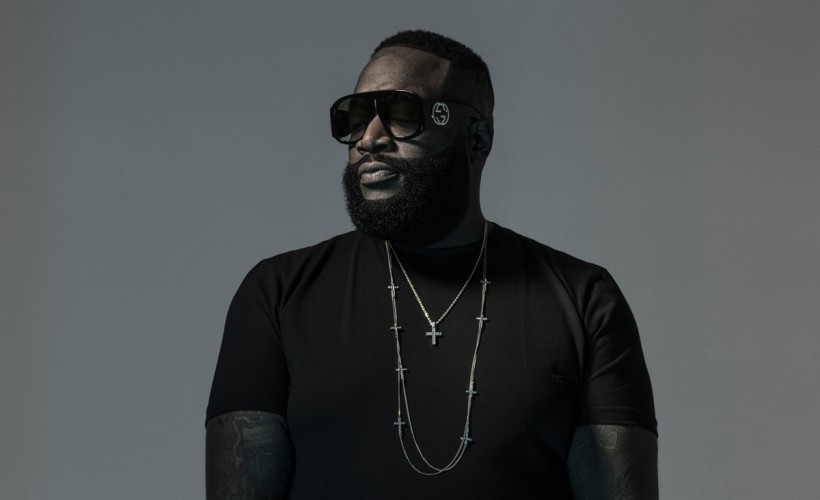 Rick Ross will be performing two concerts at London's IndigO2 on Monday 7th and Tuesday 8th October. Get your tickets below.

Head of Maybach Music Group, and arguably one of the hottest rappers in the game, the Miami based phenomenon Rick Ross hits the UK for his new tour SELF MADE 3 on 7th & 8th October 2013 at indigo2 London. The SELF MADE 3 tour coincides with the release of RICK ROSS's 6th studio album 'MASTERMIND' which is released in September 2013.

Rick Ross's initial rise in the rap game came from his colourful glamorisation of Miami's reputation for drug trafficking. The distinctive 300-pound, six foot rapper tattooed with pictures of AK-47s embraced his city's reputation on his debut single "Hustlin'” in 2006. While Atlanta and Houston artists were establishing their cities as Southern strongholds, Ross aimed at putting Miami back in rap's national spotlight.

Ross, real name William Roberts, grew up in Carol City, Florida, an impoverished northern suburb of Miami. Influenced by artists like Luther Campbell and the Notorious B.I.G., Roberts formed local rap group the Carol City Cartel and began rapping in the mid-'90s. (He took his rap name from Los Angeles drug kingpin "Freeway" Rick Ross, who ran one of the largest crack cocaine distribution networks in the country during the '80s and early '90s.) Ross had a brief stint on Suave House Records, former label of Eightball & MJG before he ended up on Miami-based Slip 'N' Slide Records, the label home of Trick Daddy and Trina. During the early to mid-2000s, he became popular and well known locally through touring with Trick Daddy and guest-appearing on a few Slip 'N' Slide releases, but didn't release any solo material until 2006.

Once "Hustlin'" caught the ear of a few executives within the national industry, a bidding war ensued that included offers from Bad Boy CEO Sean "Diddy" Combs and The Inc. (formerly Murder Inc.) president Irv Gotti. However, Def Jam president and veteran rapper Jay-Z stepped in and signed Ross to a multi-million-dollar deal. The Miami anthem "Hustlin'" went on to receive gold status from RIAA in May 2006 and sold over a million ringtone units before the physical release of his debut album, Port of Miami.

After founding his own label Maybach Music Group, in 2009 Ross self-released his albums Deeper Than Rap and Teflon Don under the guidance of legendary Miami DJ Khaled, both of which debuted at #1 and #2 positions respectively on the Billboard 200 album chart.

Teflon Don featured the hit single "B.M.F. (Blowin' Money Fast)", which cemented Rick Ross's status as one of the biggest rappers in the world, with guest spots from Jay-Z, Mary J. Blige, Lil Wayne and Drake, culminating in him being awarded 'Man Of The Year' by hip hop bible Source Magazine.

The last album God Forgives, I Don't garnered many more accolades, with MTV naming him Rapper of the Year for 2012. Again the album included features from super heavyweights of the rap world, Dr. Dre, Jay, Andre 3000 (Outkast) and Drake , as well as members of his own MMG team Wale and Meek Mills, again showing his stature in the rap community.

With so many hit records under his belt, and with many already considered classics for a generation, Rick Ross's charismatic live show is one not to be missed.