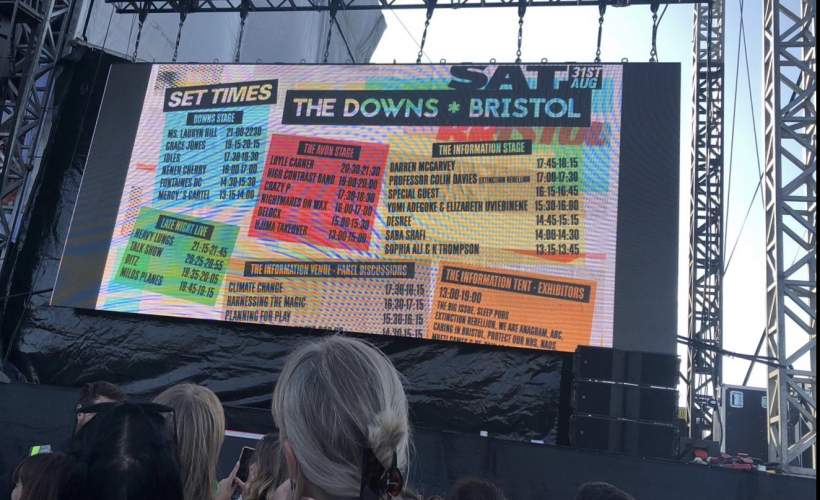 Amazing organisation, lot of all you want to have the best day to see your favorites band’s shows 😍

This has become a really well organise event. Band choice as awesome; food, drinks and toilets all spot on. Can't wait for next year's.

Ms. Lauryn Hill, American singer, songwriter, rapper and founding member of hip-hop pioneers The Fugees will headline the Downs Stage on Saturday night and is the festival’s first female and international headliner. Hill’s only solo album, The Miseducation of Lauryn Hill, earned her five Grammy Awards and remains one of the most critically acclaimed hip-hop albums of all time.

IDLES will play their largest gig ever in Bristol, following a huge 12 months for the band. The local five-piece’s popularity has soared in recent years, following the release of their 2017 album Brutalism, and more recently Joy as an Act of Resistance in 2018 and in 2019 IDLES were nominated for Best Breakthrough Act at the Brit Awards.

Swedish singer, songwriter and rapper Neneh Cherry will also feature at The Downs Bristol. The stepdaughter of jazz trailblazer Don Cherry, Neneh forged her own groundbreaking blend of pop, dance, hip hop and R&B picking up Brits, Grammys and MTV Europe Music Awards along the way.

Conal Dodds, co-founder of co-promoters Crosstown Concerts:
“2018 was a great year and we’re taking it one step further for 2019. This is a line-up that really reflects Bristol, one of the city’s most up and coming bands in IDLES, a style and musical icon in Grace Jones and one of the most renowned hip-hop stars of the last 20 years in Lauryn Hill.”

The festival’s stand out Avon Stage will be home to a dance and hip-hop line up, headlined by one of the UK’s most esteemed up-and-coming hip-hop artists, Loyle Carner. Also on the bill will be English electronic outfit Crazy P, DJ and electronic music composer Nightmares on Wax and a special performance from drum & bass outfit High Contrast, with the accompaniment of a live band.

Discussion and debate has been a key part of The Downs Bristol since its inception in 2016 and once again festival goers can expect the return of The Information Stage, a space where key note speakers address issues affecting UK society. This will transform after dark into a music stage featuring new musical talent, after the huge popularity of last year’s line-up.

The Downs Bristol is an event for all the family - making sure younger music fans have a great time, the Children’s Area is returning bigger and better than ever, with activities, workshops, dancing and much more.

Related to The Downs

Heavy Lungs told us about their experiences at The Downs

Gigantic was at The Downs 2019 - check out our review!

Come to Gigantic to get your tickets for The Downs

Gigantic has ticket for The Downs

Come to Gigantic to get tickets for The Downs