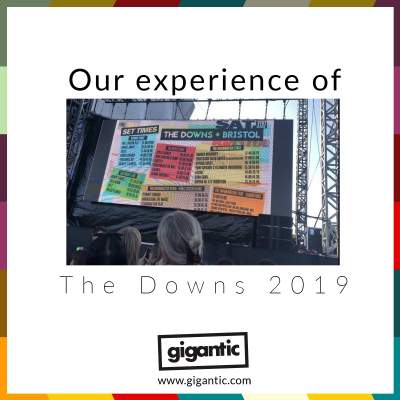 It was all about the chilled vibes as #GiganticGigGoers descended on Bristol festival The Downs. However, the passion would take hold and fans truly felt the music throughout the day. Boasting a suitably eclectic line up for a city renowned for its bohemian attitude and high creative output, former Fugee Ms Lauryn Hill, icon Grace jones and local heroes IDLES topped the bill on the main stage whilst there were many soon-to-be huge acts playing elsewhere.

Excitement was already high before Irish post punks Fontaines D.C. arrived on stage, having proven to be one of the biggest breakthrough bands of the year with the release of their rousing debut album ‘Dogrel’ which smashed into the Top 10. Having been delayed almost twenty minutes by minor technical difficulties the sense of nervous excitement throughout the crowd was tangible and erupted into screams of passion and energetic pogoing as they tore into opening track ‘Chequeless Reckless’ and easily met the high expectations of the crowd.

The boys from the better land were followed by Neneh Cherry, a huge favourite of the city famed for being instrumental in the creation of trip hop. Not only were we treated to such classic tracks as ‘Manchild’ and ‘Woman’ but also ‘7 Seconds’ on which she teamed up with Youssou N'Dour back in ’94. A poignant set which united the youth eager for a better future with the elders who know the power of her political and artist statements the first time round.

Ask anyone who they were at The Downs to see and invariably the answer was IDLES. Their aggressively positive message has ignited the flame of passionate devotion with listeners around the world, and the people of Bristol are very proud of their local lads done good. Meet with a roaring chat of their name led a huge contingent of their fan club the AF Gang and none other than Annie Beavis (drummer Jon’s Mum), they celebrated a year since the release of seminal second LP ‘Joy As An Act Of Resistance’ with a set which included ‘Never Fight A Man With A Perm’, ‘Great’, ‘Love Song’, ‘Danny Nedelko’ which included a guest appearance from the Heavy Lungs singer after whom it was named and ‘Rottweiler’ plus such classic songs from first album ‘Brutalism’ like ‘Heel/Heal’ and ‘1049 Goth’. Wonderfully chaotic, guitarists Mark Bowen and Lee Kiernan took turns leaping into the moshing masses while Joe Talbot explained why each song in the set is an anti-fascist song. Amazing seeing their rip up their home turf and we cannot wait for the third record currently on its way!

As the sun began to set, the Information Stage was transformed into Late Night Live with each of the acts appearing handpicked by IDLES for their promising excellence which kicked off with Milo’s Planes and then le enfants terrible Ditz – both bands insanely good at such a young age! Having previously heard of London based art rockers Talk Show but not yet having the pleasure, I was eager to catch them and certainly was not disappointed. Furious riffs that seemed like the missing link between Sonic Youth and Fugazi couldn’t fail to grab the attention of even the most casual of onlookers who soon became a gleefully rowdy thrashing mob. But just when you thought it couldn’t get any more crazy, Heavy Lungs hit the stage and the night exploded into a non-stop flurry of burning energy and stage diving. Seriously, if you don’t this Bristol band yet then you are sadly missing out because their unique brand of fearsome garage rock is marking them out as the next big thing as indicated by the reaction of their home crowd who howl in delight.

Oozing star quality, Grace Jones kicked off her set with her take on Iggy Pop’s ‘Nightclubbing’ as she mesmerically danced on a raised stage with an impressive huge black cape and gold skull mask. The word iconic gets thrown around far too easily and while Jones elegantly snaked ever closer to audience, her hypnotic voice and sultry R&B sound entranced the entire festival and left the impression of having witnessed history. Meanwhile, Loyle Carner gave a lively performance over at The Avon Stage and proved a perfect choice to thrill festival revellers.

All good things must come to an end and Ms. Lauryn Hill was rightly chosen as the big finish on the final night of the summer. The Grammy Award winning superstar first brought the attitude with opening song ‘Lost Ones’ before bringing messages of positivity with ‘Everything Is Everything’ and challenging the rich and powerful that would divide and oppress with forceful track ‘Final Hour’. Addressing the growing problem of heightened racial tensions, growing poverty and the worldwide rise of the Far Right, Hill urged the people to take action; “We want to be the generation that did something. We want to bring about equality, not disharmony”. Her set closed with three of the biggest Fugee bangers including their cover of ‘Killing Me Softly’ (one time!!!), ‘Fu-Gee-la’ and finally culminating with ‘Ready Or Not’.

Well done The Downs, you totally smashed it and proved that you really are a festival for those passionate about music. We cannot wait to see who you round up in 2020 and we will see you then!