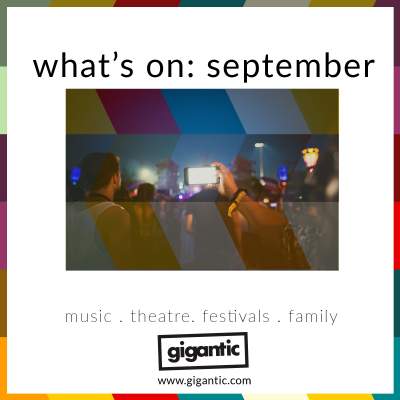 So summer is now officially over! How was yours? We hope it was filled with great memories of fantastic festivals and truly special outdoor shows. If you have a truly amazing photo on Facebook or Instagram , make sure you share it with us using  #GiganticGigGoer and you could win one of 5 x £20 Gigantic vouchers! Check HERE for further details.

Though the nights are going to get longer, don’t despair because there are loads of great gigs and essential events coming up in September. Take a look at what is coming over the next month.

Fancy a drink? There is nowhere better to sample the tastiest ales, beers and bitters than at the Derby Beer Convention.

Somerset funnyman Russell Howard always looks at the bright side of live. He kicks off his arena tour this month so grab your ticket right now.

Definitive indie band The Flaming Lips dropped one of the biggest albums of the summer; ‘King’s Mouth’. They promote it with headline dates at Manchester Academy and O2 Academy Brixton.

Bringing the history, culture and fashion to life – Peaky Blinders: The Legitimate Festival is a must for any true fan! It also includes live performances from Primal Scream, Anna Calvi, Slaves and more!

Fancy a bit of Britpop? Grab your gazelles and don a bucket hat before making your way to Star Shaped Festival. Cast, Geneva and Mark Morriss from The Bluetones plus many more will hit a stage near you.

This year, alt rockers from Chicago Wilco will release their highly anticipated new album ‘Ode To Joy’ plus play major gigs at Manchester’s Albert Hall and Eventim Apollo in London.

Fans of the amazing fantasy comics and the box office smash hit films need to see Marvel Universe LIVE! A story so epic, it has to be seen to be believed.