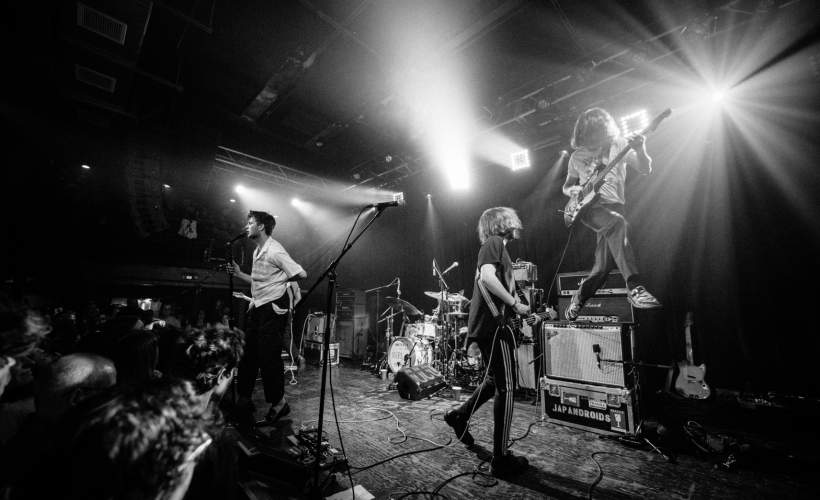 Being old, I was glad I'd inadvertently purchased seat tickets. It's obvious the band are still on the way up and already incredibly popular. I just thought that this was maybe a little too big for them at this time. But then I'm usually wrong and it was a really great night.

Even though they were only on stage for 54minutes, they went through every emotion, leaving me wanting more, but satisfied. Can't wait to see them again.....

Whilst I love rescue rooms as a venue, and fontaines dc were absolutely amazing live, the crowd absolutely ruined it for me. 98% of the crowd were enjoying themselves and being respectful, however there was a small group of around 10/15 middle aged men in towards the front who were just shoving about and throwing drinks everywhere and just making it unpleasant for everyone else around them. I am a barely 5"3 20 year old girl and to say it was unpleasant is an understatement. Right at the end, the drummer tried to give the person in front of me his drumsticks, and one of these men shoved me right out of the way with his elbows, baring in mind his elbows directly lined with my face, so I tried to shove him off me and he turns back around (he's a man who could have been three times my age) he looks me in the eye and delicately puts his hands on my shoulders and shoves me back. I have never been so disgusted in someone's behaviour at a concert, let alone someone who is old enough to be my dad. Absolutely would love to see the band again, however I'm severely put off booking more tickets due to this experience. Upsetting to say the least. Ruined the night for me.

Thekla was a really good unique venue. Fontaines were awesome!

“I've played this about 15 times since yesterday. It's a little bit like hearing Idles for the first time. I really think there's something here” - STEVE LAMACQ

“The energy, the urgency and the emotion of these brilliant new songs made me stand up and take notice that this is the band I've been waiting for” - KEXP

Following their recent signing to Partisan Records and the announcement of their support slot on both the forthcoming Shame tour in the UK and Ireland, and next year’s IDLES tour in the US, Dublin’s Fontaines D.C. have now shared a video for their new single ‘Too Real’

Speaking about the visuals in the new accompanying video, director Hugh Mulhern, says it is made up of "low-brow visuals inspired by Buster Keaton, James Joyce, The Dubliners and Jim Henson to discuss high- brow ramblings of some stout swilling stereotypes.”

They have now announced an extensive tour which takes them to Bristol Thekla, Brudenell Social Club at Leeds, Manchester Gorilla, Nottingham’s Rescue Rooms, The Garage in London, The Haunt at Brighton during April 2019.

Later in the year, they head out again to play O2 Manchester Ritz, O2 Academy2 Liverpool, Stylus at Leeds, The Leadmill at Sheffield, O2 Institute Birmingham, O2 Academy Oxford, O2 Forum in London, Concorde 2 at Brighton, Bristol SWX and The 1985 Southampton in November 2019.

Excitement is already high and still rising as is the demand, so make sure you do not hang about and book your tickets for Fontaines D.C. before they are all snatched up. Fortunately, placing your order with Gigantic is made easy as your purchase can be made 24/7 at home or on the go using your smartphone, tablet or computer.

Fontaines D.C. met as a quintet in Dublin, influenced and driven in equal measure by the rich history of their hometown’s counter-culture, their response has been to make concise and immediately authentic post-punk, channeling often-unassumingly poetic lyrics with a distinctive gritty Irish brogue that has done anything but fall on deaf ears.

The last year has seen Fontaines D.C. release three hotly received double A-side singles, all of which were named as singles of the week by Rough Trade, and garnered early support from the likes of Steve Lamacq and others on BBC 6 Music where they have previously been b-listed with their latest single ‘Chequeless Reckless’ (self-released) for 4 weeks, presented 6 Music Recommends and played live in session. Similarly, they have also earned plaudits from DIY, Dork, Stereogum, KEXP, Fred Perry Subculture, London in Stereo, So Young and every major Irish publication. The band have also played a number of sold-out shows across Europe, Ireland and the UK earning a reputation for their brooding and trenchant live performances, supporting the likes of IDLES, Metz, The Horrors, Girl Band and The Lemon Twigs, as well as playing festival slots at Primavera Pro, The Great Escape, Dot to Dot, Electric Picnic, London Calling, Hard Working Class Heroes and Simple Things Festival.

This month the band will be embarking on a full UK/IRE tour with Shame and in December will play a short series of headline dates, which have already begun to sell out. They have also announced further European and UK tour dates as well as main support on the IDLES US tour and a SXSW appearance for 2019 - Full dates can be seen below.

Fontaines D.C. have gone from strength-to-strength with each release, and with a vast array of critical acclaim, renowned live shows, a series of sold out releases behind them and their recent signing to Partisan, the new single and forthcoming dates stand as a huge statement of intent, which is not to be ignored.

Fontaines D.C. were nominated for the Mercury Prize 2019 with their debut album ‘Dogrel’