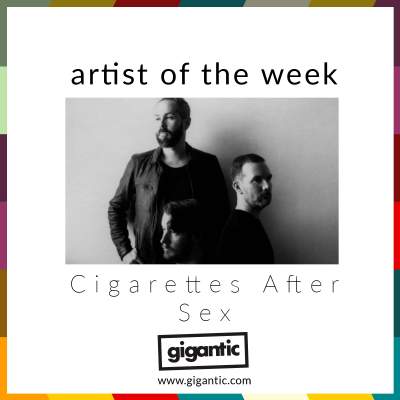 Velvety smooth and hauntingly exquisite, the refined songs of Cigarettes After Sex hang in the air and curl around thin strands of light streaming into room from behind closed bedroom curtains. Combing the ambient element of dream pop with the considered relaxed feel of slowcore, there is an inviting post coital pleasure to sink deep inside of and revel within.

While the expansive almost gaseous feel of Cigarettes After Sex may be integral to their sound, it was an almost accidental bi product of necessity having come about when songwriter Greg Gonzalez was forced to record in the stairway whilst studying at the University Of Texas. Having nowhere else to play, the echoing sound became a defining feature on his debut release ‘EP, I.’. It would include the single ‘Nothings Gonna Hurt You Baby’ which has now clocked up a staggering 93 million streams on YouTube alone.

Relocating to Brooklyn, Gonzalez continued to develop his delicately brittle feel as heard on the single ‘Affection’ which was tied with an achingly beautiful cover of REO Speedwagon's ‘Keep On Loving You’.

Finding an online following by releasing the tracks onto YouTube, Gonzalez was able to cultivate a truly global audience leading for a demand for live performances all over the world. Snatched up by the pioneering label Partisan Records after recruiting a full band, he recorded and released the eponymously titled debut album in 2017 to huge fanfare. Not only was it praised by the critics and named by tastemakers Rough Trade in their esteemed list of Albums Of The Year, it also achieved an impressive commercial success charting in many countries including the UK where it fell well within the Top 40.

This year sees Cigarettes After Sex release their eagerly awaited sophomore album ‘Cry’. Recorded during late night sessions in a Spanish mansion found on the idyllic Balearic island Majorca, the band shunned formality in favour of seeking a truly authentic sound which they achieved by self-producing and engineering all by themselves. Working totally independently, they were able to take a truly spontaneous approach, writing songs mere minutes before committing them to tape and so capturing a true creative energy and the momentum of a live performance. It would later me mixed by Craig Silvey (Arcade Fire, Yeah Yeah Yeahs).

“I’ve always avoided studios. There’s something special about recording out in the world, some kind of X-factor that comes from the character and atmosphere of wherever it is that you’re working that becomes essential to the feeling of the music.” – Greg Gonzalez

‘Cry’ is released by Partisan Records on Friday 25th of October on CD, MP3, 12” vinyl (standard black + limited clear). Make sure you join Cigarettes After Sex next year when they tour the new material during March of 2020. Tickets are released at 09:00 on Wednesday 04th of September, so make sure you set a personal reminder right now.