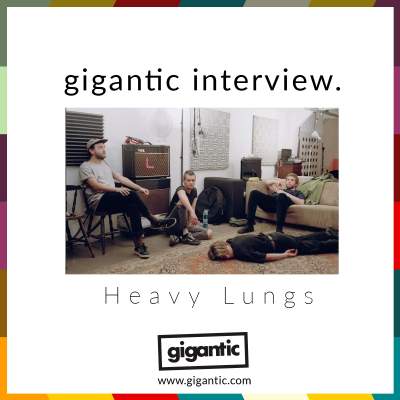 Seemingly appearing out of nowhere in a furious explosion of lacerating guitars, unhinged stream of conscious vocals and machine-gun rapid-fire drums; Heavy Lungs merge punk, garage with art rock and are rapidly transforming from simply being named ones to watch to truly becoming a force to be reckoned with.

Having quickly earned a fearsome reputation for their uncompromising aural assault when playing live, Heavy Lungs continued to impress with the release of debut EP ‘Straight to CD’ last year and this summer has seen them smash it on the festival circuit, truly elevating them to ‘cult band’ status.

The boys from Bristol have already announced that they will release a second EP titled ‘Measure’ later in the year and have arranged a tour in November to promote the new material. And today, they have given us a first taste by dropping the first single '(A bit of a) Birthday' without any warning.

Described as a “fuck you to forced fun”; '(A bit of a) Birthday' is a thrilling introduction to ‘Measure’ with the onslaught matched by a video which has emerged from the dark imagination of Jordan Martin whose previous work includes the video for ‘Dirty Air’ by Two Door Cinema Club and animation supervisor on the Bastille’s ‘Joy’ video.

‘Measure’ will be released on limited edition pumpkin 12” by Balley Records on Thursday 10th of October. Click HERE to pre-order.

Gigantic spoke to Heavy Lungs guitarist Oliver Southgate about their wild shows, the ideas behind their new song plus their upcoming second EP.

It has been a big year for Heavy Lungs and if you’re not on the road then you’re in the studio. What have been some of the highlights of 2019 so far?

Ah man it's all been good, the tour at the start of the year feels so long ago but we have really fond memories of it. All the festivals we've done have been great, especially going to Germany for the first time, that was a trip! The recording is my thing though and getting to step up the process has been a dream, working with Alex Greaves (producer on both EPs) again and James Trevascus (engineer) is so fun because they're two of the best guys we know!

You recently returned home and played a truly riotous set at The Downs. Did you expect to provoke such an intense reaction?

Not at all man! We were on the same bill as Grace Jones and Loyle Carner (to name only two!), we were blown away by the reception.

You will be appearing at Ritual Union and 2Q Festival Lincoln in the coming months, do you enjoy appearing festivals and how do they differ from playing your own gigs?

Festivals are fun because they feel like a little expedition or something, it's like crystal maze working out who to speak to sometimes and who actually knows what's going on! But seriously, it's great, it's all about the crowds, people feel free and it shows.

'(A bit of a) Birthday' appears to be a morose look what should be the happiest day of the year. Tell us where the ideas for the song came from.

It's a flick of the chin to forced fun, we're all pretty social but we all share the sentiment that you should be able to do your own thing and not have to endure someone else's idea of fun. Especially with social media, birthdays can get a little gross these days, especially when people say it's their 'birthday month'... what the fuck is that about?

And the video is a barrage of unsettling imagery as created by Jordan Martin – what is going on?

It's all about making people double take and giving a bit of sensory overload, much like Memory Hole, that was a big inspiration.

There is a fair bit of nudity in the video, culminating with Danny Nedelko (singer) and George Garratt (drummer) prancing around a ring of fire looking like it could be a missing scene from The Wicker Man. How did the insanity come to this and did anything get singed?

The Silence of the lungs init! George and Danny can get excited and George happened to have some kerosene... The nudity is just standard them.

How did you go about writing and recording the new EP and what can we expect from ‘Measure’?

It took us a little while to write, mainly to pick the right songs for it. Birthday, for example, has had about 3 or 4 different versions. We already play two of the songs live so they'll be familiar. The closing track is my personal favourite though, I feel like it's something I'm very proud of.

Have you got a message for your fans looking forward to seeing you on tour in November?

We hope you have a lovely time, come say hi! Expect loud.