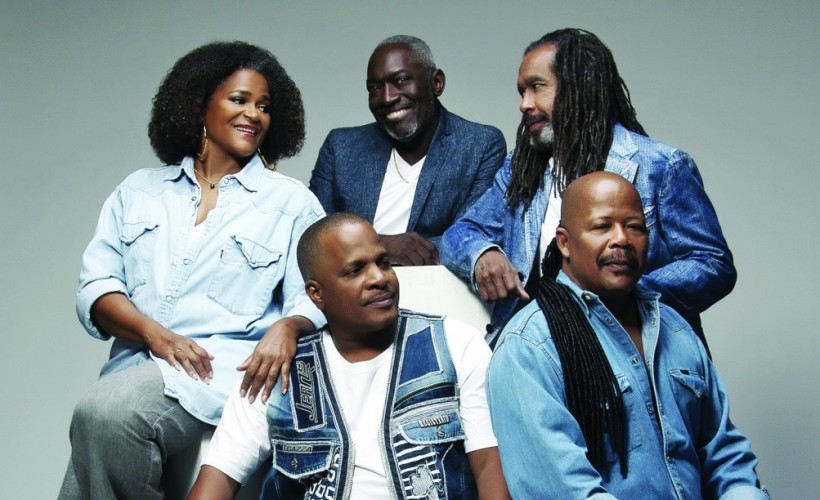 Essential carnival band Kassav travel all the way from Guadeloupe to get the UK dancing. They play a handful of UK dates that you do not want to miss!

The band has undergone many changes, and currently includes drummer Hervé Laval, trumpeters Freddy Hovsepian and Fabrice Adam plus saxophonist Claude Pironneau. Keys are provided by Philippe Joseph whilst backing vocals are from Marie-Josée Gibon and Marie-Céline Chroné.

Begun in 1979, their name from cassava; a mixture of manioc paste and coconut and they started with the aim to create the very finest Guadeloupe carnival music by revamping it for a modern audience. Adapting they style with contemporary techniques and sounds, they developed their music whilst also growing in number.

Their debut release came in first year of the bands existence and was an album titled Love And Kadance. It heralded the arrival of a new music genre called zouk which was a modern festival sound that prominently featured bass and included keyboards and brass instruments.

This was followed in 1980 by their second album Lagué Mwen which gave rise to one of their first hits; Soleil. Now firmly entrenched into the people’s consciousness, they released their 1981 third album Kassav n°3 and were joined by dancers to begin making live performances.

By the mid-Eighties they had become absolutely essential with albums An-ba-chen'n la, Majestik Zouk and Tékit izi all certified twice Gold whilst Vini pou sold Platinum.

Kassav tickets will soon be available. Set a personal reminder to arrive to you through text message or email via Gigantic so you are ready for their release at 10:00 on Friday 28th of April.

They will be returning to the UK to play two nights at O2 Shepherds Bush Empire in London in August of 2017.


Their gig tickets are limited and demand is high so we recommend you book early to avoid being disappointed.

That's all we have for Kassav! Check out their upcoming shows