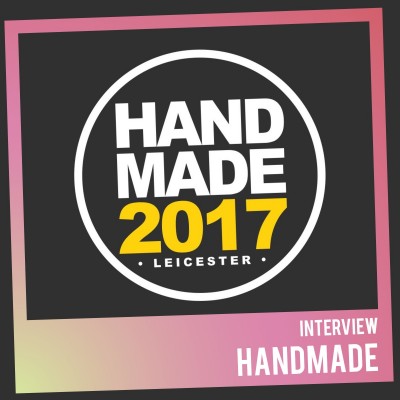 Taking place over the May Day weekend, Leicester festival Handmade is one of the first major music events of the year and by carefully selecting an excellent mix of thrilling established names with cutting edge acts it often acts as a barometer of the musical character for the coming festival season.

This year, Handmade plays host to some huge headliners such as Twin Atlantic, Frightened Rabbit, Pulled Apart By Horses and British Sea Power. It also boasts much talked about rising stars Idles, Cabbage and Honeyblood plus a few names you may not yet know but very soon will love including Life, Meat Wave and Tigercub.

Nik Sharpe and John Helps are the creative directors behind the festival and the guys responsible for all the fun. We speak to them about the involvement with the local music scene and all the excitement taking place this bank holiday.

Handmade 2017 tickets are currently on sale.

Tell us about your background and your involvement in the Leicester music scene.

John: I’ve been involved in music in Leicester for almost fifteen years now I suppose. I started putting on DIY shows at a tiny venue just to create opportunities for my own band, Maybeshewill, to play with bands I liked, and then that slowly grew in to something that was worth doing in it’s own right. It’s spawned a whole bunch of spin off things - we release records, try and help new acts crack out of the city on to the national circuit, Handmade and a few other bits and pieces - but it’s always been focussed around Leicester.

Nik: I started promoting in Leicester five years ago. The city was lost after the close to of the legendary ‘Charlotte’ and had no local scene or any touring bands coming to the city. In that five years we have turned the city around by using The Cookie as a hub for local & national music and creating a scene again. We now promote over 150 show’s a year from 100 cap to 1600 cap.

What prompted you to first start Handmade?

John: It was a bit of a weird time in Leicester… We’d been doing this more locally oriented event called White Noise Christmas for a few years, but for a number of reasons it felt like that had run its course. The (much bigger) Summer Sundae Weekender had just announced that it wouldn’t be back the next year, and it generally felt like the city was stagnating a bit. We knew we wouldn’t replace any of those events, but we wanted there to be something in the city that was shouting about new music, and the amazing homegrown acts we have here, but it wasn’t clear what that was going to be if we left it to its own devices, so we started putting the event together ourselves.

There must be so much hard work that goes on behind the scenes in organising and running a festival. Can you tell us about some of the challenges you face in putting on Handmade?

John: It’s a big old task, but we’re slowly figuring it out year by year. I don’t want to say it gets easier, but it doesn’t feel as overwhelming now there’s a slightly bigger team behind it and a bit more delegation and collaboration with Nik. The fun bit is curating the line-up, the tough bit is making sure every last person knows about it. You want everyone to fall in love with the music as much as you, but reaching people is such a mammoth task as people are bombarded with a million things to do on social media. Hopefully the line-up shines through.

Nik: Each year feels like it’s getting easier but each year presents its own new problems. Me & John spend hours together going through every possible issue and problem and hopefully fixing the right solution.

The festival often works as a fantastic indicator for the musical character for the coming year. How do you go about selecting the acts for your roster?

John: That’s a really lovely thing to hear. I hope so! We always have a wish list when we start talking about each years event, and as we all promote acts year-round we’re constantly engaging with new acts and getting insights in to what people are in to and what works in the city.

Nik: I take great pride in developing emerging talent through Handmade and what we do across the city during the year. It’s imperative we have a finger on the pulse and bring the most exciting new bands to the city. Ploughing through magazines, blogs, radio shows is a weekly task to unearth the next gem.

Recent years has seen a massive proliferation in local festivals. Is this because acts are looking for more opportunities to perform live now that recorded music makes less money or is it simply because some sort of cultural change has created greater demand?

John: There’s definitely more of a place for boutique, curated events that cater to specific audiences or specific geographical areas that there may not have been a decade or two ago. Its difficult to know the causality of that though!

What have been the stand out sets from acts that have played previously?

John: And So I Watch You from Afar in 2014 were amazing. They’re easily one of the best live bands around and were on my wish list from day one. Last year I fell head over heels for Los Campesinos!. I’d always enjoyed their records, but they got me hook line and sinker. Future of the Left absolutely blew the doors off Queens Hall in 2015.

Nik: Black Honey played an awesome set last year. A packed room was memorised by them for the entirety of the set.

You seem to have truly excelled yourselves for Handmade 2017. Who are you most excited about seeing?

John: Aww, thanks. It’s a nightmare to pick favourites, but I’m really in to the Gallops record at the moment, Midnight Organ Fight by Frightened Rabbit is one of my favourite albums, and I fully expect Pulled Apart By Horses to have on of the best sets of the weekend. All those bands have been on my wish list for the festival for a really long time.

Nik: I’m very happy with this year’s line up as it came together quite easily this time around. I’m looking forward to Cabbage, Ash Mammal, Superfood and the return of Happyness.

What would be your absolute dream line-up?

What are the future plans for Handmade?

John: Hopefully the above! I’d like us to continue to grow slowly, but lets see where things take us I guess!

Nik: It would be great to add a outdoor stage in the next couple of years but we’re happy as we are for now.