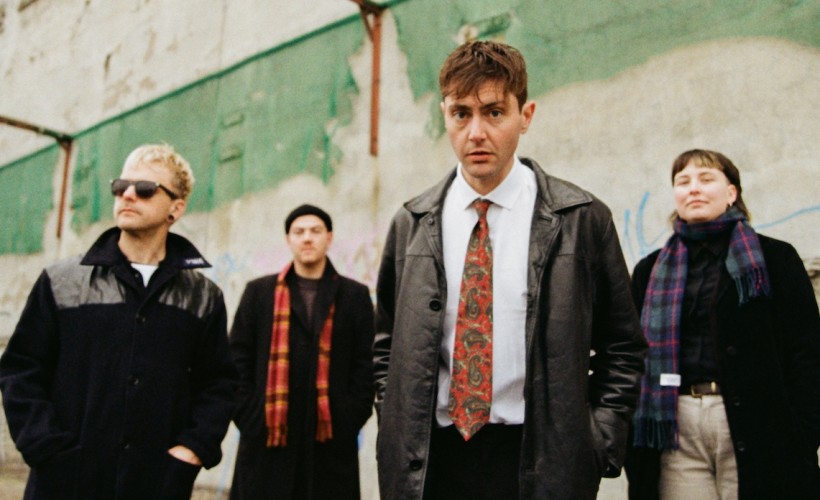 "Fun band and some serious messages."


LIFE are anchored by their hometown; the geography, history and community has always been the inspiration behind their creativity and on their third LP, North East Coastal Town, the band pay homage to Hull and its folk.

North East Coastal Town is mature; it finds the band at the height of their powers as they carve-up a wide-screen, brooding body of work that is drenched in a sense of belonging and reflection but still impressively maintains their trademark swagger and ear for pop sensibilities and guitar hooks.

*“Hull and the surrounding area runs through our DNA and has shaped us, weathered us, empowered us, embraced us and made us feel accepted.

North East Coastal Town is our love letter to the city. The album is an ode to kinship and relationship with its musical and lyrical spine picking out themes of love, desire, beauty, horror, chaos, pride and most importantly the sense of belonging.

Upon writing and recording this album it was important to us that this sense of belonging was also reflected in the album’s craft and therefore we used locally based studios, equipment, gear, and the community around us to establish what it means to belong in a North East Coastal Town.”*

All the very best troublemakers come from Hull. LIFE are the politically astute firebrand post punks proving to be amongst Britain's most vital bands. Following on from their killer debut album ‘Popular Music’, the left-wing agitators are back with second LP ‘A Picture of Good Health’.

‘A Picture of Good Health’ is not a collage of work but rather a snapshot of time; our time and the time of those around us. It’s political, but in a personal way. It’s a body of work that explores and examines the bands inner-selves through a precise period; a period that has brought pain, loneliness, blood, guts, single parenthood, depression and the need for survival and love. It is the sense and need for belonging that is the resounding endnote.

Lead single from the new album is 'Moral Fibre' - an anthemic and frenetic slice of art-punk laced with sardonic and irreverent lyrics. A stinging and frenzied shut up and step aside - a tongue in cheek reflection on the music industry, that beige scene, those that pimp poverty from Mummy’s detached house, those that trade in fair-trade cocaine and those that preach behind their keyboard. I’m taking the piss, but I’m deadly serious!"

Produced by Luke Smith (Foals) and mixed by Claudius Mittendorfer (Parquet Courts), the band home in on a bigger and more focused sound whilst also channelling the lyrical content inwards. Whereas the band’s debut album Popular Music was broadly political, the new album takes a more personal approach with beguilingly honest and brave lyrics that are bold in both sound and feeling, whilst also retaining the core DNA of their previous material.

Mez says “A Picture of Good Health is not a collage of work but rather a snapshot of time; our time and the time of those around us. It’s political, but in a personal way. It’s a body of work that explores and examines the bands inner-selves through a precise period; a period that has brought pain, loneliness, blood, guts, single parenthood, depression and the need for survival and love. It is the sense and need for belonging that is the resounding end note!”

In April, LIFE embarked on a sold out two-week European tour as main support for IDLES and will also played one of their three sold-out London shows at the Electric Ballroom. The band are also set to play numerous festivals across the UK & Europe including Liverpool Sound City, The Great Escape, 2000 Trees, Pukkelpop (BE), Best Kept Secret (NL), Pahoda (SK), Rock The People (CZ) and more to be announced.

There is only limited supplies on how many LIFE concert tickets we are given from the promoters and so we expect that they will not be around for long. Please make sure you book yours early to avoid being disappointed. Gigantic has been providing you excellent customer service and a vast selection of essential gig tickets to choose from for over ten years, so no wonder we are your award-winning first choice whenever you are looking to book for your big night out.