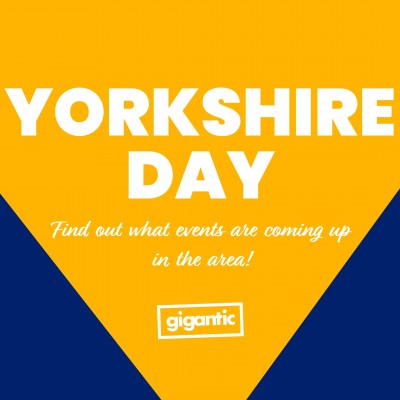 Now then! It’s Yorkshire Day and Gigantic joins in with the White Rose celebrations, bringing you a selection of the best gigs hitting the region in the coming months! Plus, check out some of our favourite Yorkshire artists too!

From the wonderful wilderness of the moors to the dramatic Brontesque beauty of the northeast coastline, the gritty northern cities plus the quaint, picturesque villages – it’s the county that has it all, famed for its no-nonsense attitude with a seemingly endless amount of musical talent.

Keep scrolling to check out the awesome gigs you can go to – grab your tickets with Gigantic right now!

Having impressed with debut album Popular Music and incredible sophomore LP A Picture Of Good Health; Hull heroes LIFE are getting ready for the release of third record North East Coastal Town with the announcement of an autumn tour.

The latest project of cult legend Adrian Flanaghan; Acid Klaus is the perfect hedonistic fusion of electronica and psyche rock guaranteed to blow your mind. Grab your ticket and get ready for one hell of a party!

Following on from dropping remarkable debut record Something Good Lost In Time; Sheffield based indie gang BlackWaters have gone from strength to strength and are just on the cusp of breaking out as something truly special.

Yorkshire is packed full of awesome venues all over the north, offering the best of alternative music. Post punk poets Porridge Radio play Leeds Irish Centre on Sunday 30th October, you can see October Drift at The Leadmill on Wednesday 26th October and HENGE take the audience of Yellow Arch Studios, Sheffield to outer space on Friday 14th of October.

Scouse superstars Courting are touring in September, and hit Yorkshire playing Hull hotspot The Polar Bear, The Fulford Arms at York and Sidney & Matilda in Sheffield. November sees The Bug Club hit the regions roads and you can see them at Foundry in Sheffield and iconic Leeds venue Brudenell Social Club during November.

Leeds is the perfect place to mosh in October, as you can see As December Falls at Stylus, Anthrax are on at O2 Academy and H.E.A.T play The Warehouse. Also, make sure you head to Hull to catch Cancer Bats tearing it up at Tower Ballroom on Thursday 15th September.

Pop fans get to see Sugababes at O2 Academy Leeds and O2 Academy Sheffield during October. And Calum Scott will be playing Bonus Arena in Hull on Saturday 8th October.