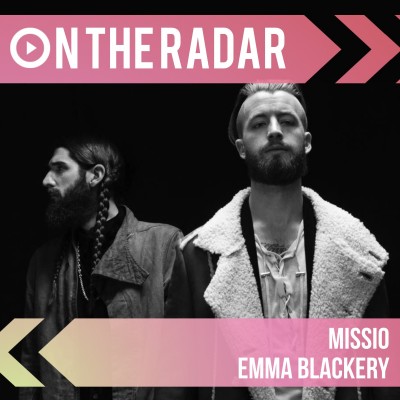 Bad boys Matthew Brue (lead vocals) and David Butler (producer, instrumentalist) combine to become Missio. First formed in 2014, the electronica band first started life as a Brue’s solo project before expanding to include Butler to expand the sound. The duo began by recording in a garage where they began to formulate their brooding yet anthemic sound which they took to the stage to perform in front of live audiences which saw them make the SWSX debut only a year later.

Now signed to RCA Records, they have just released their new single 'Middle Fingers'. Full of swagger, the song is a defiant stance against the trappings of fame and makes their hate of the false world that surrounds them abundantly clear. Their attack on pretention comes through a playful almost nursery rhyme vocal delivery which almost underplays the dark subject matter, backed by a pulsing synth verses and a crash of drum machine at the chorus.

With their debut album ‘Loner’ currently on pre-order the pair prepare to take over The Camden Assembly in North London in June. Tickets are just about to become available (release date 06/06) and expected to sell quickly so set a personal reminder right now.

Superstar vlogger Emma Blackery prepares to embark on an extensive tour which takes her to a stage near you. Known for her upbeat bright tempo tracks, Blackery has grown from an internet sensation to enjoying huge attendance at every performance as her fanbase continues to grow.

Her career in music is intertwined with her online fame having first started in 2010 as an introduction to her work by mixing video diaries, anecdotes and funny skits so people could get to know her big personality. Her charms certainly chimed with viewers around the world as she can boast 1.3 million subscribers who, to date, have watched her videos a staggering 142 million times giving her the perfect platform to see her new material go viral. She used her emmablackery channel to promote her debut album ‘Human Behaviour’ released in 2012 followed by second EP ‘Distance’ a year later.

She has just released her brand-new track ‘Nothing Without You’ which has already amassed close to 350,000 streams over the past two weeks through her YouTube channel alone. The song sees her look back over all the mistakes and regrets that led to a breakup.