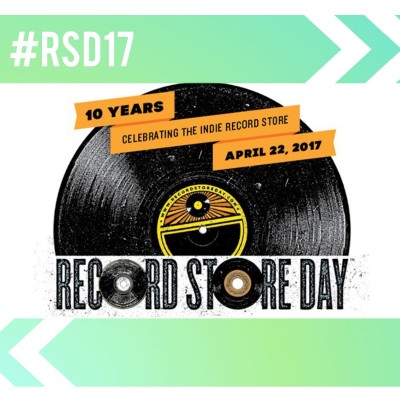 It seems that a day doesn’t go by without another clickbait story about how vinyl is now outselling just about everything including the kitchen sink, but it wasn’t so long ago that physical records seemed consigned to history from the threat of streaming and illegal downloads. The knock-on effect was a mass closure of even the well-established chains and the near absolute disappearance of the record shop form the high street. However, even today your local record shop is still feeling the punch as supermarkets and giant online retail companies have been quick to cash in on the goldrush as shopping habits have changed.

Record Store Day was first founded in the US by Eric Levin, Michael Kurtz, Carrie Colliton, Amy Dorfman, Don Van Cleave and Brian Poehner in retaliation to the rampant closures which has left many towns and cities without a focal point for discovering new music. Plus, many recording artists found themselves out of pocket being forced to make their music available for streaming resulting in the value of recorded material depreciating drastically. Taking their influence from the worldwide success of Free Comic Book Day, they wanted to reinject the energy and excitement that came with that side of music culture and over the years they have been met with success.

There can be little doubt that Record Store Day became the obvious sign, if not the causational changing force, that people once again wanted the tangible ritual pleasure of selecting the music to play and the joy of enjoying the accompanying sleeve artwork.

Now hitting its tenth year, Record Store Day celebrates a decade of championing independent retailers by uniting over 200 participating stores many of which are playing host to live music from local heroes and such well recognised names as Kate Nash, Izzy Bizu and Maximo Park.

For those of you preparing to get up in the wee hours of the morning to queue for the chance of getting that extra special pressing, we salute you. We know all about the agonising long wait followed by a desperate dash and you can read all about our adventures at Rough Trade Nottingham during Record Store Day 2016 HERE.

We have listed some of the great records you might be lucky enough nab on Saturday. But even if you don’t, we still have tickets available so you can enjoy the giddy thrill of an amazing gig.

Wakefield’s best loved sons The Cribs reunite with their former label buddies Wichita to release an extremely limited gold vinyl 10th Anniversary Edition of, arguably their greatest record - Men’s Needs, Women’s Needs, Whatever. The classic album boasts a flawless track list containing the songs Men’s Needs and Our Bovine Public which continue to set indie discos alight plus fan favourite I’m A Realist which is the highlight whenever they play live.

The Cribs tickets are currently available.

Laura Marling is noted as the future of folk, with her initial albums Alas, I Cannot Swim and I Speak Because I Can plus her forth record Once I Was An Eagle all having been nominated for the illustrious Mercury Music Prize. Her RSD offering is a gorgeous double disk LP pressed onto clear vinyl of her stunning performance at York Minster Cathedral in 2011. The set draws on work from the first three Marling albums and greatly benefits from the acoustics of the monolithic historic space.

Terrible twosome Slaves are official RSD Champions and will be playing a secret (?!!?) gig for Sister Ray Ace later today. Last year saw the hot pink re-issue of their debut album Are You Satisfied? immediately snatched up and their second album Take Control repressed white complete with 35mm photo diary and gold foil cover is expected to follow suit.

Manic Street Preachers : Your Love Alone Is Not Enough – 12″

Manic Street Preachers re-issues are becoming a bit of a regular thing for RSD as previous classic albums such as The Holy Bible and Everything Must Go have hit their twentieth anniversaries. This year they released a special 12” of the single Your Love Alone Is Not Enough taken from their resurgent record Send Away The Tigers which was released a decade ago. Penned by Wire, the song sees Bradfield and Nina Persson of The Cardigans represent competing identities locked in struggle as an inner monologue.

Named as an official RSD Champion, poet and Ted Hughes Award winner Kate Tempest also makes an entry. Her phenomenal second spoken word studio album Let Them Eat Chaos has been reimagined as a double disk LP titled Let Them Beat Chaos / Let Them Speak Chaos with one featuring just the vocals parts, the other only the accompanying beats. One will be coloured white and the other black to further illustrate the difference.

East Sussex indie band British Sea Power have always enjoyed cult status and are pretty much the definition of what RSD is all about! Having only just released their brand-new album Let The Dancers Inherit The Party their submission is a split 7” single of their melancholic yet somehow euphoric song Bad Bohemian and infectious track Keep On Trying (Sechs Freunde).

Uh oh – its them! CABBAGE have made a name for themselves by causing carnage wherever they go. The Manc lads stick two fingers up to Tory Britain through sardonic sonic sedition and riotous live performances. Having only just made their name and gigging relentlessly, their RSD offering is a bright orange two disk version of their recent debut album YOUNG, DUMB AND FULL OF….

Placebo featuring David Bowie : Without You I’m Nothing – 12”

When the famed bisexual pioneer of modern rock David Bowie invited the androgynous beauty of grunge informed wastrels Placebo to support him on tour it seemed a match made in heaven. Both the former Thin White Duke and fuzzed up three-piece have a tendency for drug enthused tracks of tragic romance and alienation. This reworking of the band’s bleak love letter saw a duet between Bowie and Molko which many saw as a perfect fusion of glam spanning the two generations.

You can find a complete list of all the rare records being offered HERE.