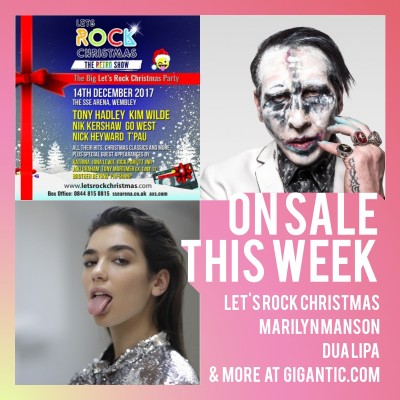 Get ready for Let’s Rock Christmas. Your favourite retro festival returns for a very merry festival celebration of everything 80’s and features some of the biggest names of the decade including Tony Hadley, Kim Wilde, Nick Kershaw and many more.

So, get yourself down to The SSE Arena at Wembley on 14th of December for a wonderful winterland accompanied by marvellous music. Tickets go on sale at 09:00 on Friday 19th of May.

Shocking, sensational and dangerous , Marilyn Manson has been at the forefront of heavy rock ever since the release of his uncompromising album debut ‘Portrait Of An American Family’ which immediately identified him as the enemy of Middle America.

Fans are eagerly awaiting the release of his tenth studio album titled ‘Heaven Upside Down’ which will feature prominently at the newly announced dates lined up for December.

Cheeky chappy Olly Murs will be performing to adoring audiences on interesting stages all over the UK as part of his Summer Tour 2017. It follows the release of his highly successful fifth studio album ‘24Hrs’ which topped the charts towards the end of 2016.

We were lucky enough chat to Mr Murs about the upcoming exciting dates. Check out our interview with the man himself.

Infamous comedian Chris Rock is known for his razor sharp stand-up routines and high profile appearances on film and TV. After exploding on Saturday Night Live in the early 1990’s, he has risen to accept multiple Grammy and Emmy awards.

Early next year, Rock will be making people laugh all over the country on his Total Blackout Tour at various arenas in January 2018.

Dark pop sensation Dua Lipa will be embarking on ‘The Self Titled Tour’ stating in October and carrying on through until November. The headline dates will follow the release of her eponymously titled album debut on 2nd of June, expected to be one of the year’s best releases.

Do not forget to set a personal reminder with Gigantic so you can be alerted with a text message or an email when they go on sale later this week.

You need to keep an eye on Gigantic because we are always releasing the tickets you need. Have a look at more of the big events going on sale this week:

Following on from an awesome all dayer, not only have the organisers of 2Q already started selling early bird tickets for Derby next year but have announced they will also take over the best stages of Lincoln in October.

The world famous EFG London Jazz Festival hosts some of the most talents players from all around the globe. An incredible month featuring every aspect of jazz.

Camden Rocks always offers a great day of huge names and special surprises. This year The Coral, Feeder and The Damned are joined by another 250 acts!

Dot To Dot is fast approaching! Held in the very best venues of Manchester, Bristol and Nottingham – the festival boats an amazing array of artists.

The War On Drugs have announced a handful of dates including two nights at O2 Apollo Manchester followed by Alexandra Palace in London. The essential indie rockers recently released new track ‘Thinking Of A Place’, their first new material since 2014 album ‘Lost In A Dream’, which is a staggering 11 minutes long.

Multi award winning songwriter Richard Thompson has announced a tour for October. The world-famous player has taken home the illustrious Ivor Novello Award, a lifetime achievement from BBC Radio plus a Grammy nomination. Don’t miss your chance to see one of the world’s greatest living guitarists performing at a stage near you.

Gigantic always has an incredible selection of vital gig tickets so you know where to come whenever you are looking to book your big night out. Check out these amazing events that are on sale now: