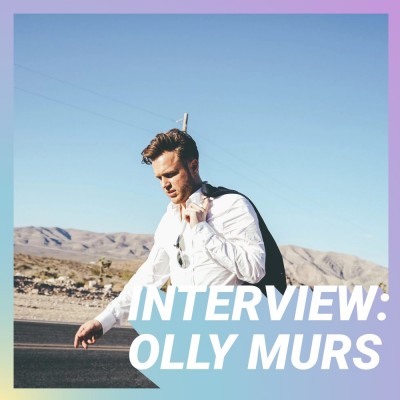 In June, Olly Murs commences a thrilling Summer Tour to perform tracks from his latest awesome album 24 hrs which includes the hit singles Grow Up and You Don’t Know Love alongside the very best hits from his stunning back catalogue.

Olly enjoys a sensational career which has seen him sell a reported 10 million records worldwide including chart topping albums and become a household name beloved by his huge loyal listenership.

Known for his big personality, the lovable Essex Lad was propelled into international stardom through his participation on the TV show The X Factor. His weekly performances won the hearts of viewers and he narrowly missed out on the top spot after making his way right through to the final.

Gigantic was very lucky to speak to the man himself and ask a few questions about his upcoming exciting shows, his tastes in music and how he became such a big star.

Hi Olly, thank you for agreeing to chat to us today. Do you enjoy being interviewed?

Yeah, I think its important. Obviously, its part and parcel of the tour, you know? You’ve got to promote it and obviously I’ve got an exciting summer coming up with the tour. I haven’t spoken to anyone about it really so it’s nice to sort of get the balls in motion. I think I just literally announced it on Twitter and social media and that was it. So, it’s nice to kind of talk about it, get it out there and I’m looking forward to the shows.

We are also really excited for your Summer Tour which sees you play in front of some big crowds. You are known for having an equally big personality, but how do you make that connection with the entire audience?

If they’re at the back of the show or they’re at the front; you’ve got to make them feel part of it and that’s what I try and do really through my personality and performance onstage. We want to try and make everyone feel close to the show and that they really are part of it.

I love it. I’ve been doing this for a long time now. Touring, it’s one of my favourite things to do and I just can’t wait to get out on the road. It’s going to be amazing.

Are there any certain songs that always get the audience particularly excited?

But obviously on the new album we’ve got loads of fun tracks that I can’t wait for fans to hear. It’s going to be awesome!

The demand for your upcoming shows is absolutely massive and they are selling out really quickly! What is it like singing in front of that many people? It must be nerve wracking!

Yeah it is. I mean it is nerve wracking but its so exciting. You know, I’m lucky enough to be doing an arena tour this year as well, obviously before we do the summer tour, and the (lead up to the) arena tour has been fantastic.

What sort of preparation do you have to do?

The tours and anything I do I’m always 100% committed. I’m a professional. So, like anyone in this sort of industry, I work hard. I work on my vocals all the time, I work on my career, my style, everything. Try and make it all work and make it all perfect, you know? I love it.

What was the last show you bought tickets to go see and had to que up for?

What sort of music are you into? What does Olly Murs listen to in his downtime?

But I listen to a lot of everything, really. There’s loads of exciting stuff out there that I listen to that I love.

Are you quite an indie boy at heart then?

So, what has been top of your playlist lately?

House. I love house music at the moment. So, when I’m getting ready to go clubbing, going out with my mates quite a bit and just enjoying some sort of single time at home. Yeah, I’ve been listening to a lot of classic old sort of house music. It’s been great.

Did any of that influence your new album 24 Hrs?

(Laughs) Not really. I’m not sure I could get away with doing a house track! But I hope in the future… you never know! For me, I have my own sort of style, my own sort of music that I do and I like doing pop music.

This album was kinda more inspired by 80’s music, sort of funky kinda 80’s synths and stuff like that.

You have had a remarkable career so far which started with your participation on The X Factor which made you into a household name. Over the years, we have seen many participants come and go but very few have gone the distance and enjoyed the good solid career you have.

Why do you think you have succeed where other contenders and even winners may have tailed off?

I think really its just been hard work and having hits - and having successful albums has helped. I just think it’s been a little bit of luck really. Everything just fell into place for me you know? With my music and my fans and everyone around me just sort of fell for it and loved what I did. It just all sort of fell into place and I don’t really know the answer to that question.

Just working hard and luckily the people bought into my music and my style, what I was doing. So, I’ve been very lucky and its worked.

And finally, what can we expect from Olly Murs in the future? Is there a Christmas No.1 waiting in the wings?

Who knows? A Christmas No.1 would be amazing! I think at the moment I’m just going to finish this year on tour. End of 2017 - who knows?

(In) August I finish so I’m just going to see how the year pans out and see where it goes. At the moment, I’m just happy doing what I’m doing and see let’s see what happens.

Good luck with the shows and we really appreciate you taking the time out to speak to us.

To get the latest news about gigs and events in your area click HERE and subscribe to our newsletter.