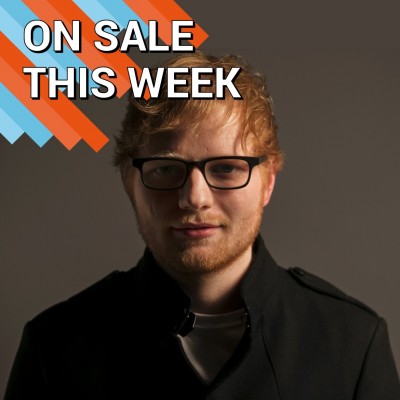 Since breaking through with his debut album + in 2011, enigmatic songwriter Ed Sheeran has gone on to enjoy international fame, sell millions of records across the globe and win just about every award going!

With the upcoming release of his highly anticipated new album ÷ in March, Sheeran has announced a major arena tour for April. Tickets are expected to sell extremely fast so set your personal reminder with Gigantic right now!

Icelandic musicians Sigur Ros are one of the world’s most premier post rock bands. Fusing falsetto vocals with elements of classical music, they capture an ethereal other-worldly sound which enraptures in a way others simply cannot.

They have just announced two nights at Eventim Apollo in London during September which must not be missed. Tickets are released on Friday.

London day festival Citadel celebrates creativity in the city by uniting thrilling music with workshops, a wide range of activities plus compelling talks and debates.

They have just announced their headliners for 2017 with be math rock masters Foals for a UK festival exclusive. Other acts have yet to be announced but you can be sure that they will offer a stunning array of alternative acts.

Penn Festival promises to be one of the biggest music events of the year. Their huge headline acts for 2017 include the almighty Primal Scream, indie heroes The Charlatans, devastating DJ Sigma plus drum and bass extraordinaire Wilkinson.

So, get down to The Big Park in Buckinghamshire for a massive weekender this July!

Each year Splendour bring the very best acts to Nottingham for one big party for the whole city to enjoy. This year they top the bill with cheeky chappies Kaiser Chiefs with many more exciting bands and singers to be announced later.

Held on the beautiful grounds of Wollaton Park, the celebration is the perfect way to enjoy the scorching summer day so book your ticket now!

Living legend Brian Wilson pioneered pop music. Credited with inventing the concept album with the release of Pet Sounds, Wilson came to define the sound of the 60’s and all that followed leaving the likes of John Lennon and Pink Floyd enthralled. See him play the seminal Beach Boys album in London and Sheffield this August. Tickets go on sale this Friday (03/02/2017).

London born starlet Dua Lipa was aged only 17 when she released her first demo onto SoundCloud which astounded listeners with her mature voice and confident song writing ability. Her highly stylised singles New Love and Be The One soon followed and contribute to her 2.6 million views on her YouTube channel.

We have a massive amount of other acts going on sale this week, including:

In the recent years since if first started, Leicester festival Handmade has proved it packs one hell of a punch. Each year they set the tone by presenting the very best up and coming acts that you need to see. They have just announced a huge 30 names joining them which includes Twin Atlantic, British Sea Power, Cabbage, Kagoule and more.

Download Festival at Donnington Park is the ultimate event in a rock fan’s calendar. Attracting attendees from all over the world, Download always brings the heaviest and hardest bands to their stages. In 2017 they boast System Of A Down, Biffy Clyro and Aerosmith as headliners.

Other fantastic festivals on sale with Gigantic include;

Truck Festival / 110 Above / Summer Beats Music Festival / Are You Listening?

Proms At The Castle makes a welcome return after a five year absence. The Bournemouth Symphony Orchestra will put on a sensational show which will be accompanied by a firework display. The previous proms have typically sold out so act quick and book your ticket before they are gone.

Garage rock greats Thee Oh Sees have just announced headline shows at Nottingham, Bristol and Manchester in addition to their appearance at Field Day 2017. Known for playing stunning sets, you can be sure each performance will be incredible.

And finally, we highly recommend you take a look at the following;