Queens of the Stone Age, Dancing on Ice, The Human League, Gary Barlow and much more 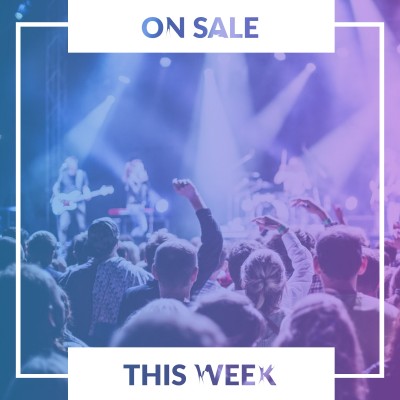 First formed in the mid 90’s, Queens Of The Stone Age have grown to become one of the most inventive guitar bands in a generation. Drawing on elements of metal, grunge and stoner rock, each new record receives widespread acclaim.

Having just released their latest album ‘Villains’ which was produced by Mark Ronson, the desert rockers have rounded up an elite roster of acts for a massive show at Finsbury Park in London. Joining them will be The Hives, Run The Jewels and the one and only Iggy Pop.

Queens Of The Stone Age tickets are available from 09:00 on Friday 1st of December.

Fans are thrilled to hear that iconic skating partners Jayne Torvill and Christopher Dean will be returning to our screens to judge a whole new cast of celebrities who will be put through their paces for the tenth series of Dancing On Ice.

Following on from the hit TV series, Torvill & Dean’s Dancing On Ice Live UK Tour will enable you to get close to the action.

Fantastic retro festival Let’s Rock celebrates the 80’s by gathering together some of the defining acts of the decadent decade to travel around the UK, perform to huge audiences dressed as their favourite subculture from the era.

Join the Let's Rock Scotland when it arrives at Dalketh Country Park in Edinburgh. Their superstar line-up will be announced soon.

This year has seen the return of the almighty Liam Gallagher. The Oasis singer has struck out on his own and topped the charts with his debut solo album ‘As You Were’ whilst seemingly being absolutely everywhere on TV, radio and the internet.

Having sold out every show, he now announces a very special gig at Emirates old Trafford Cricket Ground in his Manchester homeland.

Liam Gallagher tickets are available from 09:00 on Friday.

Take That singer Gary Barlow has risen from his boy band days to become one of Britain’s most successful songwriters having received the illustrious Ivor Novello Award and incredible six times. In addition to his previously announced shows, he now adds an extra date at Sherwood Pines Forest Park which takes place on Saturday 23rd of June 2018. Gary Barlow tickets are available from 09:30 on Friday.

From their early experimental days to their meteoric rise as a pop band who were crucial to defining the 90’s, The Human League have enjoyed a career which has seen the sale of 20 million records worldwide. Join them for their extensive Red Live 2018 tour which takes them right around the UK during November / December. The Human League tickets are currently available.

Incredible indie band The Vaccines have proved to be one of the most exciting acts to break in recent years. Next year sees the release of their highly anticipated fourth album, and so the West London lads heads out on tour to promote their new material. The Vaccines tickets are available from 09:00 on Friday.

With demand always rising, we recommend that you set a personal reminder with Gigantic right now. This sets you ahead of the rest by enabling us to send you a text message or email as soon as your chosen tickets go on sale.

As there are new tickets going on sale all the time it makes sense to keep checking with Gigantic to see what has become available. Take a look at the many events which have become available this week:

In 1998, awesome alt-rockers Garbage released their best-selling album ‘Version 2.0’ which achieved Platinum certification and placed them firmly as a major international act. They celebrate 20 years since the release of their seminal album by playing the record in full at O2 Academy Brixton in London during September.

Taking on influence from the classic C86 sound and the early indie lofi aesthetic, North London based band Girl Ray are proving to be utterly exhilarating every time they perform. Catch them when they play at Sheffield’s The Leadmill and Heaven in London during April 2018.

Gigantic is always the best place to choose from a huge range of essential gig tickets. Take a look at all these great events on sale right now: