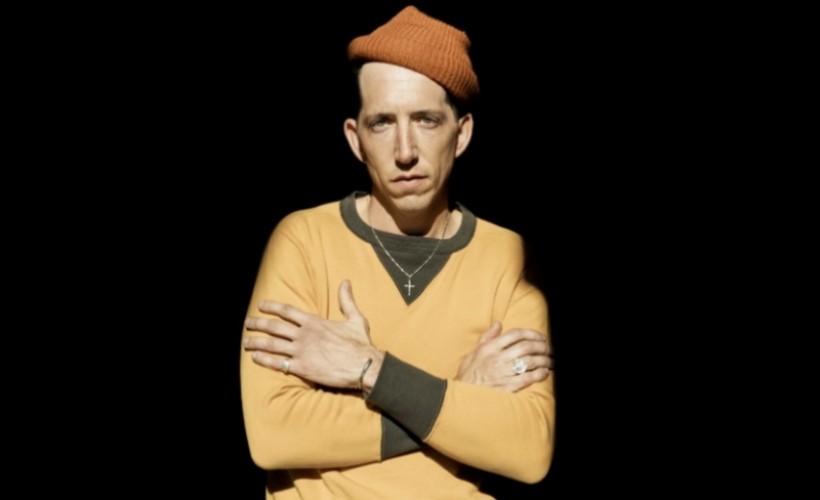 "He's a born showman, terrific vocalist, musician and lyricist with a tight band behind him"

Felt that all there shared my enthusiasm for him

"Stripped Down Pokey Rocks the House"

For years, his band got bigger and jazzier. Now Pokey is touring with a 3 piece backing band, his original guitarist and bassist, with the jazzier drummer added in 2015. His sound is now recognisably 1950's rock and roll, all electric echo.

This new sound is great. It is focussed and less jammy and puts the onus on Pokey to deliver. And deliver he does. He does loads of songs with energy and drive. The band is terrific and the songs work perfectly, no matter when they were first recorded. Pokey is an exciting, strange performer, his Americana now Buddy Holly rock. He sings his heart out.

Koko is an awful venue for comfort - no seats - but the sound, etc is great. Shame, it nearly ruined the gig.

Excellent venue , small so makes for more intimate atmosphere. Pokey Lefarge was as expected , super performance and great interaction with the audience .Would strongly recommend both artist n venue .

Tweet
POKEY LAFARGE will return with In The Blossom of Their Shade on October 15th via New West Records. The 10-song set was produced and arranged by Pokey LaFarge and Chris Seefried and recorded in Chicago, IL & Los Angeles, CA. The collection is the follow up to LaFarge’s critically acclaimed 2020 studio LP Rock Bottom Rhapsody which NPR’s Fresh Air named a “Best of 2020” and an “Album that made an art of escapism.”

In March 2020, LaFarge packed up and left his Los Angeles abode behind, putting his belongings in storage in anticipation of spending extensive time on the road in support of his then-forthcoming album, Rock Bottom Rhapsody. He couldn’t wait to head down to Austin a few weeks later to showcase those songs and launch the album with his band at SXSW. Then the pandemic hit and all of LaFarge’s well-laid plans went into thin air.

Stuck in East Austin with nowhere to go, LaFarge did what he does best: he got to work. He used the sudden change in plans to his advantage, having perhaps his greatest period of personal growth in the midst of the crippling pandemic.

LaFarge offered, “This album is a result of my 2020 experience. Before the pandemic, I was in a dark place but the pandemic actually created the much needed space for me to reflect. Turns out that being completely sedentary for once was a good thing. I found peace in the stillness. I was able to recalibrate what it is I do and why I’m doing it. Who I’m to do it with and most importantly, who I’m doing it for.”

Unlike its melancholy predecessor, In the Blossom of Their Shade showcases the positivity of coming out of the darkness and into the light and is one of his strongest and most mature lyrical efforts to date. The record was nearly titled Siesta Love since it captures the thematic notion of being the perfect summer afternoon soundtrack and is a far cry from the swing and blues-infused songs of his earlier work. Looking in, inspired by the deep soul not just from these shores, but from distant geographical places like Africa or South America, LaFarge set out to create a body of work that paired emotional lyrics with a killer groove and grabby melodies.

Pokey LaFarge is a singer, songwriter, guitarist, recording artist, poet and actor living in Los Angeles. Raised on a healthy diet of blues, bluegrass, ragtime, Western swing and old- time country, the Illinois native writes timeless, multi-hued songs that reflect his refined good taste, as well as the wide variety of influences and rhythms he’s absorbed over a decade-plus spent traveling and performing around the globe.

LaFarge made his recording debut in 2006, with the self-released album Marmalade. In 2009 LaFarge founded the group Pokey LaFarge & the South City Three when a group of three musicians joined him: Joey Glynn (bass), Adam Hoskins (guitar) and Ryan Koenig (harmonica, washboard, and snare drum).

The group is based in St. Louis, Missouri. As of late 2012 / early 2013, the group were joined by TJ Muller (cornet) and Chloe Feoranzo (clarinet).

In 2017 he released the acclaimed Manic Revelations, and has developed a devoted following on both sides of the Atlantic. He has toured as an opener for Jack White, who released 2013’s Pokey LaFarge on his Third Man Records, and played everything from humble nightclubs to big stages like the Ryman, Red Rocks and Bonnaroo. He made his big-screen debut in 2013 as a saloon singer in Gore Verbinski’s The Lone Ranger, and in 2017 portrayed country legend Hank Snow on the CMT series Sun Records.

Having toured extensively with backing by the South City Three string band and an ever- shifting cast of additional players, LaFarge is now playing occasional solo shows while focusing on finishing his first book of poetry. He’s hoping to release it in 2019, a year which should also see a new batch of Pokey LaFarge music featuring some as-yet-unnamed collaborators.

Fans will need to book their Pokey LaFarge concert tickets early as there are only limited amounts being put on sale by the event organisers - so book yours before they all go! Gigantic has taken home Nottingham Post illustrious ‘Retail Business of the Year’ award for providing excellent customer service on a wide range of essential gig tickets, so you can be sure we are the very best place to come whenever you are planning your big night out.

Hurray For the Riff Raff