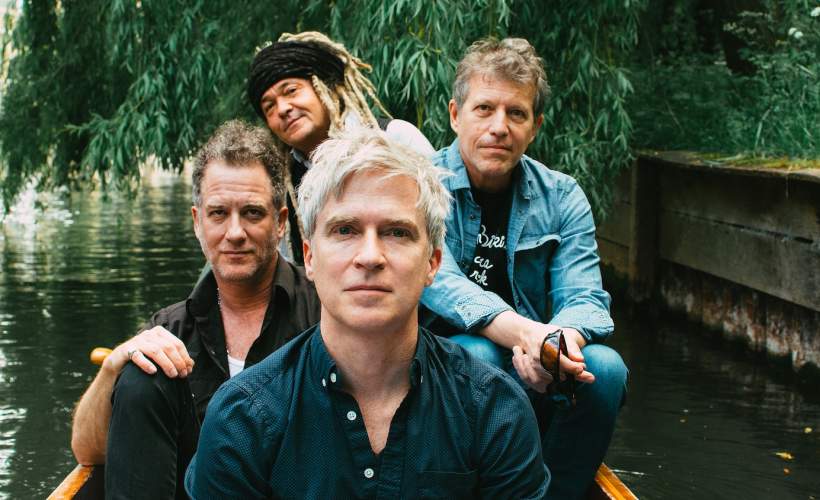 Having recorded five albums in ten years and toured extensively in support of all of them, Nada Surf - singer/guitarist Matthew Caws, bassist Daniel Lorca, drummer Ira Elliot and guitarist Doug Gillard (now official fourth member, more on that later) - opted to follow 2012’s cracking The Stars Are Indifferent To Astronomy with a brief but well-earned hiatus.

So, in January 2015, when Caws informed Nada Surf’s vociferous Facebook following that a new record was just about done, the news was greeted with explosive enthusiasm. The music was in the can, he announced, and all that remained was to finish up a few lyrics and sing a few vocals; something he planned to do on off-days off during an upcoming solo acoustic tour. Caws even included a photo of the recording set-up he was bringing in the car.

“I was so eager to have an album done that I believed in it as it was,” Caws recalls. “But the great thing about being 'finished' is that you can take a breath and evaluate, because the pressure to 'do it' is gone. The more I listened and thought about it, the more I realized that I might want to keep working. Also, I'd sent the tracks to my friend Josh, who runs Barsuk Records, the label we’ve been on since 2002, and he said 'It's great,' but followed that with a pregnant pause. I got the message. I didn't take that as a critique as much as a belief that I could do better. It was very freeing,” Caws continues. “There were already a bunch of songs in the can that we all liked, so I could think more expansively about what the album could be."

Caws’ instinct to heed his inner editorial voice proved to be spot on: he dropped a few songs, tweaked others, and wrote a few more that, “definitely feel different from what we’ve done before,” he says. “Believe You’re Mine” was rejiggered and sped up, while “Cold To See Clear” - originally penned for a collaboration to be named later with Michael Lerner of Telekinesis - was deemed a better fit for Nada Surf. Just before starting You Know Who You Are, Caws had gone to Los Angeles to write with Dan Wilson, who in addition to his success with Semisonic, has won two Grammy Awards for his songs with Adele and the Dixie Chicks. They weren't writing for anyone in particular, they just wanted to see what would happen. Caws felt so good about “Rushing” and “Victory's Yours," that he asked Wilson if he could include them on the new Nada Surf album. Wilson gave the green light, and even offered to contribute backing vocals. When the band returned to Hoboken, NJ for another round of sessions with producer/guitarist Tom Beaujour (Jennifer O'Connor, Amy Bezunartea), the songs were tracked.

And lo and behold, what would have been another really good Nada Surf album (their seventh since getting signed to a major in the go-go 90's and scoring a worldwide alterna-hit with “Popular”) became what could well be the most representative collection of the group’s two-decade career, all while pushing towards whatever comes next. While the band has always had a surplus of horsepower for velocity rockers and an astounding level of confidence live, they've been gaining the discipline and finesses to change gears, more so with each release. Captured in the album’s 10 tracks is every beloved facet of the band, but You Know Who You Are also finds much on offer that stands apart from anything previously heard in the band’s diverse catalog. “Animal” is a stream-of-consciousness Dylan-by-way-of-the-Stones existential love song, while “Gold Sounds” somehow manages to be equal parts Krautrock and folk rock. The latter track had its genesis in a South By Southwest queue as Caws made small talk with a fellow gig-goer who turned out to be General Manager at St. Louis’ independent, non-commercial KDHX. Caws was standing with sometime touring Nada Surf keyboard player and occasional mixing collaborator Louie Lino, now running Resonate Studio in Austin. "Maybe we should make you a jingle,” Caws suggested.

Unable to resist the challenge, Caws and Lino banged out a classic radio theme song for KDHX Program Director Chris Bay’s weekly “Gold Soundz” broadcast. The tune snuck into band practice and then morphed at the Nuthouse from a 30-second ditty into something else altogether, thanks in large part to Elliot's hypnotic beat and the “wild twinkly magic” contributed by Gillard. "I still don't understand how he did that," Caws says. "It’s like Zeppelin flutes played by a unicorn." “Gold Sounds” serves as an ideal reminder if one is required that Caws might be the tunesmith and man up front, but Nada Surf is now and has always been very much a band.

“I may write the songs," Caws says, "but we put them together together.”

Some of the new sonic diversity must be due to Gillard's ever-growing presence, touring with the band since 2010, but a newly official fourth member. While he recorded a lot of overdubs on the last two albums, this time Doug was involved from the first practices onward. Known for his vaunted chops and keen melodic sense, honed as a member of such iconic Ohio outfits as Guided By Voices, Death of Samantha, and Cobra Verde, Gillard adds spark, heft and heightened interplay to Caws’ personal, prismatic songcraft, making a sound that was already melody-rich and hook-filled even richer.

After taking a detour with 2013's Minor Alps collaboration with Juliana Hatfield, his first after thirty years of writing songs, Caws has returned as a writer more willing than ever to follow wherever his gut takes him. Nada Surf are chasing their own worlds, their own kind of connections with listeners. “Sometimes it feels like, to our audience at least, we are two or three different bands at once,” Caws concludes. “It seems some people are looking to feel better, for encouragement getting over their obstacles, for help figuring life out… not that I've done that myself, other people are looking for love songs, and then some others just want to rock.”

There are only ever limited supplies made available for every event and so with only so many Nada Surf concert tickets to go around, you will need at act fast and book yours before they are all gone. Gigantic offers excellent customer service in helping you choose from our wide range of essential gig tickets, so always make us your first choice whenever you are planning your big night out.

NADA SURF release a new video for ‘So Much Love’

NADA SURF release new single ‘Something I Should Do’