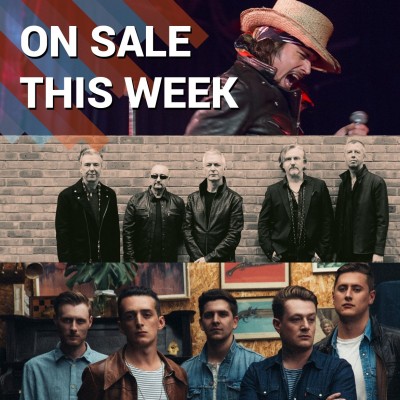 Welcome to this week’s lowdown on all the great tickets we have on sale.

Hot off the heels of their recent album, Thunder hit the road with a huge tour covering all corners of the UK. Known for their huge riffs and equally huge live productions this is a tour not to be missed!

Following the rave reviews of his Apple Music Festival performance, Elton John announced the first series of Crazy Wonderful night outdoor concerts in summer 2017 last week.  Demand was unprecedented, so much so that further dates have been added in Twickenham, Blackburn, Peterborough, Ipswich and Widnes! Tickets go on sale Friday 10am. Do not miss out in seeing this legend do what he does best! Expect to hear all the hit including this banger below!

Following the success of the retrospective tour Kings of The Wild Frontier, Adam Ant returns to the live arena next year with a huge tour dubbed ANTHEMS The Singles Tour. Antmania swept the nation in the early 80s and with this announcement it will not doubt sweep the nation again! Tickets go on sale Friday 10am. See all the dates listed here.

The British institution Strictly Come Dancing returns to our TVs this weekend, with a superb line up of celebs it is no doubt the most anticipated year! Following the show, the 2017 tour will be visiting arenas across the UK to celebrate its 10th Anniversary. With a new host, former contestant Anita Rani and the dancers to be confirmed it will no doubt be an unforgettable night. Check out the trailer below. Tickets on sale Friday 10am here.

This week saw the announcement that Boy George and Culture Club will be reforming for a one-off performance at London’s Wembley Arena, having sold 100m singles and 50m albums the demand for these tickets will be huge! Don’t miss out when tickets go on sale Friday 9am.

To celebrate the release of their forthcoming fourth album, All These Countless Night released on January 27th 2017, Deaf Havana have announced a huge tour for Feb next year! Frontman James Veck-Gilodi had this to say; “We’ve been sitting on this album for so long now that I’m literally itching to get out on the road and play some new songs. It’s been a long while since we have done a proper tour of the UK and to say I can’t wait would be a tremendous understatement, 2017 will be a good one!” Tickets go on sale Friday 10am here. Check out their recent video Sing below.

Finally, the crew behind The Great Escape yesterday announced First Fifty, showcasing the acts that will storm next years festival circuit. Check out the acts here.

This is just the tip of the iceberg of the shows we have on sale. Also check out tickets for Harlem Globetrotters / Peter Hook & The Light / Banks / The Divine Comedy / The Stranglers / Daniel O'Donnell / Soul II Soul / Donavon Frakenreiter / Kevin Devine / Yussef Kamaal / Slick Rick / BE Play Live / INHEAVEN / Georgie / Her / Eyre Llew / Lanterns On The Lake / Jacob Whitesides

Sign up to our newsletter here to get the top picks direct to your inbox!