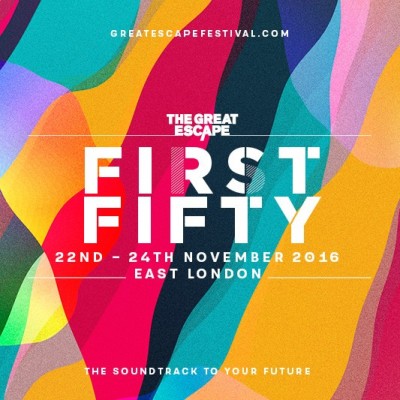 First Fifty gives a first look at acts destined to take TGE 2017 and by storm.

Festival season starts here! Known for bringing the best homegrown and international music to Brighton every year The Great Escape is an essential entry in the UKs festival calendar. And 2016 they introduce FIRST FIFTY a series of exclusive gigs over 3 days in East London from the hottest new acts around.

For the first time ever, this November 22nd – 24th, The Great Escape comes to the musical hotbed that is East London to celebrate the announcement of the FIRST FIFTY acts playing 2017’s festival with this very special series of gigs featuring some of the most highly anticipated talent to feature on the announcement. Hoxton Square Bar & Kitchen, The Old Blue Last, Kamio, Zigfrid von Underbelly and The Courtyard Theatre will all play host to shows.

The CEO of Mama Festivals Rory Bett says “Over the last 11 years The Great Escape has been providing the soundtrack to our future with over 3,750 artists showcasing in Brighton and today’s announcement of the FIRST FIFTY previews the next wave of artists set to go down in TGE history. No other festival out there launches in this way with 10 live gigs and the best thing is that this is just the start, we’ve still got another 400+ bands to announce in the new year!”

Tickets are on sale now for all the events here