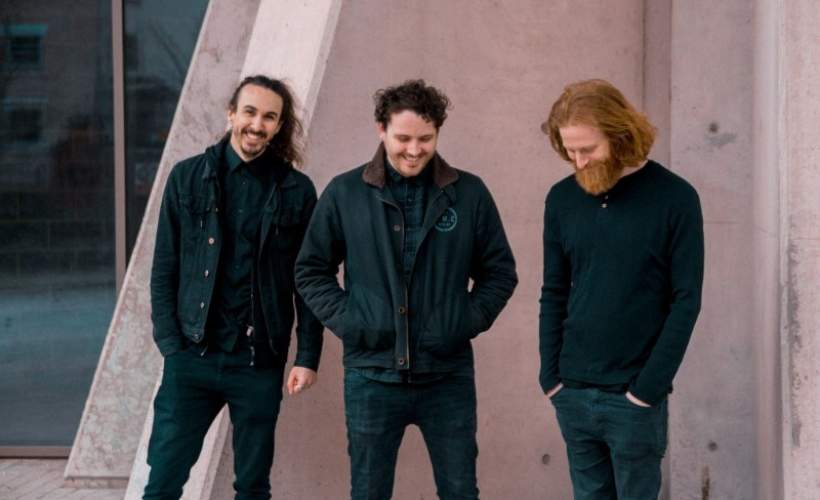 A monumental event celebrating the release of their debut album 'Atelo'. Well coordinated, Desert Mountain Tribe were an awesome support band who really suited the event.

Eyre Llew truly rose to the occasion, wowing the entire audience and playing better than I have previously ever seen them.

Plus, the DJ's were the best I've had the pleasure of enjoying in a long time.

Massive thanks to Gigantic. Found it was the easiest way of booking I've ever come across, plus the tickets came quickly and the booking fees were not stupidly expensive like other sites.

I hadn’t heard the band before but thought it was worth a look. I was amazed how well they played and bought two CD’s on the night. I would love to see them again.

"The UK's version to Sigur Ros"

Forth time i've had the pleasure of seeing Eyre Llew, and every time has been a pleasure. This band are clearly influenced by some of the finest ambient sounding bands around, Sigur Ros for starters, but with a heavy dose of Bon Iver as well. For just a three piece they make the most beautiful landscaped sounds, buildiung up to a cresendo of wailing guitars, paino and the simpliest of drum beats. Doing so well in Asia, surely just a matter of time before they are finally recognised for their stunning sound in the UK as well.

"When you leave, you leave complete"

This was the second time I’ve watched an Eyre Llew performance. Yes, I did say ‘performance’. That’s what you get...visually and sonically. It’s so easy to find yourself completely immersed in it all. Very uplifting. Go see ‘em. Go by their music.

Just an amazing band with a unique sound that creates such an emotional performance.

“Eyre Llew are one of the most exciting new bands to emerge from Nottingham's currently thriving music scene.” - Dom Gourlay, Drowned In Sound

They have already announced shows for the new year in promotion of their upcoming EP, including Thousand Island in London, The Bodega at Nottingham, Hyde Park Book Club at Leeds, Sneaky Pete’s at Edinburgh and Bristol’s Crofters Rights during April 2019.

Excitement is already high and still rising as is the demand, so make sure you do not hang about and book your tickets for Eyre Llew before they are all snatched up. Fortunately, placing your order with Gigantic is made easy as your purchase can be made 24/7 at home or on the go using your smartphone, tablet or computer.

“Eyre Llew are a rare band. They write songs that lure you into a false sense of security and batter you with their breathtaking beauty, they put on incendiary live sets and they give everything a cinematic sheen that makes it seem hyper real. They have just released their highly anticipated debut album Atelo” - Cai Tefor, Gigwise

“Each song tells its own story through a rush of feeling. Atmospheric guitars, ambient synths and a whole load of reverb strip everything back to the bare bone. All individual masterpieces that deserve to be played in a miniature Sistine Chapel placed in the corner of Valhalla.” - Katie Beard, NUSIC

We really do urge you to make sure you book your Eyre Llew concert tickets early as they are expected to sell very quickly. Matching our vast array of essential gig tickets with excellent customer service, Gigantic was named by Nottingham Post as their ‘Retail Business of the Year 2017’, so you know we are best place to come to make your booking when looking forward to enjoying an unforgettable experience.

"One of Nottingham's most exciting prospects in years" - Nottingham City Council

"They've become the most talked about new band in the city...they're a revelation standing out like sore thumbs amongst the has-beens and never-will-bes." - Drowned in Sound (Splendour Festival review)

"A formidably accomplished performance" - God Is In The TV Zine

"Outstanding track of 2014! Not to be missed" - Arctic Drones

"Beautiful ambient builds and large swooping and sculpted soundscapes. They were a welcome change from the intensity of the other stages." - Yeah Buddy DIY

"(Eyre Llew)...wowed the crowds into silence with their beautiful sounds." - NUSIC (live review)

Get tickets to see Eyre Llew in April with Gigantic.

Eyre Llew are essential this August!

EYRE LLEW celebrate the release of their debut LP 'Atelo’

plus much more all available through Gigantic!